The Illusionist is a semi-silent film about an old-fashioned conjurer at the end of the 1950s, specialising in rabbits and hats, paper flowers and coins. He presents each creaky trick with a deadpan fastidious flourish and a raised forefinger. In a pub in the Scottish Highlands, a star-struck girl tags along, running away to join him in Edinburgh where the movie winds up, and the illusionist becomes disillusioned but brings off an authentic act of human magic. 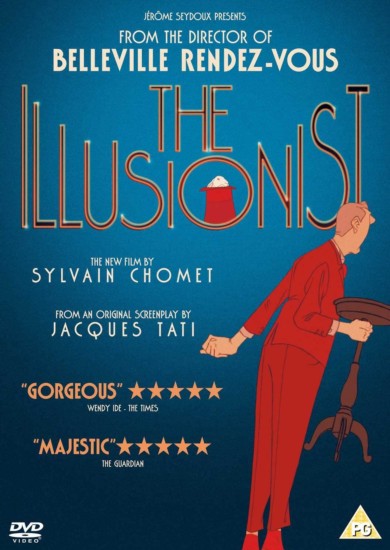 Following his delightful animation 'Bellville Rendezvous' (2003), Chomet was given permission by Jacques Tati's daughter to work on an unfilmed screenplay her father had worked on in the late 1950s. This material has now been made the basis of 'The Illusionist'. The film's themes are the passing of times, changing fashions, growing up and growing old. Chomet decided to set the film in Edinburgh, having fallen in love with the place during a visit with 'Belleville Rendezvous' in 2003. The movie begins in Paris in 1959, where the protagonist, Tatischeff is performing as a vaudeville magician with a rebellious rabbit. Things are not going well for him and he decides to try his luck elsewhere, taking the ferry across the channel to Dover. Britain is seen as a sad, unwelcoming place, peopled with eccentrics, in a rain-drenched London of 1959. But the country is changing with the advent of British rock and roll, so the old trouper moves north, going by train and ferry to the Western Isles of Scotland. But here too, time is catching up with the magician. Electricity is reaching the highlands; a jukebox playing rock music is installed. However, a young servant girl, Alice, takes him for a real magician and her devotion is such that she follows him, living with him in a run-down hotel, largely inhabited by seedy old vaudevillians, a ventriloquist, a trio of acrobats, a suicidal clown. 'The Illusionist' is a wistful, melancholy affair, but the Edinburgh it depicts is an enchanting place and there are wonderfully comic moments. It is a deeply moving, exquisitely crafted, elegaic film, eliciting chuckles rather than belly laughs. Those who like it will like it very much and take it to heart.
Philip French, The Observer - August 2010


What you thought about The Illusionist

you perceived differences between the two and gave grades for each film, ‘Safety Last’ was considered excellent in 6 cases and good in two. Conversely, ‘The Illusionist’ was thought excellent in two cases and good in six. Many of you thought that both films were ‘classic gems’, with a superb mix of music and animation in ‘The Illusionist’. There was general admiration for the intelligence in both films, an appreciation of ‘wry humour’ and ‘subtle atmosphere’ as well as ‘daredevil escapades’ in ‘Safety Last’ and the tension they created. Some comments drew attention to ‘the sense of innocence’ in both films, with special references to the remarkable art work of ‘The Illusionist’. Both films clearly entertained, with a light but thoughtful touch, showing insight into social pressures (success in ‘Safety Last’, a world changing in ‘The Illusionist’). ‘Inventive’ and ‘magical’ were adjectives commonly used about both films. ‘The Illusionist’ had a wistfulness and pathos’ but was set in ‘extraordinary naturalistic detail’, particularly of Edinburgh, and was overall a ‘lovely meditation on a period of light entertainment history in passing’. There wasn’t much criticism; two or three responses found ‘Safety Last’ too long and predictable and about the same number found ‘The Illusionist’ attractive on the eye but slow and not going anywhere.