A mother's last wishes send twins Jeanne and Simon on a journey to the Middle East in search of their tangled roots. Adapted from Wajdi Mouawad's acclaimed play, Incendies tells the powerful and moving tale of two young adults' voyage to the core of deep-rooted hatred, never-ending wars and enduring love. 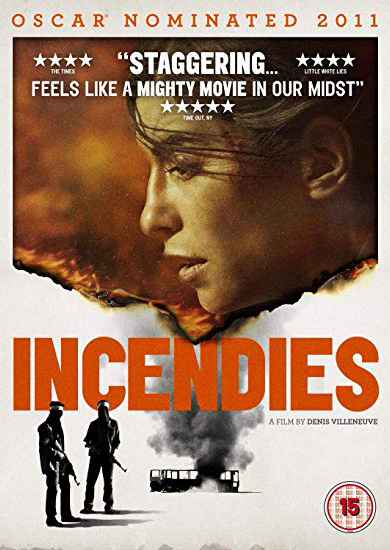 This new film from Canadian director Denis Villeneuve is based on a Wajdi Mouawad's 2003 play 'Scorched'. It's an image of women and children slaughtered on a burning bus during the Lebanese Civil War in the 70's and the image extends to the incineration of history, of memory and the bitterness of visiting the charred remains of violence and tragedy. The story begins with an ageing expatriate Lebanese woman in Quebec being mysteriously struck dumb at a swimming pool. After her death, her grown-up children discover from the will that they have a brother about whom they knew nothing and a father still living. Now they must travel back to Lebanon to find them both: it is a journey into a dark and terrible past. Villeneuve touches on myth and memory and tangentially on North American politics of identity and grievance. It is an intriguing movie, in some ways contrived, with bizarre final revelations. Nonetheless as a cinematic prose-poem, it has undoubted force.
Peter Bradshaw, The Guardian - June 2011
'Incendies' is a remarkable and intelligent film about family and conflict. In essence it is a family drama, astonishingly intense but impressively poised. It begins in the style of a detective thriller, yet its climax is reminiscent of Greek tragedy. The twin children of Nawal, a recently deceased woman from the Middle East, are summoned by a notary for the reading of her will. He hands them each an envelope: one for their father, who they thought was dead, the other for a brother they never knew existed. Jeanne immediately sets off for the Middle East to uncover the mysteries of Nawal's life. Simon, who clearly has issues with his mother, initially stays behind, but then relents. What the twins uncover in Lebanon is shocking. But the main character is Nawal, superbly played by the Belgian-Moroccan actress Lubna Azabal. Her scenes are all in flashback – her story features child soldiers, episodes of war, terrorism and sectarian violence. Events inexorably lead to a shocking ending, which at first feels like a plot twist. Then you think back and realise it was embedded in the narrative from the very start. 'Incendies' is a remarkable work and its complex story etches itself on the memory.
David Gritten, Daily Telegraph - June 2011

What you thought about Incendies

There was overwhelming praise for ‘Incendies’ and your responses constitute the highest percentage of ‘excellent’ and ‘good’ for this season’s films so far. This remarkable and powerful film about hatred, sectarian violence and civil war, told largely in flashback, struck deep for many of you: “overwhelming”, “gripping”, “brilliant”, “truly important”, “superbly realised”, “a message about the futility of conflict”, “extremely compelling” and “a tragedy which felt inevitable but not predictable”. You were very impressed by “the horror of the story as it unwinds” and “the complexity and the detail of the narrative”, of this “chilling, horrifying and quite extraordinary film”. The power of the “multi-layered complexity” of events led to some responses finding a condemnation of war, a plea for reconciliation and forgiveness in peace and “a kind of redemption” in the meaning of the film. The ending drew parallels with Greek tragedy and drew praise for the way it was “painfully drawn together”, to make, for another viewer, “the saddest story I’ve ever seen”. One response drew attention to the quality of the film by saying “I watch the news every night and I think I’ve become immune to war journalism. This film shocked me in a way the news fails to anymore”. Interwoven in a great many responses to the power and horror of events in the film were tributes to superb direction, outstanding acting performances, sensitive and intelligent structure and cinematography, and the impact of the musical sound track. There was no doubt then, about the collective view of the quality of ‘Incendies’; about ten per cent of you felt that it was the best film so far shown by the film society.