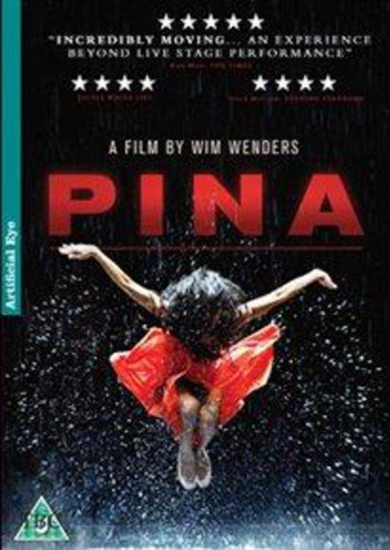 ‘Pina’ is a tribute to Pina Bausch, the German dancer and choreographer who died in 2009. Her work has appeared on film before; Pedro Almodovar’s ‘Talk to Her’ uses the dance “Café Muller” as an emotional touchstone. That piece, an obstacle course of wooden chairs and wild emotions, figures prominently in ‘Pina’, encapsulating both Pina Bausch’s aesthetic and Wim Wenders desire to replicate on screen the depths and distance of the staging. The dances in ‘Pina’ take place on traditional stages and also on city sidewalks and tram cars in Wuppertal, the north western German city where Bausch’s company is based, in forests and fields and in what looks like a portable box. Alternating between highly stylised precise gestures and more flowing and expressive movements, the dancers enact dramas of desire, sexual violence and the passage of time. The cumulative effect is exhilarating and the power and intelligence of Bausch’s approach is directly and dramatically communicated. There are moments when her discipline and Wim Wenders visual instincts harmonise perfectly so that you are experiencing dance and film, fully and simultaneously. In addition to performances, ‘Pina’ includes interviews with dancers with words dubbed over silent, contemplative faces. Instead of talking heads, they are thinking bodies, reflecting on the influence of their mentor. Their devotion to Bausch is evident in the glowing tributes they offer. Diverse in age, body type and background, the dancers convey their awe and gratitude in personal and touching terms. Choreography is a notoriously perishable art. Dancers often struggle to outlive their creators. And ‘Pina’ is above all, an act of preservation, a memoir that is also a defiance of mortality – completely alive in every dimension.
New York Times - December 2011
This collaborative, poetic documentary explores the work of experimental dance pioneer Pina Bausch, who died in 2009. It’s both a tribute to an artist and a celebration of an art form. Wenders shoots the members of Bausch’s company long-established company performing her most significant pieces both in a theatre environment and outdoors in unusual locations, from the inside of a train to the edge of a quarry. The camerawork is as sublime as the performances. It’s a beautiful and moving film.
Time Out - February 2011

What you thought about Pina

The impact of Wim Wenders’ documentary ‘Pina’ was immediate and intense. You found it “beautiful and thought-provoking”, “very painful at times”, “emotionally highly-charged”, “bold and aggressive”, “both subtle and blunt at the same time”, “giving a mounting and progressive excitement”. The range of feelings and emotions within the dance sequences also made its mark; “an amazing exploitation of emotion and much more”, “awe-inspiring and very moving”, “impressive and uplifting in the range of emotions communicated”, “contained a powerful elemental, almost animalistic strand alongside elegance and sophistication”, “brilliant and beautiful to watch”. Several of you commented with pleasure on the age range of the dancers involved, finding in that a great challenge to expectations and assumptions. The film had the quality of involvement too - “I was amazed how I watched the first movement and felt part of it right up to the very end” - and celebrated both individual and collective creativity “huge admiration for the dancers’ individuality and their ability to move together as one”. There was a “compelling physicality” in the choreography which created great vitality and continuity in the dance sequences. Within the overwhelming positive reaction to the film, there were some reservations. Some responses indicated that the whole piece was too long and that abrupt changes in focus led to complication and confusion, “like a book with all the pages jumbled”. There was some criticism of the film’s structure, in that the individual interviews interrupted and to some degree lessened the power of the dance. There was great appreciation for Karen da Silva’s introduction which provided an artistic context and created confidence in an audience uncertain how to approach, what was for many, a new art form. 15 out of 34 responses (45%) made specific reference to the enjoyment of the evening being “greatly enhanced” by the helpful and well-focused introduction.