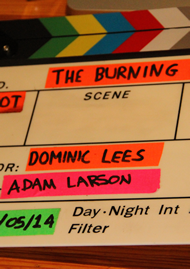 In keeping with the objects of the Society, GFS responds positively to opportunities to contribute to community initiatives. This page is dedicated to reporting on the filming and general progress of the short film "The Burning", written and directed by Dominic Lees and sponsored by the Society.

It is 1558. In a small village in the South Downs, villagers hear the church bell toll to declare the death of Mary Tudor, Catholic queen of England. The devoutly Protestant community has been terrorised by Mary’s suppression of dissent. Richard’s elder brother was burnt at the stake for his role as a Puritan lay-preacher: now the village wants revenge against the local Priest who accused him of heresy. But the Priest has fled; they spot his altarboy on the run and Richard leads a chase to capture the child. The villagers believe that the child will lead them to the Priest. But their anger drives them not to justice, only to a collective crime that will curse their community forever.