An irresponsible sociopath and car thief kills a policeman and tries to persuade a hip American girl studying journalism at the Sorbonne, whom he had met in Nice a few weeks earlier, to hide in Italy with him. 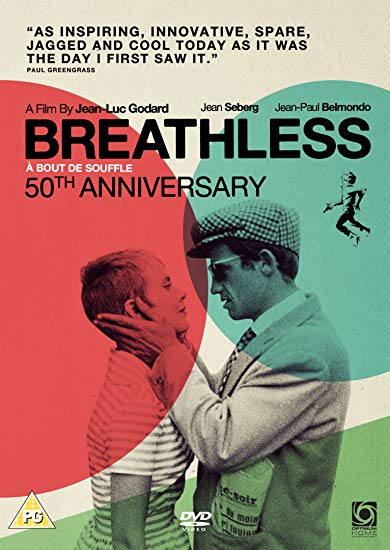 In 1960, a director by the name of Jean-Luc Godard burst onto the scene and shattered the film community's preconceptions of what was essential in a film. Prior films would push that every film needed a decipherable beginning, middle and end. A film couldn't be free-form and flowing and everything had to serve a purpose. In this sense Godard created a thematic revolution. It is a film that nobody saw coming – a landmark and influential film in its own right. Breathless' best feature is that it feels like jazz. Just as jazz is free form music, this is free form film. Characters dance through their roles, Godard tiptoes through violence, jumpcuts to random points in conversation. This is not your typical 1960 era film. The film is a fresh and enjoyable experience, one where Godard knew exactly what he was doing with every frame of his film. Worth seeing for its historical importance, Godard's 'Breathless' is a rebellious film that lay the groundwork for superior films to be created in its stead. I can't imagine what film today would be like had Godard not made 'Breathless'.
Matt Goodman, Smart Popcorn - January 2005
'Breathless' is, despite its pile-up of gross indecencies, a fascinating communication of the savage ways and moods of some of the rootless young people pf Europe (and America) today. Made by Jean-Luc Godard one of the newest and youngest of the 'new wave' directors in French cinema, it goes at its unattractive subject in an eccentric photographic style that sharply conveys the nervous tempo and emotional power of the story it tells. This should be enough to warn you that this is not a movie for the kids or the easily shockable. It is emphatically unrestrainedly vicious, completely devoid of moral tone, concerned with the drive of a cruel young punk to get along and the element of youth that is vagrant, disjointed, animalistic and doesn't give a damn for anybody or anything. The film progresses in a style of disconnected cutting that is a form of 'pictorial cacophony'. A musical score of erratic tonal qualities emphasizes the eccentric mood. But say this, in sum, for 'Breathless': it is certainly no cliché in any area or sense of the word. It is more a chunk of raw drama, graphically and awfully torn, with appropriately ragged edges, out of the tough underbelly of modern metropolitan life.
Bosley Crowther, New York Times - February 1961
The 50th anniversary release of Godard's Breathless is aother opportunity to marvel at the sheer joie de vivre of this film, at its pure, raw, chaotic newness – still fresh after all this time – and at the fascinatingly and exasperatingly unschooled quality of Godard's film-making. The whole movie is one continuous, inspired cine-jazz solo. There is simply no other film which demonstrates so perfectly what it feels like to be young and in love.
Peter Bradshaw, The Guardian - June 2010

What you thought about Breathless

The key question about a film like ‘Breathless’, considered so innovative and ground-breaking in its day (1960), is whether it stands the test of time. Responses from members divided roughly into three categories: those who considered the film retained intrinsic power and quality; those who recognised its quality but saw it largely of its time and superseded by better, more modern film and those who found few merits in it whatever its social and historical context and of little appeal today. Enthusiasts for the film enjoyed its ‘great photography and sound track’, ‘terrific central acting performances’, ‘stunning cinematography’ and its ‘helter-skelter pace’. There was a sense that the film was ‘quite modern in every way’ with a commendable focus on dialogue and reflection as well as action. Those who enjoyed the film but in a more guarded way, liked ‘the inconsequentiality of the dialogue, but the sense of something underneath’ but felt that what was originally free from cliché, now seemed over familiar and simple. It was ‘very 60’s’ and enjoyable in that it took you back and there was no doubt about the ‘creative camerawork’, ‘the terrific musical score’ and that the film was ‘enormously atmospheric’ of Paris in the 1960’s. For one viewer ‘what was a landmark in its time is rather laboured today’ and there were several remarks on the importance of the 1960’s context to appreciate how ground-breaking the film was. There were more critical responses however: ‘I kept on waiting for it to go somewhere but it didn’t’, ‘50 years on and I thought it rather a bore’, ‘a classic but hopelessly dated’, ‘the best aspect was the music’, ‘this has not stood the test of time – it was dull, dull, dull’ and ‘very slow moving and I didn’t see the point’. Responses to ‘Breathless’ raised some wider issues of the place of ‘classics’ in the society’s programme. Opinion is equally divided between those who like an ‘educative and historical’ strand and those who prefer films of current impact and quality.