A 19th-century French aristocrat, notorious for his scathing memoirs about life in Russia, travels through the Russian State Hermitage Museum and encounters historical figures from the last 200+ years. 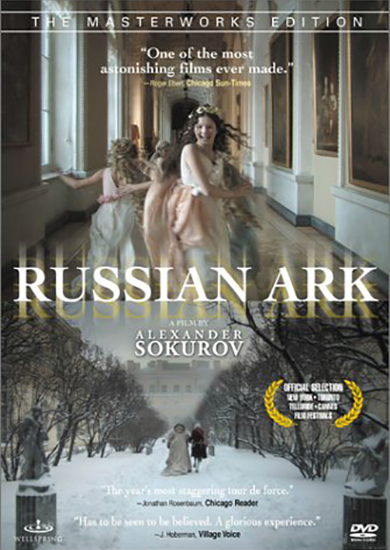 Russian Ark is a magnificent conjuring act, an eerie historical image evoked in a single sweeping wave of the hand by Aleksandr Sokurov. The film, shot in high definition video in the Hermitage in St Petersburg, consists of one uninterrupted take. The camera floats through the museum's galleries and rooms as a cast of 2,000 actors and extras act out random, whimsical moments of Russian imperial history that dissolve into one another like chapters of a dream. Russian Ark is a ghost story, set in the Hermitage, the repository – the ark if you will – of more Russian history and culture than any other place. It evokes a sense of history that is at once intimate and distanced and ultimately sad: so much life, so much beauty swallowed in the mists of time. The film is narrated in a thoughtful murmur by a contemporary artist who awakens to find himself lost in the 1800s amid a jostling crowd pouring through a side entrance. He encounters another out-of-place figure, the Marquis, a 19th century French diplomat, the only person to acknowledge his presence. As the two strays wander from gallery to gallery they chance upon Peter the Great and Catherine the Great. In another, darker time, the Marquis stumbles through the wrong door and finds himself amidst drifting snow, listening dumbfounded to a description of 20th century horrors that have yet to take place. It is a film of all Russian history in one glittering, unbroken take.
Stephen Holden, New York Times - September 2002
The film is a staggering feat of cinematography. It uses a single continuous shot that takes you through St. Petersburg's Hermitage into the dark recesses of Russian history. A contemporary figure (unseen, but voiced by Sokurov) is mysteriously cast back into the past where he meets a 19th century foreign diplomat. Together they wander through the Hermitage, slowly traversing Russian history from the 18th century to the present. Sokurov offers a dazzling display of choreography, as hundreds of extras effortlessly hit their marks, keeping the single shot unbroken. Whirling through crowds, racing up staircases, meandering through art galleries and snowy courtyards, the camera performs a scintillating ballet that covers 1500 square metres and over 35 different rooms. The film's grand finale, as the camera waltzes its way through a packed ballroom full of dancers, is a beautiful and haunting sequence that turns the stupefying into the spectacular.
BBC Film Review - February 2003

What you thought about Russian Ark

This film certainly provoked an audience reaction! The evening was notable for the animated discussions that took place once the lights went up – and by the creative writing the many of you contributed on your reaction slips. Too much to include everything here! Opinions were divided. For roughly half of you, the film was: Fascinating; mind boggling; magical; wonderful; a visual treat; extraordinary; a most original, intriguing, colourful and impressive film; an amazing feat; beautifully directed; atmospheric; haunting; beautiful costumes; a beautiful journey through the Hermitage; a fascinating experience; fantastic background and music; great venue; evocative - conjuring up an era full of pomp and cruelty – and what a magnificent score; ultimately very moving and tinged with sadness; like a dream sensation of being in a huge crowd. There was acknowledgement of the technical and production virtuosity involved: Cinematically brilliant; superb achievement in cinematic photographic art; technically amazing; technical ‘tour de force’; amazing that it was shot in one take; However, most of you had issues of comprehension! Loved it– but didn’t understand it all (but didn’t matter); a better understanding of Russian history might have made the film more fathomable; I wish I had a Russian expert to explain the finer points! Didn’t really understand it – were they all dead? Incoherent and v. difficult to follow Or more definitively: This was arrant nonsense – impenetrable and obtuse; what was it all about? But what did it mean? Very odd; bizarre and incomprehensible; bewildering and baffling; I didn’t understand the point! Mind numbing; pretentious rubbish; completely passed me by; too self indulgent; So much so that many of you struggled to stay awake: Way too long; fell asleep; travelogue for the Hermitage – ultimately tedious; I thought it would never end; like being trapped in a bad, oppressive, never ending dream; boring; very tedious; an endurance test; 90 minutes never went so slowly before; soporific; mesmerising – but too much so! But, to finish on some slightly different themes: A completely new and different experience – just what I come for! Good that GFS presents a diverse and challenging programme; good choice. Having just returned from a trip to St. Petersburg it was great to see the palace rooms populated with people in historic dress; now I want to visit the Hermitage. What a weirdo – Glad to have the screen between me and him! Inside Out – all the comments we received were positive: Loved the short; Very entertaining and could have been longer; a gem; delightful – great to see the very talented Mr McBurney (and the lovely Lena Headey of the captivating smile) Really enjoyable – very witty and loved the sound track; superb; a sweet little film – liked the music; Excellent; great – most amusing. John O’Keefe, October 5th 2011