Two poor farmers face losing their land over an unpaid bank loan. They seek help from a local politician, who scornfully suggests they commit suicide to benefit from a government programme. A media frenzy ignites when a journalist overhears them discussing this. Will one of them actually do it? 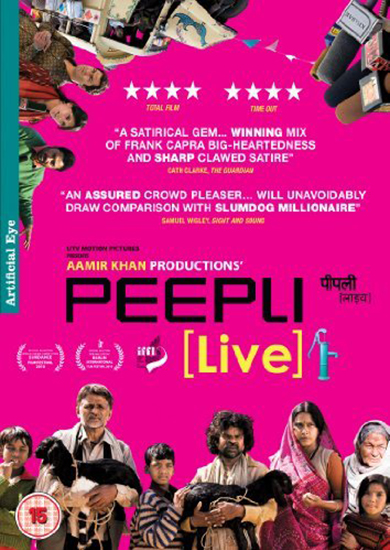 Armando Iannucci could not have done it better: a reporter with a sad face plastered on, interviews an elderly woman: 'Look at Indian motherhood, with a ravaged heart' he implores. The camera cuts to the cantankerous old dear puffing on a reefer. There is a deadly serious message about India's rural/urban divide in first-time director Anusha Rizvi's satirical gem but it also happens to have a juicily vulgar streak. 'Peepli Live' has been compared to 'Slumdog Millionaire'; here the little guy is bankrupt farmer, Natha. Natha decides to kill himself so that his family will qualify for a government scheme compensating families of farmers committing suicide. Rizvi is a former journalist and is savage on the sham compassion of the media and political elite. She closes on a scene of geuine poignancy, a construction site in the city, where dispossessed men like Nathan, are building luxury apartments, more ghosts than men. It is an image so bereft of feel-good, you'd have to describe 'Peepli Live' as the anti-Slumdog itself.
Cath Clarke, The Guardian - September 2010
It appears a scene straight out of 'Yes Minister'. The agricultural minister, a suave telegenic nonentity, is caught up in an embarrassing enormity – the story of a farmer threatening to commit suicide out of desperation and to claim benefits for his family. A civil servant explains 'Central government schemes don't cover farmers who are still alive. They only cover those who are dead'. Obscure Natha is a farmer under fatal debt. His village in fictional Mukhya Pradesh, is like thousands of others across India where life's cheap, time’s still and the air, inescapably dull. His brother and he have reasons to feel lucky. They're currently under national spotlight because the village falls under a constituency up for a by-election. The opposition would like Natha dead. The government in power would like him alive. The satire it irresistible, the sub-text compelling. The comic writing by director Anusha Rizvi is inspired. This makes the film then, one of the most intelligent and humorous Indian creations in a long time.
Mayank Shekhar, Hindustan Times - August 2010

What you thought about Peepli

There were many thoughtful and considered responses to Anusha Rizvi’s satirical and critical version of contemporary India and its mass media. The most enthusiastic members of the audience found it “faultless”, “very sharp, poignant and witty satire with a lovely eye for detail”, “brilliant film, such desperate poverty – excellent background music, most enjoyable”, “excellent all round”, “a moral tale – politicians and journalists are obviously pretty nasty in India too”. It was considered “a sad true story, lightened by humour”, and “excellent for entertainment but the film wandered between pathos and humour and wasn’t quite certain where to settle”. The tension between satiric insights, comic situation and “grim reality” was, in several responses, the central feature of the film, with “biting satire” and “multi-layered themes reflecting the complexities of Indian life and politics”, a picture of “desperately sad existences conveyed with powerful direction and excellent performances”. There were some uncertainties about how far comedy went – “couldn’t decide whether it was a tragedy or a black comedy”, “beautifully clear, evocative and realistic slice of rural India, but the corruption and cynicism of India media and politics was ultimately depressing in the way it mirrors our own”. While it was clear from all the responses that there had been substantial engagement with the film, there were some reservations and uncertainties: “a powerful indictment of the situation in modern India, but the plot was too simplistic and obvious”, “a very complex exposition of a relatively simple idea”, “a curious mix of serious and amusing – it was hard work”. Common to those responses which found some flaws in the film was that it was too long.