Robert Dupea has given up his promising career as a concert pianist and is now working in oil fields. He lives together with Rayette, who's a waitress in a diner. When Robert hears from his sister that his father isn't well, he drives up to Washington to see him, taking Rayette with him. There he gets confronted with his rich, cultured family that he had left behind. 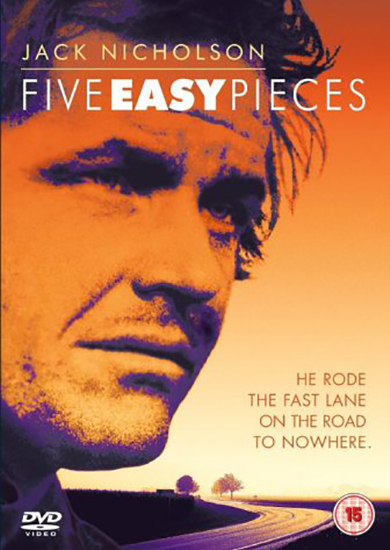 Now forty years old and looking better than ever, this first and best collaboration between Bob Rafelson and Jack Nicholson comes from a golden half-decade of American cinema (1970-1975). It features one of Nicholson's finest performances as the all-American malcontent, Bobby Dupea, who rejects both the over-cultivated artistic world into which he was born and the trailer-park culture into which he's escaped. The movie is a succession of dazzling scenes, including the classic confrontation between Bobby and the jobsworth waitress in the roadside diner, and his heartbreaking speech to his paralysed father on his brief return from hot, dusty southern California, to his chilly, fog-bound home in the Pacific Northwest. Perceptively scripted and skilfully photographed, it brings together Mozart, Chopin, Bach and country music to richly suggestive effect.
Philip French, The Observer - August 2010
Bob Rafelson's 'Five Easy Pieces' on its fortieth anniversary, shows how thoroughly American society was traumatised and disoriented during the Vietnam war. Jack Nicholson plays Bobby Dupea, a talented drop out from a musical family who leaves his job as an oil rigger and life away from working-class people in Southern California, to make an uneasy trip home to the Northwest. Nicholson's Bobby is restless and disgusted with himself. His anger is such that he can't resist telling acid truths, even though he's burning himself more than anyone else. There are some classic scenes and confrontations but overall, the movie has uneven moments. Rafelson shows powerful flair as the director and Karen Black convinces as Bobby's devoted waitress girlfriend, but the movie has more anger than it knows what to do with; that's its fascination and its weakness too.
David Denby, The New Yorker - March 2010

What you thought about Five Easy Pieces

Just as the audience for ‘Five easy Pieces’ was by far the largest so far this season, so the number of responses considerably exceeded the figure we have come to expect. Many thanks to all of you for letting us know what you think. Reactions were strongly positive for the majority with many tributes to Jack Nicholson’s ‘remarkable acting’ and ‘bravura performance’. The anger and intensity contained in the performance and portrayal of Bobby Dupea, the central, bitter malcontent of the film, created ‘truth and atmosphere’ of the times. They reminded one viewer of the ‘harsh social vision of John Osborne’; another felt that Nicholson’s ‘tour de force’ was the more impressive because it continued right into the closing sequence of the film. Several points were made about the subtlety of the film’s construction and its sense of a society falling apart, directionless and caught between extremes, with no middle ground. The power and impact of the musical score was commented on by many of you, giving the film a further emotional dimension. There was praise in many responses for the cinematography and the script, but there is no doubt that the key feature, for those who praised the film was Jack Nicholson’s ‘mesmeric’ and ‘compelling’ performance. For quite a number in the audience, however, a brilliant lead performance was not enough. The film was criticised for ‘a dated storyline’ and a ‘lack of clarity of purpose’. Another viewer found it ‘disjointed’ and wondered how long a character could keep running away without becoming boring. Another comment recognised Nicholson’s ‘fine acting’ but thought it could have served a better purpose that ‘unremitting angst’ and for another, the social conflict was dated and the ending predictable. There was criticism too, that the film went on too long, was ‘too much of a fantasy’ and was finally ‘a lot about very little’. One member dismissed the film as ‘the ultimate cliché – the sensitive man inside a brute’. In the responses too, there were 18 references to the Mike Leigh short – 15 registering enjoyment and 3 finding it mediocre.