What to do when the workers of a factory have been laid off overnight? Louise’s idea: why not pool the compensation money to hire a hit man and liquidate the boss? Unfortunately, she comes across Michel, who proves so inept that he sub-contracts the job to novices. It was hard to find the one who actually made the decision to outsource the factory’s activities. But Louise will not give up so easily. 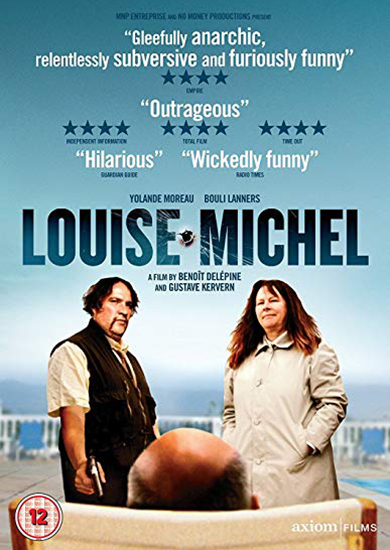 Bertolt Brecht, author of 'The Threepenny Opera', would have got some laughs out of Gustave de Kervern and Benoit Delepine's cheerfully political comedy. Recently released from prison, Louise (Yolande Moreau) is the type who puts the 'lump' in lumpenproletariat – a surly bedraggled figure of uncertain age, who wears a shapeless trench coat and refuses to consume any alcohol apart from lighter fluid. Louise doesn't exactly bond with the women who work alongside her at a toy factory in provincial France. But when the factory abruptly shuts its door, she's the only one with a practical suggestion. Why not hire a hitman and get revenge on the men who cost them their jobs? Louise makes contact with the oddly maternal Michel (Bouli Lanners), who, when offered the chance to earn $20,000 doesn't hesitate for long. But the challenge of killing anyone (or at least the right person) proves to be greater than expected. Like a modern day version of Don Quixote and Sancho Panza, this homicidal duo embark on a series of mostly disastrous adventures. With no explicit moral in tow, the directors mock bosses and revolutionaries with equal glee. They reserve most of their affection for simpletons, conspiracy theorists, transvestites, sociopaths, gun nuts – in short, anyone who falls between the cracks of the social order. Hang around past the credits for a sign that the quest for justice goes on.
Jake Wilson, The Age - October 2009
Gustave de Kervern and Benoit Delepine have created a black comedy with the courage of its bad-taste convictions, partly sending up big-hearted Anglo-Saxon films such as 'The Full Monty' and 'Calendar Girls'. When the female workers of a French provincial factory are laid-off, they wonder what to do with their pooled compensation money. A nude calendar idea is instantly discarded in favour of a proposal from a dishevelled Louise: she says they should hire a hitman to whack the boss, but the only hitman they can find is an incompetent called Michel, who couldn’t assassinate his way out of a paper bag. There are some nicely bizarre moments and some definite laughs.
Peter Bradshaw, The Guardian - March 2011

What you thought about Louise Michel

Not surprisingly, there was a considerable range of opinion about ‘Louise-Michel’, from the high praise of ‘excellent combination of realism and the absurd’, to the blunt ‘this gave a new meaning to bad taste’. Those who enjoyed this black political comedy found it ‘convincing and entertaining’, ‘dark but funny’, ‘a black farce of excruciating mirth’ and ‘a triumph of eccentricity’. It was perceived as an ‘impossible story kept going by strong acting which made it almost believable’ with other tributes to the ‘superb acting and cinematography’. Some of you were intrigued by the study and expectations of gender roles, by the striking ineptitudes of the ‘hit-man’, and welcomed the ‘pervasive ambiguities’ of the film. With ‘great gags and social commentary’ the film was for several of you ‘very funny, bizarre, crazy but brilliant’. There was an appreciation of ‘wonderfully surreal humour’, ‘the edgy handling of many important issues’ and ‘the clever, entertaining concept overall’ But there was another version. ‘Too long’, ‘too bizarre’, ‘bordering on poor taste’, ‘made me feel uncomfortable’, ‘too anarchic and surreal’, ‘the sadness of the slapstick did not mix’, constituted a shared critical vocabulary for those who had reservations about the film. Other comments deplored ‘the sickening violence’ and regretted that the ‘black comedy mixed with slapstick didn’t really work’. There were some stronger criticisms of the ‘cheap-point-scoring against inadequate people’, ‘very silly with poor jokes’, the feeling that the film was ‘pointless and sad and not funny’ and that in the end it was no more than ‘self-indulgent, appalling rubbish’.