Three weeks before general elections, the leader of one of the country’s largest parties is involved in a severe car accident. The political scene is thrown into disarray. Ulrik Torp is a young, ambitious journalist, who gets caught up in a ruthless struggle for power headed by the party’s two successors to leadership. Speculation and calculated lies fuel the controversy, and a cynical plot is uncovered that may involve the incumbent Prime Minister. 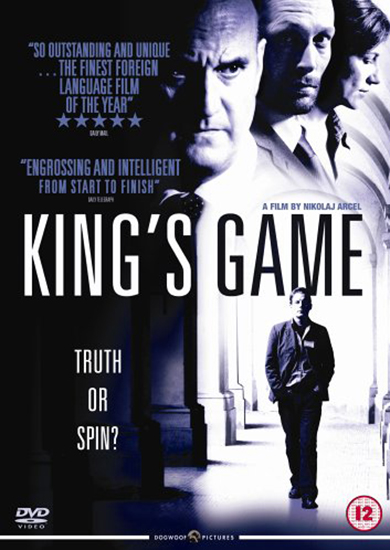 The Faustian pact between politicians and the media is laid bare in 'Kings Game' an immensely watchable Danish conspiracy thriller. A cub reporter (Anders W Bethelsen) is assigned to the parliamentary beat just before a general election, at a time when the man expected to lead a landslide victory is involved in a horrific accident. Manipulated by almost everyone around him, the idealist journalist gets a crash course in the dirty business of politics. Berthelsen brings an earthy goodness to the role of Torp, the journalist. A juicy scoop falls into his lap by way of a devious spin doctor and before he knows it, he has become an unwilling pawn in a sinister behind-the-scenes scrap for the party leadership. Something is rotten in the state of Denmark and it infects not just parliament but the supposedly free press. This is a quintessentially 21st century thriller, with an intriguing and convoluted plot and clever action-packed execution. Nikolaj Arcel's film is consistently gripping in its world of people in suits, scratching backs, rubbing elbows and greasing palms.
BBC Movie Review - September 2005
This is an intelligent, well-written and enjoyable political thriller which is both impressively acted and smartly directed. It was a huge success in Denmark, where it received eight Danish Academy awards, including Best Film and Best Director. It is set in contemporary Denmark, just weeks away from a general election. When the leader of the Centre Party is seriously injured in a car accident, a power struggle erupts between his most likely successors: conservative chairman Erik Dreier and his more liberal rival, Lone Kjeldsen. 'Kings Game' is adapted from a novel by a political insider and as such the script has an air of seasoned authenticity. It's extremely well shot. The director keeps things incredibly dark throughout, heightening the sense of paranoia and suspicion. The performances are excellent, particularly Berthelsen as Topr, the journalist, Soren Pilmark as Erik Dreier and Nicolas bro, who enlivens every scene he is in. In short, 'Kings Game' is an enjoyable, impressively directed thriller, with an intelligent script and strong performances – one of the best conspiracy theory movies.
Matthew Turner – View London Review - September 2005

What you thought about King's Game

It seems the Society got off to a cracking start with its 2011 season, going by your responses – with two exceptions, you all put this political thriller in either the “good” or “excellent” bracket, with the latter outnumbering the former almost twofold. “A great start to the season” was the general cry. Even those of you who spoke of the film being a bit slow at the beginning confirmed that they were hooked by the end. The majority were simply bowled along from the start by the “well-sustained threatening atmosphere” and “well paced plot” that “kept you guessing to the end” – “tight and taught, beginning, middle and end, very rare indeed”. The word “gripping” came up time and time again in your comments. Many of you noted the quality of the acting and the casting, helping to make the plot only too believable. One viewer claimed not to know whether they were watching a work of fiction or a documentary, so entirely true to life it all was. Several appreciated the cool Scandinavian treatment of the story-line - “understated and a refreshing slant on the usual British political films which follow a rather hackneyed and predictable course” according to one of you. “And not a car chase in sight!!” another exclaimed. There were several references to the “topicality” of the film, particularly in the context of the current screenings of “The Killing” on TV, featuring many of the same actors. Others saw links with Watergate or with the Rupert Murdoch “scandal”. All in all, the majority of you appeared to have thoroughly enjoyed this first screening in our new season.