Of Gods and Men

Under threat by fundamentalist terrorists, a group of Trappist monks stationed with an impoverished Algerian community must decide whether to leave or stay. 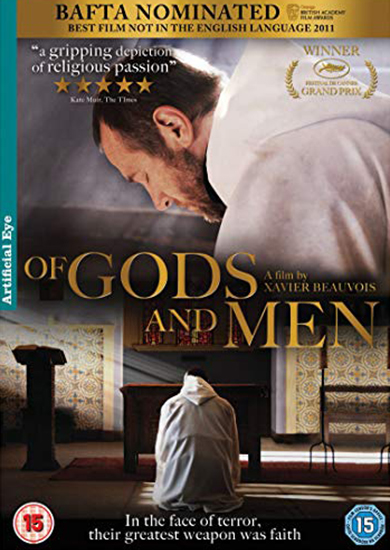 'Men never do evil so completely and cheerfully as when they do it from a religious conviction'. The speaker is Luc, an elderly Catholic monk, quoting a pensee of Pascal. He does it at a moment of crisis and ambiguity. Should the thought apply to future victims, secretly infatuated with the idea of a martyrdom that will fan the flames of violence for generations to come? This stunning and deeply moving film is based on the kidnapping and murder of monks in Algeria by fundamentalists in 1996. 'Of Gods and Men' is a modern tragedy that doesn't require its audience to share its belief anymore than something by Aeschylus. Lambert Wilson plays Christian, the head of a Cistercian monastery in Algeria, a Spartan order devoted to contemplation and prayer. Their community has developed a happy relationship with local Muslim villages. They have a quiet, supportive respect for each others' traditions. But dark forces are gathering: intolerant jihadist forces have already murdered Croatian construction workers and are rumoured to have Catholic monks in their sights. The monks must decide should they stay or should they go? Is going cowardice? Is staying arrogance? Is martyrdom their destiny?
Peter Bradshaw, The Guardian - December 2010
This is a grave and thoughtful film and its images and emotions are likely to stick with you for a long time. Xavier Beauvois' film is based on life in the Cistercian monastery, in the run-up to the kidnapping and murder of seven monks in 1996. The peace of the monks' existence seeps into the opening scenes, flowing from their full, unhurried days - praying, singing, doing agricultural work and making honey - and their warm relationships with the Muslim villages who are their close neighbours. But Islam fundamentalism is taking root in Algeria and apprehension circles the monastery for the first time. The Algerian government advises them to return to France, although local people are desperate for them to remain. At first the pressure fractures the harmony of the monastery as the leader argues for staying while certain others press to leave. Thereafter, there is a sense of an increasing embattled group of men, supporting each other with tenderness. These days it is unusual to see a screen depiction of faith so entirely devoid of fury – what remains with you is the gentle, sustaining power of the monks' belief.
Jenny McCartney, Daily telegraph - December 2010

What you thought about Of Gods and Men

Well over 80% of the audience graded ‘Of Gods and Men’ as either excellent or good, so there is clearly much to praise. You enjoyed the film’s “compelling narrative”, its “beautiful cinematography” and “the amazing acting”. Many engaged with the “long suspense” of events and the inevitability of the conclusion. One member of the audience found it “immensely moving and profound, revealing the true depths of religious faith”. There were many comments about the inspiration of the monks’ way of life and the “simple dignity” of their beliefs. One viewer complimented the director of the film, Xavier Beauvois, for bravery in tackling a “simple plot and an unfashionable subject matter” and making a “highly moving film in consequence”. The “moral and religious seriousness” of the film was valued by several of you in the context of a contemporary culture which is cynical and negative and despite the “pain and cruel inhumanity” of events, found strength and power in the film. The quality of the cinematography was noted in many responses, partly for its evocation of daily life and partly in the portrayal of the monks, whose eloquent faces, expressions and gestures were likened in one response, to paintings by Giotto. The tension between the “silent peacefulness and the eruptions into noise and violence” was a strong feature for many of you, creating the very moving quality of the story. The music and singing received many comments of praise, particularly in the “last supper” scene and the contribution the music made to the “sense of community between the monks and the villagers”. One viewer summed up the film as “a bleak and formal tragedy with painful and harrowing denouement” yet containing the warmth and hope of humanity. There were some reservations and dissenting voices. For those in this category, the film was too long and too slow and in a wider sense naïve, despite the pathos of events. Recognising the conflicts of faith, duty and conscience was promising material, for one viewer, but it was handled in too theatrical a way. In addition, there was a view that the characters of the monks were “static and undeveloped” which meant it was difficult to identify with them.