Daigo (a cellist) finds himself without a job. He answers a classified ad entitled “Departures”, thinking it is for a travel agency but it’s actually for a funeral professional to prepare the dead for burial. Daigo takes a certain pride in his work and the film follows his sometimes comical journey with death as he uncovers the joy and meaning of life and living. 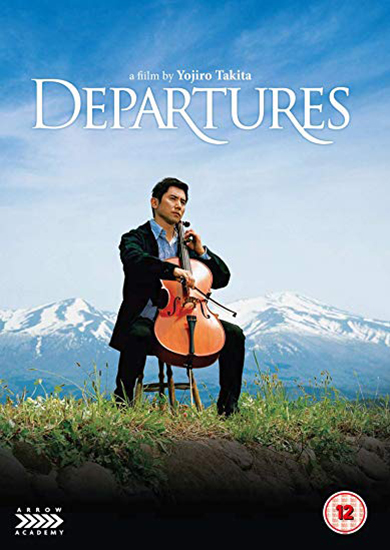 It's not surprising that from Sophocles 'Antigone' through gravediggers in 'Hamlet' to the Fisher family's Los Angeles undertaking business in TV's 'Six Feet Under', that funerary rites have fascinated dramatic writers. 'Departures', which won an Oscar for best Foreign Language film in 2009, is a moving, gently amusing contribution to this tradition and centres on Daigo. A 36 yr. old cellist, who returns to his home town, where he applies for a job at what he thinks is a travel agency. It turns out to be a small firm specialising in the journey 'to the world from which no traveller returns'. He's initiated into the subtle art of 'encoffinment'. At first, he cannot tell his young wife about his new profession, but eventually she comes to understand its importance. The film, mostly set in a wintry landscape surrounded by snow-capped mountains, is fastidiously and movingly composed.
Philip French, The Observer - December 2009
Yojiro Takita's bitter-sweet tale of the Japanese funereal trade plays a bit like a formal service itself. At the start there is some uncertain shuffling, a few inappropriate giggles, the odd spasm of embarrassment. Then the mood settles and the soberness of the ritual takes hold. Masahiro Motoki plays the down-on-his-luck cellist who accepts a job ministering to 'the departures', in his home town, tenderly washing and shaving the corpses on their last stop before the incinerator. This was a surprise winner of this year's foreign film Oscar, which prompted someone to joke that here at last, was a movie the decrepit Academy voters could relate to. Fortunately, Takita's wry insightful handling ensures that it speaks to the rest of us as well.
Xan Brooks, The Guardian - December 2009
Death informs life in this elegantly simple Japanese film about unemployed cellist (Masahiro Motoki) who takes a job in 'departures'. Winner of the 2009 Oscar for Best Foreign Language, 'Departures' whimsical take on the Japanese funeral industry proves surprisingly funny. Director Yojiro Takita delights in playing with the squeamish qualities of his subject, as the undertakers deal with deceased transvestites and shoot ill-conceived corporate videos. Yet it's also uplifting, as Daigo's journey of self-discovery is fired by his new found appreciation of the end that awaits us all.
Jamie Russell, Radio Times - 2010

What you thought about Departures

The Japanese film ‘Departures’ clearly went straight to the audience’s heart and emotions – “wonderful pace, wonderful acting and superb interaction of characters”. You were often very moved by the “reverence and tenderness” of the film, through the “taboo subject” of death that was approached in an “admirably tender and sensitive way”. For many in the audience, it was a “new insight” into another culture’s attitudes to death and several felt that it was greatly preferable to “the ugly and dark secrecy” which often accompanies ideas of death in our own society. The experience of “sensitivity without sentimentality” was common to many responses, as was the “close observation of character and relationships in a detailed social context”. Mixed with “gentle humour” the action was “moving and dignified” and contributed to the “exceptional respect for the dead” which the film created. There were several comments about the “empathy” of the film, its “living quality” and its “exquisite timing” and despite differences in culture and religion, the way it presented a “common humanity”. The film was, overall, “peaceful, refreshing and serene” and possessed a “great originality”. As a constituent part of this “unexpected gem of a film” was the quality of the accompanying music. There was a specific reference to “beautiful music” in fifteen responses. There were one or two reservations, however, in the overwhelming praise for the film. For some, it was moving but succumbed to sentimentality and the young wife was portrayed in too pleasing and conventional a manner. Overall, however, one comment will stand for what was the experience of the GFS audience: “An inspirational film, touching, reverent, affectionate and wise – a splendid evocation of the best of humanity”.