Cuba, 1948. Chico is a young piano player with big dreams. Rita is a beautiful singer with an extraordinary voice. Music and romantic desire unites them, but their journey - in the tradition of the Latin ballad, the bolero - brings heartache and torment. From Havana to New York, Paris, Hollywood and Las Vegas, two passionate individuals battle impossible odds to unite in music and love. 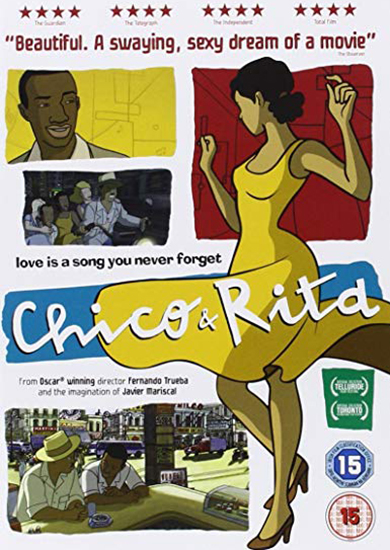 Sunny and sweet-natured, this lovely animation by film-maker Fernando Trueba and artist and designer Javier Mariscal, is a 1940s love story with all the brassy passion of a Barry Manilow number, set in the nightclubs of Havana and New York. Rita, voiced by Limara Meneses, is a beautiful Cuban singer who has to scrape a living; Chico (Eman Xor Ona) is a talented, underemployed pianist, thunderstruck with love for Rita when she meanders on stage for a solo. Their passionate affair and professional partnership is endangered when a smooth-talking Yankee impresario tells Rita he can take her to showbiz glory in New York, but has no interest in lover-boy Chico coming along as well. There is a wonderful set piece when Chico offers to fill in one night for an absent musician in the Woody Herman Orchestra, breezily confident he can busk his way through any jazz number – only to discover he is expected to sight-read the piano part in Stravinsky’s Ebony Concerto. The great names of both Cuban and American jazz are involved and Chico and Rita's tragicomic love story meshes very pleasingly with this musical backdrop.
Peter Bradshaw – The Guardian, November 2010
Chico and Rita, an animated film from Oscar winner Fernando Trueba, is set in the late 1940s. Cuban piano player Chico (Eman Xor Ona) meets an astounding singer in Rita (Limara Meneses) and the film focuses on the romance that develops between the two. Chico and Rita is a musical film, light on dialogue, but with wonderful music. Idania Valdes, who sings Rita's songs is a beautiful singer, with accompaniments bringing the animation and characters to life with some lively jazz b-bop and piano music. Musical heroes, including Dizzy Gillespie and Charlie Parker appear in the story and whilst it is not a biography, the film is dedicated to Cuban musician Bebo Valdes and tries to capture the Cuban spirit of musicians of his era. The script is often hilarious and the love story will capture the hearts of any true romantics in the audience. The film's animation is mesmerising, detailed and layered to provide us with a colourful and warming image of Havana. With a plot that touches on issues of segregation and the Cuban revolution, this vibrant film and sweet story makes it a thoroughly enjoyable watch recommended for all.
Emma Green – The Film Pilgrim, November 2010

What you thought about Chico and Rita

The majority of you, by far, felt that the film was very well done and highly enjoyable. Words like ‘brilliant’, ‘charming’, ‘unusual’, ‘lovely’, ‘heart warming’, ‘delicious’ littered your comments. Many found the story ‘touching and engaging’, ‘cool and sexy’, ‘very romantic’. You were also drawn to the way in which the film depicted the era and its culture. ‘Lovely evocation of an era; very characteristic of the time, place and culture; great attention to detail; a glimpse into a classic era’ The quality of the animation drew many comments – again almost entirely positive. ‘Technically very clever; excellent animation; very cool, cold colours; not the prettiest of faces but they got all the emotions right; great colours; very easy on the eye; beautiful to look at; characters well drawn in both senses. For some the quality was such that they almost lost sight of the fact that the film was an artificial creation. ‘Hardly noticed it was a cartoon; unusually realistic; I forgot it was an animation; you could almost believe the characters were real.’ And yet there was only one comment concerning a particular characteristic of the film:’ First time to see nudity in an animation – very novel’ The major triumph of Chico and Rita was, of course, the music which received almost total praise. ‘Lovely music; tense music; great music; excellent music; entrancing music; I’d have come along for the soundtrack alone! The star was the music; not a jazz fan but found the music relaxing and enjoyable However, not everybody was so effusive in their praise. ’Too long; predictable; corny; shallow story; too sentimental; subtitles difficult to read (white on white); characters were ‘wooden’; no real depth; very slow moving, tedious story; animation was too crude to be enjoyable.’ Je t’aime John Wayne The short did not attract many comments but those few were quite polarised. Those for: ‘Loved the short; enjoyed the short; short better than the main film; unusual; good but not my sort of cowboy!’ Those against: ‘Very odd; very poor; it was pointless; didn’t get it.’ Final comment from five of you: ‘Good programme - good choices.’ John O’Keefe, 28 Sept 2011