A small-time rancher agrees to help escort a captured outlaw to the 3.10 train from Contention to go to court in Yuma for the reward of $200. A battle of wills ensues as the outlaw tries to psych out the rancher on the hazardous journey. 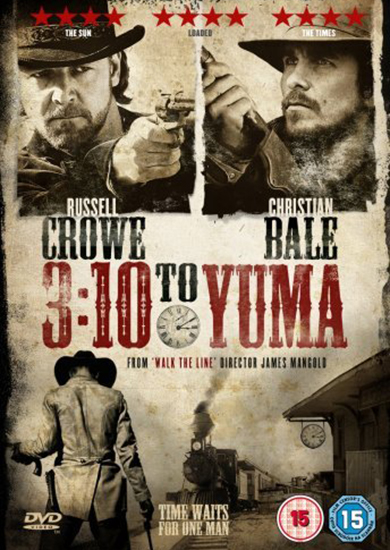 This is a thoroughly enjoyable old-school western and more films like this would be no bad thing. It's a thrill-filled ride across a fly-blown dust bowl where the heroes are iconic, unwashed and deadly. They spit out killer lines like bullets. Rather than an updated or revisionist take on the genre, Mangold's film is respectfully traditional. It owes something to the contemporary action movie but the themes are age old: redemption, morality and the lure of the lawless wilderness and of the killers who call it home. The film follows a battle of wills between two men from either side of the law. Russell Crowe plays Ben Wade, boss of a gang of reprobates so dissolute that even he describes them as animals. Christian Bale plays Dan Evans, an impoverished rancher, who signs up to help guard the captured Wade and to escort him to Yuma where he will stand trial. Crowe's Wade is a deadly charmer, with a wit as quick as a rattlesnake. Bale's Evans is a taciturn tough guy who has taken the job to earn back the respect of his sons and the love of his wife. Special mention must go to Ben Foster as Wade's right-hand man – with his whiplash of a temper and grime-coated leer, it's a scene-stealing turn in a film full of top-notch performances.
The Times - September 2007
There's an affectionate charm about a good old fashioned western and this remake of the 1957 version reinforces this image. Based on an Elmore Leonard short story, the film has simplicity, brevity and a powerful degree of realism and authenticity. In its favour are strong, very different performances from its two stars. Christian Bale is establishing himself as one of the most versatile actors around. He takes an understated approach, by contrast with Russell Crowe, who gives the portrayal of the engaging and ruthless outlaw, Ben Wade, a powerful and arrogant presence. When Wade is captured, the railway company pay a reward to anyone desperate enough to escort Wade to the nearest town and put him on the 3:10 to Yuma. Dan Evans (Christian Bale) is more than desperate. With a wife and two young boys to support, he owes a local racketeer money and is in danger of losing his farm. The psychological and moral battle waged between Wade and Evans gives 3.10 to Yuma potentially absorbing depth.
Kevin Murphy, TalkTalk - 2007

What you thought about 3.10 to Yuma

Given that the Western is such a traditional genre, with its own conventions of narrative, action and character, then a modern remake of a 1950’s classic would be bound to lead to debate. The verdict overall, from the majority of responses, was that director James Mangold and the lead actors Russell Crowe and Christian Bale, had made a spirited and compelling version of ‘3.10 to Yuma’. Comments indicate that you found it “full of suspense, tense, edge of the seat stuff”, “brilliant, necessary violence and great acting”, “a classic story, skilfully updated in cinematography and acting”, “a cracking western with great performances”, “thunderingly good, with a wonderful sound track”, “classic dilemmas, classic characters, in a sharply re-defined style”. One response admired very much the “excellent rapport between the two leads, and the performance of the young boy” and as “a non-Western fan” found it greatly enjoyable. Another viewer felt it “great to see a fast-moving Western again, despite difficulties in sorting out goodies and baddies at times” and a further comment responded to the fact that the film was “entertaining, not too deep and had plenty of poetic licence in it” However, there were a lot of dissenting voices: “silly but quite good of a not very attractive genre”, “well acted, but so much shooting and violence to the point of parody”, “boring, unrealistic, couldn’t follow the plot”, “far too long and contrived”. One response found it “visually stunning, but with every cliché in the book” and another questioned whether it was possible “to remain so grim and serious for days on end”. “The wall-to-wall violence and noise” was coercive for one viewer, admittedly not a fan of Westerns anyway. Another criticised it for being “clichéd and unbelievable”. A common point, raised by many of you, those who found great quality in the film and those who were critical of it, was the very poor quality of the sound, particularly the instances of semi-mumbled dialogue and the lack of clarity which made understanding difficult at several key dramatic moments of the film.