While working as a clerk in a department store, a country boy seeking success talks the manager into offering $1000 to anyone who can bring more customers to the store. He then arranges for a friend, a "human fly", to climb the face of the store building as a publicity stunt. Unfortunately the "human fly" is a wanted man, and when "The Law" shows, our hero must make the climb himself, encountering new difficulties at each ledge, climaxing in the famous 'clock scene’. 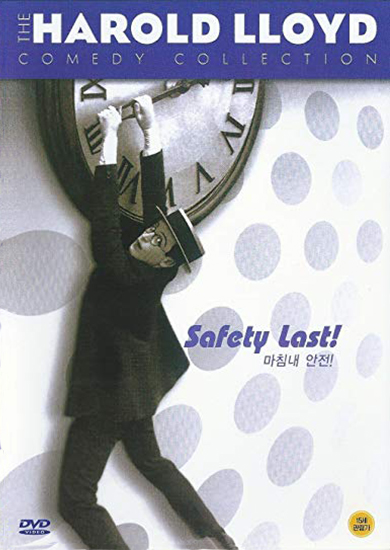 Safety Last' earned Harold Lloyd, the bookish, horn-rimmed glasses, straw-hat wearing comedian and Everyman hero, his nickname 'The King of Daredevil Comedy'. This successful film is most remembered for its thrilling hair-raising climax – a reckless, humorous stunt on the side of a twelve-storey skyscraper above busy city streets. The naïve Boy (Harold Lloyd) travels to the big city from a small town, promising to send for his Girl (Mildred Davis) after he has 'made good' with fame and fortune. He becomes a low-paid salesman in the De Vore department store, but makes it appear through his letters home and expensive gifts that he is becoming prosperous. The Girl ventures to the city to be with him and wanting to be a success, he plans to earn $1000 in a publicity stunt, with his roommate friend, the Pal (Bill Strother, with a real human fly act), to be a human fly on the outside of the multi-storey building. Unfortunately as things turn out, the Boy has to make the climb as his pal must elude a pursuing cop. In a remarkable daredevil set of sequences, the Boy inches his way up to the top of the building, encountering absurdly new difficulties at every new floor.
Tim Dirks, The Greatest and the Best in Cinematic History - October 2009


What you thought about Safety Last

you perceived differences between the two and gave grades for each film, ‘Safety Last’ was considered excellent in 6 cases and good in two. Conversely, ‘The Illusionist’ was thought excellent in two cases and good in six. Many of you thought that both films were ‘classic gems’, with a superb mix of music and animation in ‘The Illusionist’. There was general admiration for the intelligence in both films, an appreciation of ‘wry humour’ and ‘subtle atmosphere’ as well as ‘daredevil escapades’ in ‘Safety Last’ and the tension they created. Some comments drew attention to ‘the sense of innocence’ in both films, with special references to the remarkable art work of ‘The Illusionist’. Both films clearly entertained, with a light but thoughtful touch, showing insight into social pressures (success in ‘Safety Last’, a world changing in ‘The Illusionist’). ‘Inventive’ and ‘magical’ were adjectives commonly used about both films. ‘The Illusionist’ had a wistfulness and pathos’ but was set in ‘extraordinary naturalistic detail’, particularly of Edinburgh, and was overall a ‘lovely meditation on a period of light entertainment history in passing’. There wasn’t much criticism; two or three responses found ‘Safety Last’ too long and predictable and about the same number found ‘The Illusionist’ attractive on the eye but slow and not going anywhere.