Monsieur Hulot's brother-in-law is the manager of a plastics factory. His nephew grows up in a house where everything is fully automated and the boy is raised in a similar fashion. To take away the uncle’s influence on his son, his brother-in-law gets Hulot a job in his factory. 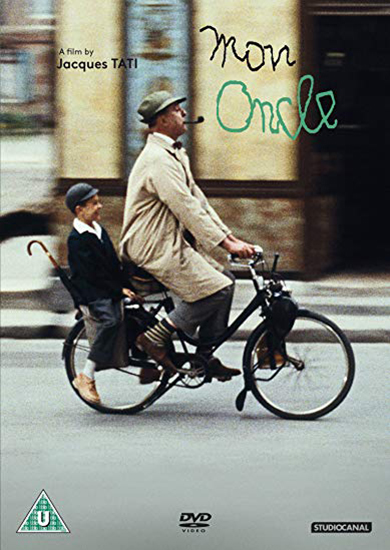 In 'Mon Oncle', Paris is pitched between the architectural remnants of its florid, romantic Belle Epoque architecture, kiosks and all and a new sterile modernity where functionality trumps beauty. The film opens on a pack of stray dogs, overwhelmingly adorable, eating thrown-away food out of garbage bins. They follow a horse-drawn carriage out of a postcard – charming neighbourhood of flower vendors and fishmongers and in three shots find themselves in the new modern Paris. That pivotal image establishes Tati's pessimistic viewpoint. For much of the film we see his alter ego M. Hulot and share his puzzlement over functional architecture and ludicrous gadgetry that have taken over his world. There's an inherent conservatism in Tati's vision, a sense that the key to good living is to be found in the past. Unlike Chaplin in 'Modern Times', Tati doesn't attach his critique of modernity to a political point of view. For him, it's merely a fear of change in the present and nostalgia for the past. When 'Mon Oncle' ends, it's on the depressing note of Hulot's quaint neighbourhood being torn down to make way for a sterile apartment block and Hulot himself exiled from the city. Hulot's ineptitude finds its perfect expression when he, now an exile, is being driven out of the city by his brother-in-law in his horrid new green and purple car. Hulot tries to light his pipe with the car's cigarette lighter and tosses the lighter out of the window towards the city that has left him behind.
Christian Blauvelt – Slant Magazine - September 2010
France's incomparable Jacques Tati is having a barrel of fun making sport of mechanised living in this new film. Casting himself as M. Hulot, the bouncy bachelor whose brainless joie de vivre entangled him in numerous mad adventures in previous films. M. Tati is now losing his blithe spirit in a modern mechanised home and a mechanically antiseptic factory devoted to turning out plastic hose. There is plenty to confront the serene vivacity of the breezy M. Hulot in the mechanised world of fireless cookers and electric eyes that open doors. In particular there are the adults, whose lives seem patterned to all this gadgetry and a nephew, aged 10, whose tastes and interests are more attuned to Uncle Hulot's relaxed world. Tati gets his most genuine humour, however, out of the old house in which Hulot lives, out of his neighbours, the market-stall keepers, the street sweeper and the local dogs. It is in the company of people like these that Hulot exudes supreme good nature and not just bewilderment and alarm.
New York Times - November 1958

What you thought about Mon Oncle

There was one comment with no grade. Jacques Tati’s ‘Mon Oncle’ was a great pleasure for the majority of those who responded. The words ’delight’ and ‘delightful’ occurred many times, along with ‘brilliantly funny’, ‘inventive’, ‘great fun’, ‘wonderful’, ‘entertaining’ and ‘perfect’. There was a running theme of ‘charming’ and it’s French ‘charmant’ in the comments, as well as a sense of the ‘refreshing’ quality of the subtleties of action and character. There was praise for the quality of the performances throughout, not just the lead role, and for the running jokes, which re-occurred with great directional subtlety. The ‘dog choreography’ was much enjoyed, along with the music, sudden surprising visual impact of movement and action, and the performance and impact of the gang of children. Several responses drew comparisons with the masterpieces of silent film and for at least two in the audience, there was a strong view that ‘Mon Oncle’ was itself a ‘masterpiece’. Comments reflected some insights beyond the immediate humour, seeing a strong satirical edge about the modern world and its bizarre technology. Some felt that despite itself, the film was an eloquent elegy for a world in the process of disappearing and that ‘only the French can combine buffoonery and seriousness so well’. Several in the audience felt there was a great pleasure in seeing the film again, after an interval of many years, and finding that it retained its energy, humour and impact. One response summarises the feelings of all those who enjoyed the film ‘superb, brilliant, very cheering. Quite the funniest evening for a long time’. There were a small number of responses which found shortcomings. For several it was only ‘mildly amusing’ and ‘too long’. One view was that the film was ‘slight – a period piece that for me hasn’t lasted’. For another, it was ‘completely irritating’ and in one forthright response ‘what a load of twaddle – reminds me of why I much prefer Italy to France’.