In a provincial town, a single mother, who runs a herbal store and practises as an unlicensed acupuncturist, is deeply attached to her simple-minded son, a 27-year-old with a mental age of six or seven, who suffers from bouts of amnesia and keeps bad company. Arrested for the murder of a high school girl, he's railroaded into a confession by inexperienced detectives. But the mother is convinced of his innocence, and in the face of indifference from officials and a hostile local populace, she turns detective. 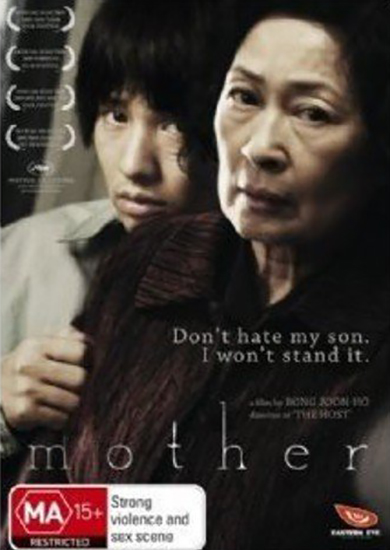 Bong Joon-ho's 'Mother' is a suspense thriller, a gripping psychological study and a great showcase for 59 year old South Korean star Hye-ja Kim. She is excellent as a middle-aged single woman, eking out a living as a herbalist and unlicensed acupuncturist. She is quiet, withdrawn but with a steely determination to survive, which she deploys not for herself, but on behalf of her 20-something son Do-Joon, who has learning difficulties. He is gentle, childlike but moody and has been bullied all his life. Bong's film exerts an awful fascination as we see Do-Joon following a pretty frightened schoolgirl home down a dark alley. Without explanantion, the director cuts to Do-Joon's arrival home later in a confused state. Later, the police arrive and the Mother fanatically devotes herself to the greatest challenge any mother can face: she must get her son off a murder charge and also turn detective, finding the real culprit. Soon this formidable woman is making discoveries and seriously embarrassing the police in the process. Perhaps the best moment in the film is the deeply strange semi-stylised 'dancing' tableau at the very beginning of the film, which is to find its resonance later on. It is exotic, bizarre and challenging and this element of mystery takes the film above and beyond the normal thriller.
Peter Bradshaw, The Guardian - August 2010
It often feels that Asian directors have more opportunity to move around and experiment with genres than their Western counterparts. Korean director Bong Joon-ho shatters expectations entirely with his latest film, his best work so far. 'Mother' is a murder mystery, a melodrama, a black comedy, a heartbreaking tragedy, a keen social satire and much more. A fierce matriarch, devoted to her mentally challenged son, finds her world falls apart when he is arrested for the sexually motivated murder of a teenage girl. Her quest to prove his innocence forces her to take up arms against an all-male establishment , the dead girl's enraged family and her son's crafty and duplicitous best friend, an amoral layabout who provides some of the film's most memorably shocking moments. Bong juggles style with insouciant skill, infusing his classic noir plotline, with a brooding and blackly comic sense of a world spiralling out of balance. Kim's performance captures perfectly the sense of a woman at odds with a society she can't, or doesn't want, to understand. Bold, unpredictable and quietly devastating, 'Mother' is a masterpiece.
Tom Huddleston, Time Out - August 2010

What you thought about Mother

Mother’, the first film from a resurgent South Korean film industry shown by the society, was well received and appreciated – ‘brilliant, great story acting and direction’, in the words of one response. It was perceived by several of you as ‘subtle, sad and surprising’, ‘strange and intriguing’, ‘full of suspense’, ‘absorbing and unpredictable’. There was a welcome for the ‘unknown territory’ of this ‘gripping and unusual film’, albeit with some reservation about the brutality in some scenes. The tension in the film arose for several of you from the nature of the mother’s ‘obsession’ with her son and her quest for justice, with the ‘wonderful twists’ of the narrative underlining what was described as ‘a sense of unease, uncertainty and ambiguity’. One response particularly valued the ending, where parents were on a self-congratulatory outing, while the inner processes of the mother’s mind were revealed. There was a fulsome appreciation of the ‘superb acting’ of Hye-ja-Kim as the mother in many responses, and of the way the subtle acting and direction depicted the co-dependency of the mother and her son as the heart of the film. There were some reservations. Several responses recognised the quality of the film but found it too long, with a diminished tension in the middle section. There were difficulties with the ending too, which some found contrived and confusing, leaving too many unanswered questions about previous events. A number of responses could see the film’s achievements in acting and direction but found it too ‘strange, grim and depressing’ for real enjoyment.