Five paraplegics and a young able-bodied teenager light up the stage in front of an entranced audience of 8000 people. "Benda Bilili" is the name of this Kinshasa band which has acquired a 1 0 J A N 2 0 1 2 + SH O R T global following. Chances of success were slim at first. "Benda Bilili" is not a music film, it's the story of a dream that became reality 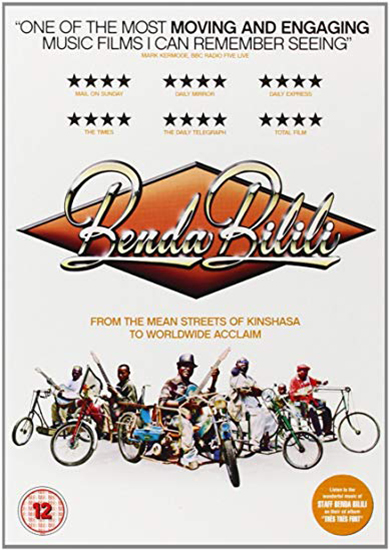 Benda Bilili (which apparently means 'beyond appearances') is the name of a band made up largely of paraplegics from the rutted, alternatively muddy and dusty streets of run-down Kinshasa, capital of the corrupt Democratic Republic of Congo, with percussion provided by street-wise urchins. This heart-warming, rough-and-ready Franco/Belgian documentary made between 2004 and 2009 records their heroic struggles to support their families through music, reflecting the hopes and sadness of their everyday lives. The film concludes with a European tour and the impressive album 'Tres Tres Fort'. We see and hear their music getting steadily more confident over the years.
Philip French, The Observer - March 2011
This is a cheerful and entertaining documentary about the meteoric success of African slum band 'Staff Benda Bilili'. They are a group of Congolese buskers who gather beneath the acacia trees in Kinshasa zoo, where they dream of stardom and a mattress to call their own. This amiable film shows how they get there, trailing a ramshackle alliance of middle-aged paraplegics and street kids as they wend their way from African slum to European concert hall. It's a long and winding road but the music at the heart is an exuberant blend of blues and African rumba. It is the sound of the discarded, picked up, brushed down and made precious again.
Xan Brooks, The Guardian - March 2011
This is a heart-warming documentary that tells an inspirational story. The filmmakers focus on two band members in particular: founding member Ricky (who everyone calls 'Papa'), who looks after everybody and seems to be a sort of Godfather figure; and able-bodied Roger Landu, who joins the band at the age of 12 and becomes a musical star thanks to his extraordinary abilities with a homemade instrument made from a tin can, a piece of wood and some string. The music is terrific, whether it's impromptu jamming sessions filmed on the fly in the streets or their later concert sequences. This film may well have you scouring music shops for their album afterwards.
Matthew Turner, View London - October 2010

What you thought about Benda Bilili

The applause for ‘Benda Bilili’ at the end of the screening was well matched by the plaudits in the audience comments. It was described as ‘exhilarating’, ‘inspiring’, ‘moving’, ‘uplifting’ and a ‘rip-roaring success of a film’. Many of you were impressed and humbled by the ‘fortitude’, ‘perseverance’ and ‘determination’ of the band and how from every kind of disadvantage they had made a future for themselves. ‘Such hope and optimism’ together with ‘riveting music’ was ‘simply superb’. The ‘heart-warming joie de vivre’ and the ‘acceptance of reality’ were, for several of you, key features of a ‘moving and inspiring’ film. There was praise too for the skill and artistic judgement of those who filmed and edited the documentary – ‘fascinating, wonderfully filmed, never patronising, containing elements of humour and showing natural musical genius’. The film showed the hardships of ‘cardboard city’, severe disabilities and the ability to make ‘joyous music’ while illuminating ‘the incredible strength of the human spirit’, through ‘remarkable stoicism and belief against all the odds’. A persistent question in many responses was ‘what happened next’ and ‘what has happened since’ which showed how this ‘moving and beautiful film’ had gripped the audience and involved many in ‘the amazing world of these innocent dreamers’ ? There was barely a dissenting voice amidst the praise: one or two responses suggested that it was rather long and needed some sharper editing, with some flagging interest in the middle sections. ‘The Gruffalo’ There were, in all, twenty-five comments about ‘The Gruffalo’, all of which found it ‘delightful’, ‘charming’, ‘clever’, ‘witty’ and ‘highly enjoyable’.