Intensely touching story of a misunderstood youth who, left without attention, delves into a life of petty crime. Arguably Francois Truffaut’s finest, with one of the most memorable endings in film. 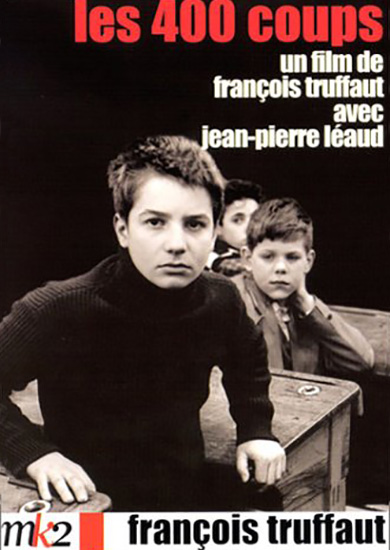 What you thought about The 400 Blows

In my introduction to the film I mentioned that the critic, James Berardinelli had written that the title, “Les quatre cent coups” is literally translated as The 400 Blows; however, since it's an idiom, a direct translation is imperfect. The phrase loosely means "Raising Hell", and, while that's not an English interpretation, it's a reasonable approximation”. One observer commented that in their opinion, “It was the 400 blows – although the parents never physically beat him! So harrowing to watch the erosion of hope and the weary resignation of his tender years. His friend’s loyalty was heartening….I hope he found what he was searching for”. Many of you were equally emotionally invested in the story which reflected a “sad portrayal of the power adults (negative in this case) have over children without them even realising” and “a rather shocking depiction of a normal little boy descending into turmoil and oblivion” which was “bleak but powerful storytelling”. Others agreed telling us that it was “a moving film showing the vulnerability of unloved children”. Many of you were taken with the portrayal of late 50’s Paris with several people commenting on this “fascinating vignette of post war Parisian family life…where people were “trying to make the best of things with few means….seeing the lack of proper discipline letting the teens slip through towards crime” and one commented on the emotional impact of “Paris seen through the bars of the prison van and Antoine’s tears when he realises his freedom had been taken away”. Others just “loved seeing the old cars of 1959.” There were many positive comments about the acting and Truffaut. Typical were; “hopefully we will be able to see the other films with Jean-Pierre Léaud” who played Antoine and “there must be a sequel?” In the review by James Berardinelli on the website he tells us that “The 400 Blows is the first of five times Truffaut brings us a chapter in the life of his cinematic alter-ego, Antoine Doinel (Jean-Pierre Léaud). Doinel (recurrently played by Léaud) would return four more times: in the 1962 short film "Antoine and Collette", then in the features Stolen Kisses (in 1968), Bed and Board (in 1970), and Love on the Run (1979). Love on the Run seems to close the Doinel cycle, but, because Truffaut died in 1984, there's no way to tell whether he might have again returned to this character”. … A member asked “is the end of “Quadrophenia”, a reference to the end here?” The answer is yes. In the Criterion Collection reviews, Frank Roddam, the director, says “Truffaut reportedly said his film was to be judged on its sincerity rather than its technical merit. The film is beautifully made, but Truffaut’s sincerity confirmed my path as a filmmaker. The 400 Blows strongly influenced my films Mini and Quadrophenia.” A few last observations which caught my attention were “a superb study of innocence destroyed by indifference and cruelty at all turns. Stunning camera work which opened up a new chapter in emotional narrative within cinema” and “I was looking forward to this as I’d seen it once before, many years ago, and found it disappointing despite being a big fan of Truffaut’s other work. I loved it this time.” Many thanks to you all for taking the time to complete the opinion slips. I am sorry if I have not included your particular observation but as you can see we are limited for space here.