A successful businessman discovers that his son was switched at birth; the other father is a loafer who is adored by his children. Does he chose his true son, or the one he raised as his own? 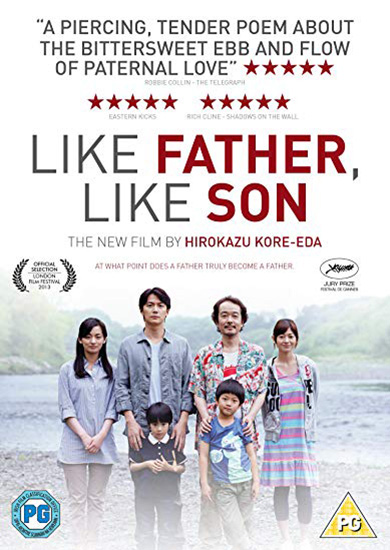 Hirokasu Koreeda's previous feature, "I Wish", was a jewel of a film; a tale of two young brothers torn apart by their parents' separation… and returns to the subject of parents and children in this beautiful, melancholic paean to paternity, which sifts through issues of nature and nurture as gently as a hand passing through drifting sand. The story is an old one – two babies, accidentally swapped at birth, raised by families of differing social status, now faced with the heart-breaking prospect of having to exchange their six-year-olds in whom each family has invested so much energy, ambition and love. Masaharu Fukuyama is the affluent workaholic … masks more complex inner turmoil; his aversion to the ramshackle family in which his biological son has been raised inevitably gives way to a realisation that he has been an absent father and husband – repeating the patterns of previous generations. As before, Koreeda's facility for casting and directing young performers is spine-tingling; watching these children as they watch their parents is utterly mesmerising, reminiscent of the finest work of the Dardenne brothers; unobtrusive, intuitive, instinctive. Equally impressive is the refusal to reduce any of the adults to stereotypes – while a clichéd contrast between wealth and austerity beckons, Koreeda invests his characters with believable flaws and strengths, regardless of class and situation. Even the nominal "villain" of the piece (the nurse responsible for the switch) is given a sympathetic hearing – a lost soul with her own parental issues. The result is a deceptively rich and rewarding drama, small of gesture, huge of heart.
Mark Kermode - Observer - 20th October 2013
Family ties wind through the work of the Japanese director Hirokazu Koreeda, whose films include "Nobody Knows" (about four children abandoned by their mother) and "Still Walking" (about a family grieving for a dead son). In his last film, "I Wish", he tells the story of two seemingly unsinkable young brothers separated by their mother and father’s bad marriage and choices: Each child lives with a different parent, having been divided up as if they were household possessions. In “Like Father, Like Son”, Mr. Koreeda again creates a pair of irresistible charmers whose lives are, with increasing emotional violence, upended — with polite bows, civilized conversations and hollow-sounding rationalizations — by the very adults meant to take care of them. Mr. Koreeda never overly explains his stories through the dialogue, preferring to tease out their meaning visually… Mr. Koreeda’s leisurely pace can sometimes feel overly deliberate. Once the pieces are in place, though, and he begins shifting your attention elsewhere — say, to a child secretly listening to his parents arguing — these differences recede, which is precisely to the story’s greater meaning. For all their obvious differences, the children and adults fit together simply because they love one another.
Manohla Dargis - The New York Times - 16th Jan 2014

Almost 80% of you very kindly took the time after the screening give the film a score even if you had not formulated a comment. This is extremely helpful to the committee. Thanks very much. Please keep it up. The majority of respondents felt that the film had “great performances; use of light and dark; a soundtrack that complements rather than fights or dictates”; with “the director having a willingness to pause and allow us time to look and reflect” thus delivering “a very sensitive and beautiful film”. However “The difficulty with indescribably sad stories is finding an ending”; with the “nurture/nature debate at the heart of the film very thought provoking”. Others agreed that “such a heartrending, poignant interpretation of an impossibly complex situation” proved “totally absorbing”. And that the film “really showed the complexities of parenthood and what a child needs “with “the children showing the right solution”. Many of you felt that is was “gripping, and realistic” with “superb and entirely credible acting, making an unreal and horrific situation into a story of redemption and rebirth...” The central theme resonated and moved many of you eliciting such observations as “it certainly makes you wonder how good a job you’ve done as a parent” and “after that there’s an extra big hug for the boys when I get home”. Several of you are obviously great fans of Japanese cinema. One member commented, “Everything I love about this type of Japanese film” with two others knowledgeable about Koreeda’s earlier works commenting “ I enjoyed it much more than “Wish”;” while another told us that “ having found “Still Walking” unbearable, uneventful and boring I sat downstairs at the end of the row so I could leave early. No need. Utterly entrancing and beautiful.” But “one of those films that seem to go on too long ….but then gently gets better and better” reflected the view of several members. For a couple of you however the film was “too long” with “an obvious plot line, conveyed inexorably to a slow conclusion” and “predictable, sentimental and boring”. In terms of the screening itself several people commented on the fact that it was “difficult to read the subtitles; with “subtitles hard to read at times”; “what is the point of subtitles; the majority of which I could not read” and “sadly I could only read the subtitles when they were against a dark background- which was surprisingly rarely”. Your points will be raised to the distributor.