Man with a Movie Camera

An extraordinary Russian documentary from 1929 that explores the art of film and film makers. It shows a man traveling around a city with a camera slung over his shoulder, documenting urban life and the result is a film with dazzling invention. 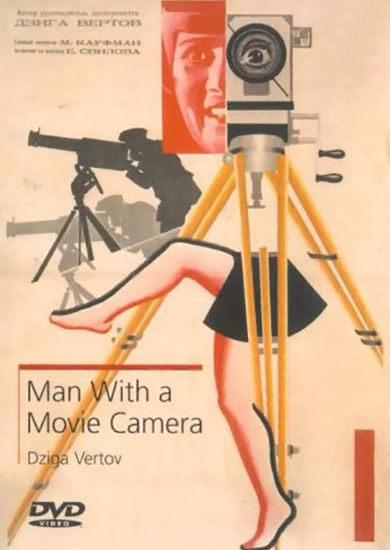 What you thought about Man with a Movie Camera

110 of you came along to the screening of the “Man with a Movie Camera”. 108 stayed to the end of the programme. 68% of you completed the comment slip. Thank you. The summary of the results of your observations shown above indicate that 40 % rated the film average and below. That is not to say that those 60% who scored it in the other categories poured universal praise; they certainly did not. However on many of the comments forms there WAS universal praise for the NFTS short film “How I Didn't Become a Piano Player”. “Brilliant short”. “The short was fun and well done”. “Short excellent”. “The short was brilliant-the best that GFs has ever shown”. “More of these if they are amusing and not introspective”. “Short excellent- loved it”. “The first film hit the right notes!” “The short could have been longer and the long film could have been shorter” are a few of the observations that I have picked out. Now we come to your points of view about our Russian film which some said was an “extraordinary and an excellent portrayal of 1929 soviet Russia” with “a fascinating if uncritical celebration of Russian city life as it embraced modernity” and “a remarkable tour de force…. real originality and substance in the images of a society in transition” .”Very clever juxtapositions. People looked happy and life healthy in Odessa in 1929”. A “staggering piece of filmmaking for 1929. Amazing cinematography and editing. Very interesting snapshot of soviet life only 12 years after the revolution”. So the film for some worked on one level with the apparent depiction of some parts of Russian life in 1929; we should remember that the film took four years to make and was released in 1929. However, while for many the film was a “fascinating record, the music distracted from its originality”, and “the overall impact was spoiled by much repetition and frightful soundtrack” others agree; saying that “the main film was challenging and quite extraordinary for its time” ….with “mesmerising images that held the attention throughout, inducing a trance like reaction, or would have done if not for the brutally intrusive, totally unnecessary Nyman soundtrack”. One commentator observed that the film “flicked about in a migraine inducing way”, and “could have been interesting with less technical wizardry and more attention to topics” another commented; “an hour of fascinating historic film spoilt by irrelevant, noisy aggressive soundtrack”. To one member the film represents “... the reason why I joined this film society. To be challenged, stimulated, educated and entertained. A thoroughly great evening. Keep it up”. While others told us that it was “possibly the least satisfying evening I had in 10 years”, “a wasted evening”, “one big headache”, “tedious music. Boring”. “Ahead if its time no doubt, but for my modern taste one of the most exhausting and sadly, boring hours so far at the film society”. “An interesting technical and creative feat for 1929, but hard to see the artistic point or theme in much of it”. One felt that they would “need reading notes and a test afterwards” with another saying “an hour I will never get back. Sorry not my type of film”.