A heartwarming film about two friends facing old age together at a hotel in the Alps. Great performances from Michael Caine, Harvey Kietel and Rachel Weisz. 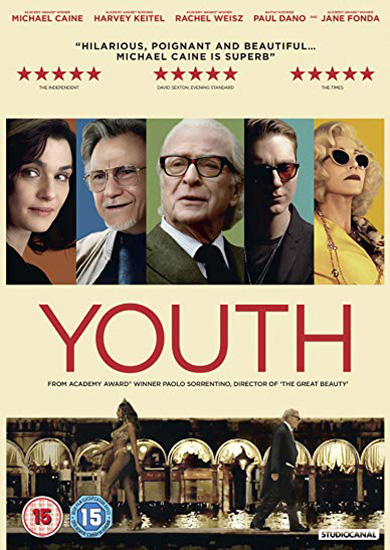 Paolo Sorrentino’s first English-language feature "This Must Be the Place" was an awkward affair… Youth is altogether more assured, although nonetheless strange – a hazy meditation on love and death interspersed with weirdly melancholic celebrity cameos. It plays out in a glamorous hotel-cum-health-spa at the foot of the Alps, where retired composer Fred Ballinger (Michael Caine) receives a royal invitation to conduct his popular score Simple Songs, while film-maker Mick Boyle (Harvey Keitel) assembles a group of young writers to compose his film “testament”, the ominously entitled Life’s Last Day. Sometimes the absurdist tragi-comedy rings true; a scene in which Fred conducts a field of cows is a magical musical delight, imaginatively orchestrated and beautifully played… yet occasionally the warring elements come together, finding plaintive and heartfelt song amid the cacophony of seemingly random voices. Caine is gently heart-breaking as the former maestro, bringing quiet gravitas to a role that he wears like an old overcoat, wrestling with the loss of memory and passion while playfully scorning levitating monks.
Mark Kermode - Observer
Paolo Sorrentino’s first English-language movie, This Must Be The Place … was a bit of a bust. So it’s good to see that with Youth he has regained the form of his best Italian work (The Consequences Of Love, The Great Beauty, etc.). We are in a plush Alpine spa resort where two old friends, retired Brit composer/conductor Fred (Michael Caine) and US movie director Mick (Harvey Keitel) have met up each year to enjoy the treatments, reminisce over their past lives and observe the to-ings and fro-ings of their fellow guests. A royal emissary (Alex Macqueen) shows up intermittently, trying to persuade Fred to perform for Her Maj. and there’s Rachel Weisz as Fred’s daughter, who’s married to Micks son but caught in a love triangle with pop star Paloma Faith (playing herself). All sounds a bit inconsequential? Indeed it is and that’s its charm. Caine and Keitel make an unexpectedly relishable double act, Caine’s laconic wit playing off Keitel’s wiry urgency. Underlying it all is a quiet meditation on growing old, on memory, faded love and regret for lost ideals. But darker implications are offset by the limpid beauty of Luca Bigazzis photography and Sorrentino’s clear delight in the infinite vagaries of lived emotions.
Philip Kemp Total Film.

What you thought about Youth

Thank you so much everyone for taking the time after the last screening to fill out the comments slips. “Too long. Original but depressing”. “Bit too long on a hot summer night…would have benefited from a tighter edit”, were the first two comments that I read from the envelope of slips after the screening of our season opening film, “Youth” and I was immediately conflicted because I agreed with the “too long” comment but additionally thought oh dear I hope they are more positive observations. There were, and I am happy to report that the film was appreciated by the majority of you with praise for the acting, music score, (composer, David Lang) and the photography by Luca Bigazzi in general but also “the spectacular scenery”; drawing most comments. This “wonderfully atmospheric film with another masterful performance from Michael Caine”, and a “tour de force performance by Michael Caine followed in merit by Harvey Keitel” with “Paul Dani and Rachel Weisz excellent too” reflected many opinions. So for many this was “a great opener for the season”…. one observer thought the film was “totally original …fascinating direction with arresting music. An interesting and quirky exploration of what matters in life and what is important as we age.” But had a final thought….”Michael Caine still can’t act”. However, “Absolutely wonderful. Brilliant filming and extremely thought provoking acting. More like this please” was the general consensus. The word “amazing” cropped up a number of times with “An amazing film. Complex, deep, an exponent of sound and vision. Great performances. A commentary on our hopes” and “Amazing. Wonderful photography, great scenery hypnotising acting, lovely music.” For a film tackling the theme of ageing some “Did not really understand a lot” and wondered….”was it just old age”. With “Excellent music…but I’m too old to follow this” echoing the thought. But as I said initially there were some issues with the length and also the storyline. One said the film was “Too long but memorable”. The statement. “Riveting, sensuous, innovative film; wonderful cinematography, great acting. Too long” reflected a number of points of view. “Perplexing. Not sure I understood it. The last scene was magnificent and I tried hard to understand what was happening however I am pleased to have seen this film” and “Engaging and disengaging…..astonishingly funny at times…. why didn’t we laugh more” were other observations I wanted to share with you along with “Too long… too much bound up in a world of privilege and self-obsession” and “I did not understand the symbolism”. Many of you “loved the cameos.” “My ex to be husband” line by Jane Fonda stayed with one observer. Another thought their enjoyment was enhanced by the sound quality in the room and asked “Do we have new quadrophonic sound?” but for one this was “Self-indulgent too complex” and for another…”too long, boring, portentous and self-indulgent”. And the conflict many of you had was summed up by “Excellent performance splendid scenery superb sets. But ultimately boring... I kept wanting it to finish…. a parable about ageing and with a few startling vignettes’… hope future films will grab us more than this”. And I am sure they will.