A chance encounter between a dejected music- business executive and a young singer-songwriter new to Manhattan, turns into a promising collaboration between the two talents. Star turns by Mark Ruffalo, Kiera Knightley and James Cordon. 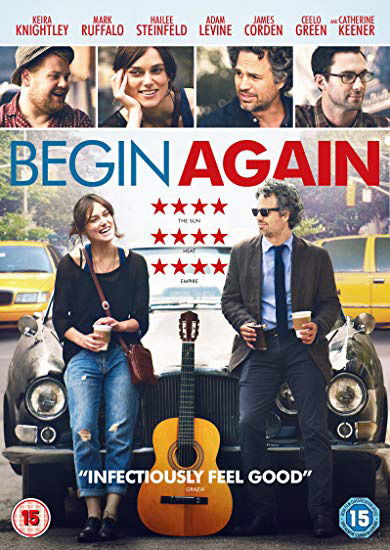 What you thought about Begin Again

Clearly the time of year had many of you in generous mood with some imbued by the mince pies and wine no doubt; others however were given to indigestion by our Christmas offering. The most often repeated phrase used in the comments was “a nice feel-good film” followed quickly with “a shame about Kiera Knightley “in one form or another. On the positive side this was augmented with “loved it; a really good film. Great music, lovely Kiera. What more would you want for Christmas?” One member “so thoroughly enjoyed this movie “that they look forward to watching it again when I manage to borrow the disc. Thank you, a great selection”. For another it was a “perfect winter warmer, light and fulfilling”. Yet another thought it “funny, smart, sad….a love story to NYC. Ruffalo a pleasure. The let’s put on a show formula reinvented for the 21st Century” contrasts with “Felt like it had been written by a drama student – full of clichés and pretentious. I am surprised that they persuaded those big names to take part”. However, the pro comments kept coming with a “very good choice for pre-Christmas, a feel good film with a good soundtrack and of course Kiera Knightley and James Cordon”; “light and untroubling like a nice Chardonnay” although it “charmed itself into my good books and had a brilliant ending in spite of the awful music”. Another told us that “after a rather slow start and agonising build up –it got there in the end as a feel-good movie but not sure Kiera Knightley was the right choice but it made it over the line”. Other comments about the casting reflected that most of you felt that “Mark Ruffalo… carried the film”. Some were “… surprised that actors of the calibre of Kiera Knightley and James Cordon were involved in this film”. But “Kiera Knightley was more like a flirty schoolgirl – unsuitable” summed up many thoughts and “although a feel-good film – it needed a different female lead with more mystique etc., not Kiera, doesn’t quite hit the spot”. This musical film had as you have already seen contrasting views about the music. “Music was not as bad as you led us to believe!!! And “a real statement about the music industry. And of course NYC”. Other comments about the film were that it was “better than I expected! A bit predictable but a charming rom com and pleasant characters. Well-acted but with fairly forgettable music”. “CHEESY – but a well needed change of tempo for this season”. “Throughout I felt this was a 3/5 but good not average. A sweet endearing film – feel-good and quite a refreshing change”. “This was an OK, sweet little film – the sort you might rent for a rainy Sunday afternoon. Not sure why it would be chosen for a film society”. “Enjoyed the storyline and some of the humorous touches. Was a bit bored during some of the music scenes”. “Rather slight and fluffy. Slightly entertaining but not great cinema”... “An evening wasted. I could have been wrapping Christmas presents or washing up!”. “Good for its target audience – but that wasn’t me”. “Less good than the average GFS offering, therefore below average. Slightly intriguing but will not live long in the memory”. “Truly awful”. “I fell asleep”.