One of Kurosawa's masterpieces. Set in 16th Century Japan, an elderly warlord retires, handing over his empire to his three sons. However, he vastly underestimates how the new-found power will corrupt them, or cause them to turn on each other... and him. This is a reinterpretation of Shakespeare's King Lear. 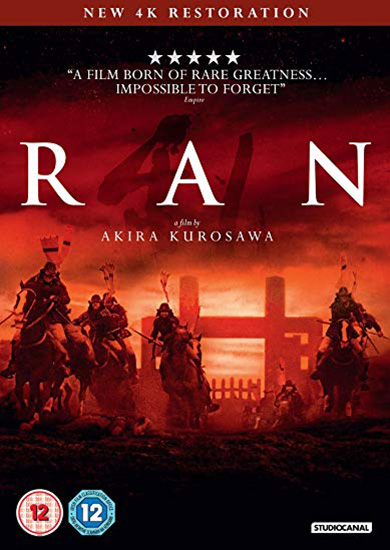 What you thought about Ran

Thank you for your responses. We had an audience of 80 for Ran on a bitterly cold night and although many of you praised this “epic” and “magnificent film” which had “wonderful cinematography, costumes, music” and a storyline which was “heart breaking, sad and unforgettable,” many of you complained that it was “way too long!” However, the words “Exquisite” and “Stunning”, recurred most often, while “Brilliant” was close behind. Many of you told us that this was a “wonderful epic film - never less than riveting”, and “great to compare with Lear (having seen it at Stratford a month or so ago)”. There were other observations about the scale of the film with “no CGI gimmicks - Kurosawa being an artist himself, every scene was an art work. He is in a different league”. Some thought that the “battles were atmospheric but unconvincing” and overall that the film was “puzzling at times but powerful and engaging, needing a code for the army colours”. Other praise came in the following notes: “Wow it took a long time to get going but what an epic ending”. “A visual tour de force – riveted by the fabulous costumes, scenery and battle scenes – especially those that were accompanied by music”. “I have waited a long time to see this movie and wasn’t disappointed. Great cinematography. Gorgeous costumes”. “An epic piece of film making. Slow to start but then Wow”. “Genius”. “Well worth watching. A glimpse of old Japan”. “Good performances – fantastic battle scenes” “Rather long, with people running about in all directions, but given the genre it was visually stunning with many convolutions of the plot to hold the attention. Deservedly a classic, but of its time”. “Hard work, but I am glad to have seen this film. Music and soundtrack was haunting”. “Visually very exciting – the troops, the makeup and the costumes. Sparing use of music was excellent. I enjoyed the film much more than I had feared. Fraternal rivalry”. There were many symbols used during the film and one contributor asked “was the cuckoo on the soundtrack ironic?” and what did the “moth that lady Kaede catches in her cloak represent”. There is an excellent analysis and explanations of the symbolism of Ran and comparisons to Lear in a book by Alexander Leggatt for those of you that are interested, available on the Internet. One member said that it “certainly highlighted the absurdity and futility of mans endless need to wage war, a masterpiece” and another commented that “despite the length, the time passed quickly”. For others although it was an “impressive spectacle”, it “smothered the drama” and another member said that “Kurusowa is a brilliant film maker but the mores and honour obsession of a sad martial society alienated me to the entire world being portrayed”. While another said that they felt it was “seriously tedious. Shakespeare did it much better” and another’s conclusion was that it was “overly melodramatic, too long and the acting was laughable in places”.