When we were Kings

A documentary of the 1974 heavy- weight champion- ship bout in Zaire, "The Rumble in the Jungle," between champion George Foreman and underdog challenger Muhammad Ali. 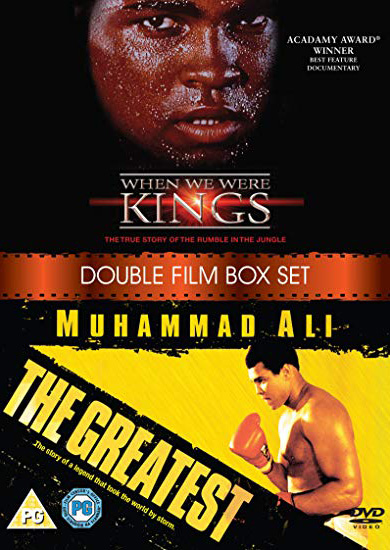 Into the capital of Kinshasa (Zaire) flew planeloads of performers for an “African Woodstock,” TV crews… an international contingent of sports journalists, celebrity fight groupies like Norman Mailer and George Plimpton, and of course the two principals: Ali, then still controversial because of his decision to be a conscientious objector, and Foreman… fearsome and forbidding. "I'm young, I'm handsome, I'm fast, I'm strong, and I can't be beat,” Ali told the press. They didn't believe him. Foreman had destroyed George Frazier, who had defeated Ali. Foreman was younger, bigger and stronger, with a punch so powerful, Mailer recalled, “that after he was finished with a heavy punching bag, it had a depression pounded into it.” Ali was 33 and thought to be over the hill. The odds were 7-1 against him. Leon Gast's “When We Were Kings,”… (it won the 1997 Academy Award for Best Documentary, Features) is like a time capsule; the original footage has waited all these years to be assembled into a film because of legal and financial difficulties. It is a new documentary of a past event, recapturing the electricity generated by Muhammad Ali in his prime. Spike Lee, who with Mailer and Plimpton provides modern commentary on the 1974 footage, says young people today do not know how famous and important Ali was. He is right. “When We Were Kings” captures Ali's public persona and private resolve. Seeing the film today inspires poignant feelings; we contrast younger Ali with the ailing and aging legend, and reflect that this fight must have contributed to the damage that slowed him down. It is also fascinating to contrast the young Foreman with today's much-loved figure; he, too, has grown and mellowed. When the movie was made all of those developments were still ahead; there is a palpable tension, as the two men step into the ring that is not lessened because we know the outcome.
Roger Ebert - Chicago Sun Times - Feb 27th 1997
At the height of his stardom, Muhammad Ali was possibly the most famous man on earth. Cocky, dynamic, a tremendous athlete and a wizard at homespun, extemporaneous verbal gymnastics, Ali had the world on a string. It's that Ali, and not the ailing, middle-aged legend he became that filmmaker Leon Gast captures in "When We Were Kings". Gast, who worked on the film for 23 years, takes us back to September 1974, when Ali flew to Zaire for "The Rumble in the Jungle," a boxing match against George Foreman, the heavyweight champion and the fiercest opponent he would ever face. On a deeper level -- and this is where "When We Were Kings" exceeds its expectations and becomes a great film -- Gast examines African American pride. He records a time when Ali, loud and "pretty," became a worldwide symbol of black self-determination and gave his brothers a bolder, stronger image of themselves than they'd ever known. By portraying the young Ali as hero -- and moving beyond the media image of the poetry-spouting peacock -- Gast reminds us that Ali didn't follow the path of earlier black superstars or, earn his stripes by conforming to white society's expectations.
Edward Guthmann - San Francisco Chronicle - Feb 14th 1997

What you thought about When we were Kings

A lower than average audience turned out for this film. We have been told than certain members were put off by its subject matter, boxing. However for those of you who did attend, these observations; “I don’t like boxing but this was excellent…it really drew you in. Very moving too”. “Not a fan of boxing but this was intriguing and entertaining with a surprising amount of tension”. “Not a boxing fan…. this film showed it in all its brutality”, reflected the impact that this Academy Award winning documentary had on the audience. The structure of the documentary with “the scenes of Ali that were interspersed with life in Zaire, extraordinary interviews”, “good editing” and “fantastic soundtrack” helped to “really portray the charisma and character of Muhammad Ali” delivering a “beautiful film” which showed “his grace, his physical beauty and his sharp wit”. For others the impact was “inspirational”; delivering “a thought provoking view on a lost era” with a “beautiful portrait of a beautiful man after his prime was thought to have been over”, made many times. The emotions were heartfelt, with one viewer admitting that “not many films move me to tears. This one did. Not through sadness-but joy. Joy at seeing a man at the top of his game-as a great boxer-the greatest, and a human being”. “What can you say….he was the greatest and this uplifting documentary painted the perfect portrait”. So inspiring in fact that there are “not enough superlatives to do this film justice”. There were many other observations about Muhammad Ali, mainly complimentary, and ranged from “Ali only gets more iconic….”, “… this documentary was “very sympathetic to Ali”…and showed “He was a man of mental and physical strength” and “what an athlete and human being”. So while for the majority “this really was a very entertaining, moving and exciting film with a great sound track”, “about a great man!” There were a couple of comments made about “another side of Ali’s life not touched on in the film” with a “good account of the fight but a one-sided view of Ali. He was a misogynist” and “didn’t comment on the fact he was a woman hater”. One observer commented “Interesting to compare to Julien Temples recent films”…while commenting “this is a great film, with a great soundtrack…” You will have to look up Mr Temples films on IMDB also, but the documentary “The Ecstasy of Wilko Johnson” is definitely worth your while. I loved “Not brill, but George thanks for the grill”. Almost poetry. In terms of selection, “When we were Kings” was considered “100% better than the previous film” and another observed that they were “glad you selected something so important and culturally relevant”. But “the soundtrack was not too clear at first “and “the sound again spoiled my enjoyment” with the “sound a bit challenging at times” led one observer to comment maybe “sub titles would have been helpful”. Finally to end with a couple of interesting critical notes. One member felt that the “film completely misses the political point. The people of Zaire supported Ali because he was the underdog. He represented their resistance against the dictator Mobutu…….” And “too much time on music/time in Zaire and not enough (for me) on the background, family etc.….”