Brilliant portrayal of five Turkish teenage sisters growing up under strict Islam rule. The sisters share a passion for freedom and find ways of getting around the constraints imposed on them. 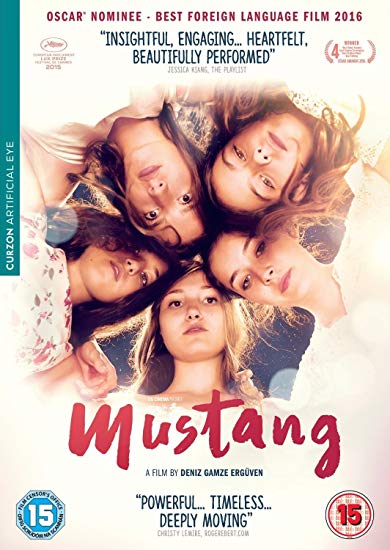 What you thought about Mustang

After the challenge set by the Lobster many of you clearly welcomed “a proper film” and said that it “was the best film so far this season”. This is borne out by the statistics. 138 came along to the screening of Mustang with 76% of you taking the time to complete a comment slip. The aggregate score of 4.53 does indeed make it the most popular film so far this season. Thank you. You complimented this “powerful and wonderful film” which had “superb performances from the girls, especially Lale” and “the lovely soundtrack”. You were equally entranced by “the brilliant direction, photography and editing”. The storyline identified a “fascinating insight into a Turkish family’s life “which you found to be both “riveting and frightening in equal measure” with “the five sisters acting like a true family”. Others said that the film was “a beautiful and sensitively presented picture of a very alien life – and yet with many resonances with our own society” and “tremendous acting from everyone, but the little narrator was amazing. One of the best films so far”. Many of you became immersed in the film to such a degree that the comment, “of course what we really want to know is: what happens in the future adventures of Lale and Nur? Is the evil uncle – whose own demons have brought the situation about, brought to book?” was echoed by many along with “So happy it was a good ending” and “will there be a sequel?”. A couple of you “felt sorry for the grandmothers though”. The girls situation as portrayed in the film had many of you pose questions like “is Turkey ready for the real world!?” and “do we really think that a society with these mores is fit to join Europe?”. It also elicited the comments; “makes me furious as a woman” and “a fabulous and thought provoking film that makes us realise how lucky we are to be women in the West”. One observer remarked that “It can be done. You don’t need all those symbolisms. A very well presented film, full of drama and tension which holds your attention completely”. . For others the film was “moving and very angry making” with a “heart-breaking story” and “a triumph of feminine energy and spirit over the dead hand of male authority and social traditions”. However there were these comments as well; “too long and somewhat disjointed” and “almost simplistic glimpse into the major issues of gender, inequality, rape forced marriage, abuse, exploitation, honour based violence – lacking any depth, detail or emotion. Most poor”.