In Order of Disappearance

Stellan Skarsgard plays the honorable citizen Nils, who ploughs snow in the wild winter mountains of Norway. An incident ignites a war between the vegan gangster "the Count" and the Serbian mafia boss “Papa”, and Nils takes action. 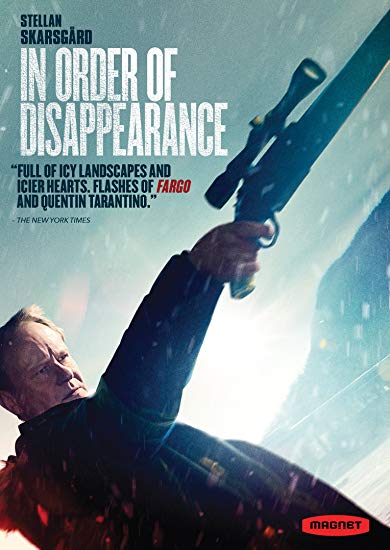 What you thought about In Order of Disappearance

123 members and guests attended this screening, 64% of you completed the comments slips. There were so many good comments about The Disappearance that I have put the full report is on the website. This is a shortened version. The references to others film makers work made by the professional reviewers found their way into many of your comments, and you also made some quite clever puns; giving the film a different title and playing with the fact that the film was set in Norway. One observer quoting other influences said that it was “not so much Tarantino… apart from some of the dialogue – and in any case better done, less knowing”. This reviewer also felt “the humour… more like Truffaut’s, Don’t Shoot the Pianist or Fargo… also a bit of Blue Collar and Point Blank and a big Leone finish. But in the end its own film. Excellent.” Another told us that “although definitely influenced by the Coens and Tarrantino, it lacked the characterisation and the storytelling that they bring to their work. A few moments of black humour stopped it from being very poor”. Other film references kept coming with “wonderful – Straw dogs meets Scandi Noir. I loved it”, “Brilliant! OK Corral meets Reservoir Dogs meets Wallander?” “Very Kill Bill. Stylised violence and humour so well plaited together”. “Sergio Leone comes to Lapland. Crazy movie, but entertaining”, A bit like the Godfather and High Noon combined!” “Better than Tarrantino. Dry humour. Excellent psychopath character as The Count”. Some thought this film was “brilliant”, others “loved it – music – the whole bit, finishing with a Leone homage by calling it “A Fistful of Krona.”. Many “loved the scenery….and the snow machine” but did not “love the details of the murders – although “appreciating the humorous moments in macabre situations”. One of you wrote that the movie resonated a “dark twisted humour with stellar performances and the violence against the pristine wilderness added to the atmosphere”. But there were numerous comments that identified the poor execution of the subtitling process with “you can’t go wrong with Stellan Skarsgård. Pity about the subtitles”, “enjoyed the Black humour in the white landscape!”, “Great cowboy film! Shame the subtitles were white. (Scandi – blanc?)”. Not everyone agreed and said that in their opinion there was “too much gratuitous violence, not good for Norwegian Hygge (It means a state of lovely cosiness).”, “ Did they run out of actors?”, “tedious and monotonous”, “once you got the plot there were no surprises. I don’t think there was much original thinking in it. Having said that it was a reasonable 2 hour romp”. And one of you “loved David Beckham as The Count”. Many found it “riveting…everything you should get from a first rate thriller” and thought it “dark, violent, funny”...with good pace”, and “never thought I would find serial murders so entertaining”. A Strictly fan said, “In the words of the great Craig Revel Horwood, fab-u-lous darling”. And another told us that it was “Wonderful! Blackest, funniest comedy. Loved the soundtrack – how the various grating/scraping sounds fed into each other. Landscape wonderful – its Norway! Could watch it again and again!” Other comments are listed here. “..That’s what I call a feel good film”, “sometimes difficult to follow...bad subtitles on white snow!”, “best so far. Lend it to the BBC”, “Not everyone’s cup of tea, but I loved the photography, scenery, dark humour and the music. Memorial crosses inspired!!” “Infinitely better than Kiera BTW”, “very good. Had me on the edge of my seat all the way through”, Excellent – gripping story. Emotional content spiked with the right amount of humour”, “not quite what I was expecting!! Very Nor/Swe! Great soundtrack. I liked the black humour – deadpan expression – death notices – at least I could keep track of who had been killed”. “A son for a son in the end”, “good though not really my sort of film – don’t really like violence used as entertainment. Very Coen though!”, “I would never have chosen this had it not been for GFS, but I am very glad you picked it. Intriguing, surprising and funny”, “good taut crime drama nicely punctuated with moments of noir humour”, “well-made but I felt ashamed that so much skill should be used to seduce me into sharing the morals of the fictitious characters”, “enjoyable, witty, absorbing….a bit macabre, but no regretted deaths”, , “well played but rather predictable. Nevertheless, I enjoyed the very dark humour”, “twisted morality tale – the worst baddies lost. Jolly well-made though – great cinematography. Very Coen. Thoroughly enjoyable”, “Boring, vulgar, gratuitous violence – if that’s humour, count me out”, “didn’t sustain the pace. Not sue it what it wanted to be. Tarantino does it better”, “engrossing quest. Appealing to all our basest instincts. Nice line in chairs too”, “lacked credible character development”, “good acting made up for a poor story”, “quite the worst film you have shown as far as I am concerned. Not helped by the difficulty in reading the subtitles. Not clear to me most of the time who was on whose side and what they were trying to achieve”, “boring – stupidly violent –who cares!”, “a horrible film. Both boring and brutal. No human interest really. The moments of humour just jarred. The photography and scenery redeem it from the lowest category”.