"Remember" is the contemporary story of Zev, who discovers that the Nazi guard who murdered his family some 70 years ago is living in America under an assumed identity. Despite the obvious challenges, Zev sets out on a mission to deliver long-delayed justice with his own trembling hand. What follows is a remarkable cross-continent road-trip with surprising consequences. 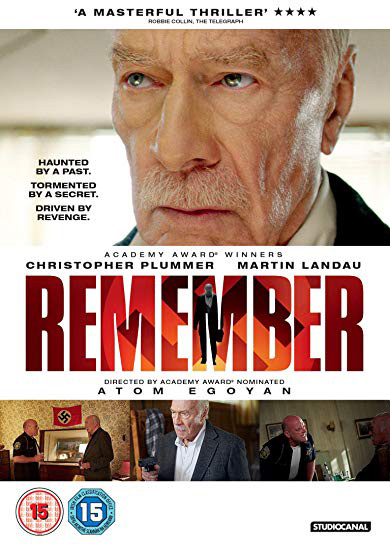 What you thought about Remember

At our last screening we were entertained by a full programme delivered to an almost full house. 164 watched Michael van Koetsveld’s short film “Falling in Love”, which was part funded by the GFS. At the Q&A there were some keen observations and praise for Michael and his team’s efforts. Some of you also reflected on the film in your comments. “I very much enjoyed Michael’s short. Tight and effective story line with a wonderful suspense ending that happily resolved the tension. Well done”, was typical. Other comments were “Great but too short a time to fully appreciate the wonderful twist at the end. A film whose title reflected the story”. “Well done the van Koetsveld family for the perseverance and Michael for bringing an idea to fruition and producing a very good end product”. However, there were other comments about the fades to black and the poor sound quality in the early scenes. Michael and his actors, crew and well-wishers left to show the film again at the Star. 130 remained to watch Remember and 67% of you provide responses with scores that has made it the film of the season so far, edging out by 0.01 point, Au Revoir Les Enfants. Riveting, powerful, brilliant and gripping are four words that appear many times in your reviews of the film. The acting performances, but particularly by Christopher Plummer were universally praised. One member commented, “A Tour de force by Christopher Plummer – his best performance ever. AND what an ending. Rather like Michael’s short, a big shock”. Others agreed, “Wonderful acting – fantastic ending, best film yet. We had two films tonight with great story lines and endings”. “Brilliant. The movie is as light-footed as Zev is not. Constantly changing in tone and direction to subtly wrong-foot the viewer moving to a stunning finale. Both Plummer and Landau – neither of whom I liked much in their younger days - are excellent”. Another sent an e mail the following day as follows: “I just wanted to say how much I enjoyed the film of Remember, a very sensitive topic and the story was portrayed well. Excellent cast, the scenery, the way the story captured your attention from beginning to end and never expected the outcome.Thank you for showing this film and a warm thank you to your team for spending the time to select this film! Excellent choice”. Other comments included the following: “A hard hitting drama with a brilliant central performance by Christopher Plummer. I did not see the twist at the end coming!” “Brilliant. Plummer still fantastic. So powerful and held the attention all the way through. Tense and powerful yet managed glints of humour too. Raised various ethical issues too – when (if ever) is revenge too late?” “Stunning performance by Christopher Plummer which overcame the implausibility of the plot”. “Very powerful and gripping. A deep and provoking film about ageing. Identity and revenge. An unhappy moral twist at the end”. And of course someone had to write – I will certainly REMEMBER this one – sorry!” This commentary and more of your observations may be seen on the webpage. “Gripping and interesting plot. The view of box cars from the bus apparently linking Zev being transported – helping to convince us of his Jewishness”. “Superb –with a very good twist at the end! “A brilliant film. I feel too emotional to write more”. “Cleverly constructed and very well thought out. Use of letter clearly highly significant”. “Wonderful performances from the old timers. (Better than in their salad days)”. “I remember the searches made for the Nazi SS men”. “An amazing film. Clear bur subtle and atmospheric”. A well-made film. Plot a little improbable. “Dementia detective” – Really??” “Brilliantly acted and a sustained sense of menace. Depressing subject”. “Enjoyed the film very much, but question whether his dementia was advanced enough for him not to recall he was an SS officer and not a prisoner”. Scoring the film good, one reviewer says that “having had experience of a relative with Dementia, there is no way he could have travelled alone such a distance even following instructions, so for me this made it all very implausible”. “A better ending would have been for Max to be revealed as the third guard showing the next number in sequence on his arm. This plot to kill the last two that could unmask him being successful”. “A very well made film, well-acted. However a rather silly story, even as an allegory of the futility of revenge. Felt it was below the average of the films at the GFS and below average is only poor”.