Anatomy of a Murder

A shrewd small-town lawyer defends a man in a murder trial who claims he suffered temporary insanity after the victim raped his wife. But what is the truth? 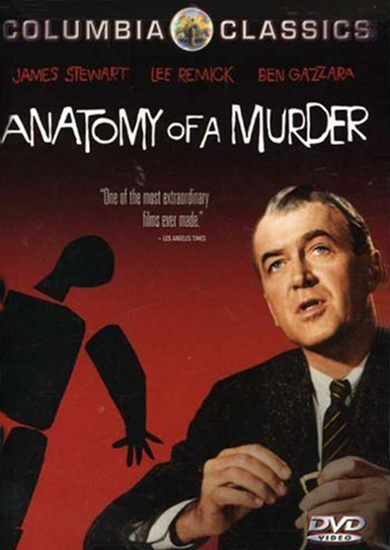 After watching an endless succession of courtroom melodramas that have more or less transgressed the bounds of human reason and the rules of advocacy, it is cheering and fascinating to see one that hews magnificently to a line of dramatic but reasonable behavior and proper procedure in a court. Such a one is "Anatomy of a Murder," which opened at the Criterion and the Plaza yesterday. It is the best courtroom melodrama this old judge has ever seen. Perhaps "melodrama" is the wrong word.

Perhaps it would be better to say this is really a potent character study of a group of people involved in a criminal trial. For Otto Preminger, who produced and directed it from a script adapted by Wendell Mayes from the highly successful novel of Robert Traver (Judge John D. Voelker), has got as much fine illumination of the major personalities in this case as he has got strong suspense and pounding drama in the unfolding details of the trial. Following the line of "Mr. Traver," even to the point of shooting all his film in the actual up-country of Michigan where the fictional murder case is set, Mr. Preminger has fittingly developed the sharp illusion of a realistic look, uninhibited and uncensored, at everything a small-town lawyer does to prepare and make a courtroom presentation of the defense of an accused murderer.

Neatly and with much local color, he finds the known facts in the case—that a moody young Army lieutenant has shot and killed a man, a tavern owner, whom the wife of the lieutenant says has raped her outside a trailer camp. Frankly, he drops the suspicion that the wife may be a bit on the shady side, that she may have been lying to the lieutenant and that he may be a mean, unstable type. And then, with this tempting information, he takes the case into court and achieves the succeeding revelation of character and conduct in that stringent atmosphere. Actually, the major conflict and dramatic fascination from this point on is the battle of legal wits and personalities that is waged between the defense attorney and those of the prosecution, under the watchful eye of a shrewd, sardonic old judge. It is a beautifully drawn and maneuvered battle, full of neat little triumphs on each side, leading to a most exciting climax and clear exposures of the principal characters.

Most brilliantly revealed is the character of the lawyer for the defense, a part that is played by James Stewart in one of the finest performances of his career. Slowly and subtly, he presents us a warm, clever, adroit and complex man—and, most particularly, a portrait of a trial lawyer in action that will be difficult for anyone to surpass. On the bench as the judge, Joseph N. Welch of Boston, the lawyer who distinguished himself in the Army-McCarthy hearings, does an unbelievably professional job. He is delightful and ever so convincing. Mr. Preminger scored a coup in getting him.

George C. Scott as a prosecuting attorney makes the courtroom battle a deadly duel by offering himself as a skillful and unrelenting antagonist, and Brooks West as his standard-brand associate adds to the personal variety. Lee Remick treads beautifully a fine line between never-resolved uncertainties as the wife of the lieutenant and Ben Gazzara makes the latter role one of the haughty and haunting mysteries and ironies of the film. Arthur O'Connell as a sozzled attorney and friend of Mr. Stewart, Eve Arden as the latter's secretary, Murray Hamilton as a witness for the state and Kathryn Grant as a friend of the slain man turn in excellent jobs.

Outside of the fact that this drama gets a little tiring in spots—in its two hours and forty minutes, most of which is spent in court—it is well-nigh flawless as a picture of an American court at work, of small-town American characters and of the average sordidness of crime.

As part of the NFT's Otto Preminger season, his great 1959 courtroom drama, Anatomy of a Murder, is back in a newly struck print that will be going the rounds of regional film theatres. As well as being a serious filmmaker, Preminger had an eye for provocation and sensation and, in this tale of rape and homicide in rural Michigan, he challenged the Hollywood censors and shocked audiences with words like 'intercourse', 'spermatogenesis' and 'panties'. The movie made stars out of George C Scott (ace prosecutor), Lee Remick (floozy fatale) and Ben Gazzara (shifty murder suspect defended by small-town lawyer James Stewart).

It also features Eve Arden, the screen's best tough, wisecracking secretary, Arthur O'Connell, its best boozy sidekick and that bizarre semi-heavy Murray Hamilton, who went on to be Mr Robinson in The Graduate and the mayor in Jaws Duke Ellington wrote the jazz score, appears briefly and is given one marvellous period line ('You're not splitting the scene, man?'), and there's a splendidly pawky performance as the presiding judge by Joseph N Welch, the middle-aged Boston attorney who destroyed Joseph McCarthy on television in 1954. There is also one of the final screen appearances by Kathryn Grant who had recently married Bing Crosby. The picture is superbly photographed by Sam Leavitt in black and white, though there's nothing black and white about the movie's morality.

What you thought about Anatomy of a Murder

There were 109 members and guests at the last screening providing 59% responses. The majority view was that The Anatomy of a Murder was “mesmerising” and “absolutely brilliant!”…One member said that it was “one of the best films I’ve ever seen - with precision dialogue… beautifully crafted and brilliantly acted. A classic”. The praise continued with comments such as a “superb film - the script was brilliant as was the cinematography and the acting. Some lovely humour, too especially the judge and James Stewart” and “superb performances by the complete cast – great soundtrack – a great evening. Tension held until the end – still have doubts about the verdict!” That last comment was shared by a number of you and there is more information on this film and the role it played and continues to play in tutoring lawyers in USA courtroom procedure on the internet when you search for Otto Preminger.

The plaudits kept coming, with a “high class drama in black and white. James Stewart magnetic”, “cleverly scripted and wonderful characterisation”. “Unsurpassable – brilliant acting, direction everything. A true classic”. “Great to see a classic like this”. “Black and white filming made the whole thing really gripping”. “Great film – alongside 12 Angry Men”. “I’ve seen an awful lot of courtroom dramas in my time and none better than this. Fully dramatic without losing credibility or subtlety, superb ensemble acting”. And in answer to the question “does it predate 12 Angry Men?” No that was released in 1957. So while you were pretty much all agreed that it was “very atmospheric, with great acting and an excellent script with a mixture of tension and humour, and enough red herrings to confuse even Sherlock Holmes with the music spot on,” one said that the film was “excellent and very atmospheric- loved the Duke Ellington soundtrack – but a bit too loud.”

There were some additional comments on the music score which ranged from “excellent music score by Duke Ellington” to the film “held my attention throughout but couldn’t stand the dreadful racket of random notes called jazz. It actually hurt at times”. “The soundtrack was much too loud and the music dreadful”. Several of you thought it “a product of its time”… “Stylistically a bit dated, but certainly held the attention with some superb performances”.

Yet another thought it “witty and fast-paced, despite the 2hr 40 min. Quirky. However, much satirised by the “Naked Gun” films” and another told us that it was “clever and amusing but a bit too long”. “Made before the days of strict continuity in filmmaking…nevertheless excellent performances and good characterisation”. “A sweet old-fashioned film. Well-acted and performed slowly enough to enjoy!” “Shows how films have changed – it was a very dated presentation, but interesting for that reason. Acting was good of course – with James Stewart – to be expected”.