Embrace of the Serpent

The story of the relationship between Karamakate, an Amazonian shaman and last survivor of his people, and two scientists who work across the course of 40 years to search the Amazon for a sacred healing plant. 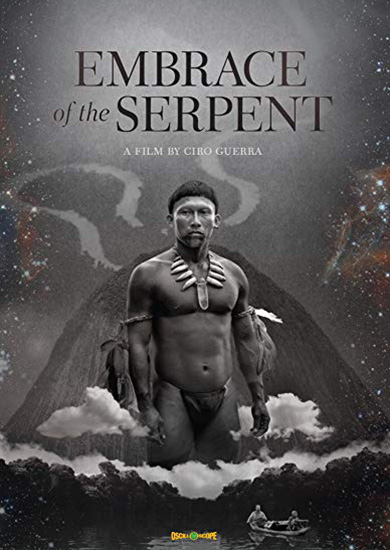 What you thought about Embrace of the Serpent

As I have commented in the past, I have been astonished by how many of you are able to deliver concise views of the film you have just watched a mere few minutes afterwards. However, this was not universally the case with Embrace of the Servant which, while it was considered by many of you “an amazing film”…with “marvellous scenery and photography and music” it also gave rise to this oft quoted cry “I don’t know that I understood all of it”. One commented that they considered it “thought provoking, fascinating but ultimately baffling”. “Good in parts. Probably the most extraordinary film I have seen. Strange, puzzling, very atmospheric and dreamlike. I could not believe it was a true story!” “I need a week to think about it”. “Puzzling”. And again the refrain “I didn’t understand it all – but what an experience”. One reviewer told us that in their opinion “It flowed like the great river, with depths and treacherous, unexpected currents as it carried one along”... “I felt, as I know I was meant to, that much was beyond my understanding and made me realise how much more there is to understand….Brilliant!” However others thought it “a fascinating film that showed all too clearly the ways cultures fail to comprehend each other’s beliefs” which was “very thought provoking and tragic in so many ways”. “A bit too long, but a memorable and enlightening exploration of the deplorable impact we have had on the planet and its people”. “Wonderful – deeply moving and thought provoking. If only we had the gift to respect other cultures”. “Mesmerising”. “A wonderful mix of culture clash, unbelievable mysticism, romance, economic dilemma, tyranny and love”. “Turns out that the “cannibals” had it right all along. Viva Las Prohibiciones. An ode to discipline and respecting our planet”. “An enigmatic film in part but shows the deprivations of progress”. The choice by the filmmakers to shoot in Black and White prompted numerous observations. Although one of you considered this “an astonishing film” you also “longed for colour but was shocked when it came…” and another said that they “liked the B+W as opposed to colour. It gave it a different dimension”. “I found it ultimately disappointing and tiresome and longed to see the colour of the jungle”. “A beautiful, thought provoking film. The jungle was terrifying because everything was hidden. The only obvious thing was the inhuman behaviour of man to man fed by greed. It was a wonderful experience, black and white was best. It left me feeling very sad”. “Which drugs were they on? Poor continuity spoilt a good trip”. “A fascinating film – amazing photography and music to evolve the mystery and sadness of a vanishing society. A wonderful study of culture clash. There is so much we do not understand. I was once cured by a shaman”. “Haunting take on a familiar parable. The finale particularly good. Reminiscent of all of the “Heart of Darkness” inspired movies”.