Once Upon a Time in the West

Epic story of a mysterious stranger with a harmonica who joins forces with a notorious desperado to protect a beautiful widow from a ruthless assassin working for the railroad. Stars Charles Bronson, Jason Robarts, Henry Fonda and Claudia Cardinale. 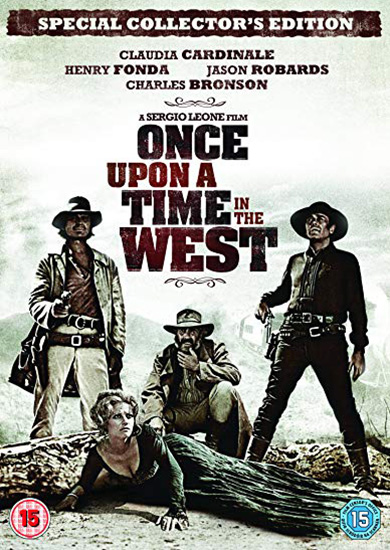 The BFI last rereleased Sergio Leone's 1968 revenge western 10 years ago, in a newly complete cut of almost two-and-three-quarter hours. Its reappearance now is in honour of a new restoration. After watching it again, however, I have to admit to feelings of restlessness. The movie is as mysterious and mesmeric as ever, with its grandiloquent panoramas and mad, melodramatic closeups on sweaty and malevolent faces. Everywhere, death and the fear of death are present under the burning sun. The opening pre-credit sequence, with its squeaky wind-wheel in the wilderness, is still great, and this revival may redouble the film's claim to metaphysical masterpiece status: something to be compared to Antonioni. But there is also something opaque in its sprawling and often baffling tale of unscrupulous gunslinger Frank (Henry Fonda), escaped felon Cheyenne (Jason Robards), an impassive tough guy nicknamed Harmonica (Charles Bronson) and their bloody battle for a farmstead owned by a beautiful widow and former New Orleans prostitute (Claudia Cardinale). The plot is not fully explained until the 90-minute mark and Harmonica's motivation isn't disclosed until almost the very end. Narrative issues also arise when Cheyenne appears to be packed off to prison but then reappears, having evidently escaped in what may or may not be lost footage. Perhaps the clearer and crisper this film appears, and the more its reputation grows, the more unsettling its indulgences and ellipses appear to be. Well ... never mind. It's still a landmark.
Peter Bradshaw, The Guardian, 24 July 2009.
Sergio Leone's "Once Upon a Time in the West" is a painstaking distillation of the style he made famous in the original three Clint Eastwood Westerns. There's the same eerie music; the same sweaty, ugly faces; the same rhythm of waiting and violence; the same attention to small details of Western life. There is also, unfortunately, Leone's inability to call it quits. The movie stretches on for nearly three hours, with intermission, and provides two false alarms before it finally ends. In between, we're given a plot complex enough for Antonioni, involving killers, land rights, railroads, long-delayed revenge, mistaken identity, love triangles, double-crosses and shoot-outs. We're well into the second hour of the movie before the plot becomes quite clear. These difficulties notwithstanding, "Once Upon a Time in the West" is good fun, especially if you like Leone's way of savoring the last morsel of every scene. A final shoot-out between Henry Fonda and Charles Bronson, for example, takes at least 15 minutes. They walk. They wait. They circle each other. They stare at each other. They squint. They spit. They take off their jackets. They wince. Just when they finally seem prepared to shoot after all, Leone uses a flashback. But why hurry a good shoot-out? Leone's first two "spaghetti Westerns" ("A Fistful of Dollars," "For a Few Dollars More") were made with small budgets. His third, "The Good, the Bad and the Ugly," was made with a few dollars more. But this one was bankrolled by Paramount and looks like it: There's a wealth of detail, a lot of extras, elaborate sets. There's a sense of the life of the West going on all around the action (and that sense is impossible to obtain on small budgets). Leone produces some interesting performances by casting against type. Henry Fonda is the bad guy for once in his career; Charles Bronson is impressively inscrutable as the mysterious good guy; and Jason Robards is a tough guy, believe it or not. Claudia Cardinale was a good choice for the woman, but Leone directs her too passively; in "Cartouche," she demonstrated a blood-and-thunder abandon that's lacking here.
Roger Ebert, Chicago Sun Times, June 6, 1969
This restored, full-length version of the Everest of the 1968 spaghetti western is a violent, poetic elegy that links a revenge story (Charles Bronson as a Mexican peon searching for his brother's killer) to the epic of the building of the transcontinental railroads. It's a Marxist saga of capitalist exploitation and the battle over natural resources in the west (from the great pre-credit sequence to the final shot, water is the dominant motif), but for once Leone jettisoned his customary cynicism. Henry Fonda, who later appeared in Leone's My Name Is Nobody, relishes his role as a ruthless killer; Jason Robards is on hand as a freewheeling outlaw; Claudia Cardinale is a touching heroine. Ennio Morricone's haunting score (written before the movie was made) is among his most elaborate and memorable.
Philip French, The Observer, 26 July 2009.

What you thought about Once Upon a Time in the West

While the majority of you scored the film Excellent or Good there were caveats. “I loved it - too long though. Some scenes were too slow, but the atmospherics were fabulous. I particularly liked the “amusing” music with a sudden silence heralding an event” was fairly reflective. Many reviewers commented on “the Enigmatic Bronson close ups” some considering them the “best scenes”, yet another commenting that the film was “good, but too many longueurs of Bronson”; another said that, it was “predictable – with too many scenes of eyes only” and “could have been an advert for Specsavers”; “an amazing film but too long! I don’t know how Claudia Cardinale managed to keep her false eye lashes on the whole time… Charles Bronson was fantastic”. One reviewer considered it “stately, bordering on funereal” but “magnificent”. “The pacing is relentless and gives the finale huge impact. Nice nods to High Noon, The Searchers amongst others. Bronson’s enigmatic features are a better fit than Eastwood’s would have been. Fonda superb and in my mind preferable in black hat. Great score”. There were no misgivings for some, with observations like “magnificent…an epic film from a great movie maker. Long lingering camera shots. The 2 and ¾ house went by very quickly”. “One Hellava fairy story. Wow – great story telling, brilliant locations, and superb performances from the stars – and ground breaking (literally) direction. Great choice” “Wonderful! Wonderful! Wonderful! I have seen it many times but it is a very special film and I love the music with its themes for the individual characters”. “Wonderful – Sergio Leone on a big screen”. “The ultimate western. Brilliant sound mix”. “Absolutely brilliant. I’ve seen it 4 times before and it is still captivating and immensely enjoyable – atmospheric, moving, with a good story told well and a bit of humour and mystery. Could not be better” “Excellent re-release of a classic Western. Good soundtrack/cinematography and outstanding performances”. “At last a proper film- great in every way”. “The music did it for me. Great movie too”. One very observant reviewer wanted to know “what happened to the hole in Charles Bronson’s shoulder and coat that miraculously healed and disappeared” and another wanted to know “How did they train the fly?” Other comments were “Epic, but also ridiculous. The train was as much of a lead as anyone”. “Really old fashioned. Far too long. And too slow. An incomprehensible story”. “Self-centred, not clear; a waste of good scenery and music”. “Self-indulgent directing, tediously long sequences and facial close ups. Perhaps somewhat dated. Lacked continuity”. “Mindlessly brutal”. “Too much gratuitous shooting for my taste. A weak plot that failed to hold my attention and too long”. “Would have been more effective if shorter”. “Shame about the sound cut out – but well recovered. The reworked edition was just too long; still a great film though”.