A fictional biography of Horikishi Jiro, designer of Japan's WWII Zero fighter plane, this film looks back at the turbulent dreams of flight, freedom and progress. Oscar nominated, Hayao Miyazaki is one of Japan's greatest animation directors. 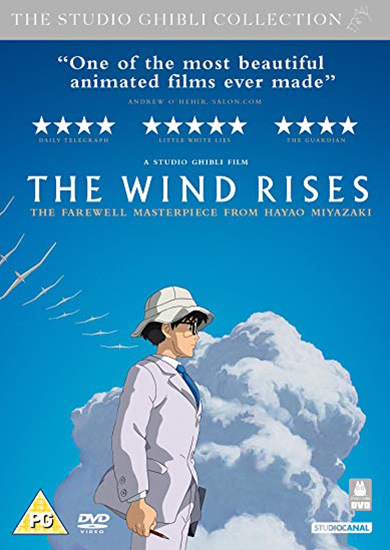 ‘The Wind Rises’ is said to be the ‘farewell’ animated feature from the Japanese master, now in his 70s. It is a beautiful film, a partly fictionalised biopic of a young Japanese aircraft designer in the run up to the Second World War. The film is, variously, a romance, a film about aeronautical engineering, a chronicle of illness and a poetic meditation on the nature of creativity. It has an extraordinary grace and delicacy, with a beguiling, mournful score which adds to the haunting nature of the story. Miyazaki’s main protagonist is Jiro Horikoshi, a real-life Japanese engineer, who designed the Zero plane, a fighter used by the Japanese navy. His inspiration and mentor is the great Italian aircraft designer, Count Gianni Caproni. They were kindred spirits and form a firm bond in Jiro’s reveries. The Italian is the sorcerer. The Japanese boy his apprentice. ‘The Wind Rises’ may seem like quintessentially Japanese subject matter but it reflects the pre-occupation of many cultures – from Thomas Mann, Paul Valéry and Jacques Prévert. The film has its share of perplexing moments, but is a film of startling formal beauty and marks a suitably rich exit for one of the giants of Japanese cinema.
Geoffrey Macnab The Independent 2014
Hayao Miyazaki’s final feature is a breathtaking dream of flying crafted with hand-drawn attention to detail – a rich treat for the eye and the soul alike. Inspired by the life of Second World War Zero fighter plane designer Jiro Horikoshi, this work plays out a vast and troubled historical canvas, the great earthquake of 1932, years of depression and the descent into war. Yet against such a bleak background, ambition and imagination take flight. Jiro meets the great Italian aeronautical designer and a career in engineering will give him wings. Triumphs and failures follow, including a heartbreaking love story. ‘The Wind Rises’ is a far more grown-up feature than its predecessors. The artwork is often joyous and jubilant, but there are weighty issues of conflict and destruction lurking just beyond the rims of Jiro’s spectacles.
Mark Kermode - Observer May 2014
Miyazaki Hayao Born in 1941, Miyazaki Hayao is a Japanese film director, animator, manga artist, producer and screenwriter. Through a career that has spanned six decades, Miyazaki has attained international acclaim as a master storyteller and maker of animated films. The success of his films has invited comparisons with American animator Walt Disney, British animator Nick Park and American director Steven Spielberg. He is considered one of the most popular and influential animators in world cinema. His was largely unknown in the West until the 1990s and the great success of ‘Spirited Away’ in 2001, the first animated film to win an American Academy Award.

What you thought about The Wind Rises

There was a high level of praise for Miyazaki’s ‘The Wind Rises’, announced as his last film. You enjoyed “the complexity and impact of a remarkable amalgamation of life-story, aeronautics, Japanese social life and a poignant story of love and loss”. Many of you were moved by its “beauty and poignancy” which, in the words of the final song, “left me soaring upwards”. It was a “wonderful film, told with such skill as the strands of Jiro’s life were portrayed”. The film was “so rich visually”, “lyrical” and “faultless” with the “skills of film animation taken to a striking new level”. There was “great insight and portrayal” in the picture of Japanese life “an illuminating window into the life of an erstwhile wartime enemy”. Several responses commented on the “fascinating perspective” of Japan’s relationship with Germany in the 1940s and the “dark shadow” behind Jiro’s great invention as an aircraft designer, contrasting his “energy and idealism” with preparations for war. Many of you were “deeply moved by and involved in the tender yet doomed love affair”, noting the “lyricism” and “captivating tenderness” of the newly –married couple. It was, one member concluded, “magical, subtle, moving and beautiful and puts Disney in the shade!” Another asked “How often do we see films about real engineering? – beautifully drawn, animated and sound-tracked”. Where there were reservations about the film they were mainly on the grounds of its length – “sagged in the middle”, “at least twenty minutes too long”, “too long and slow to engage the audience”. There was a view also that “it was a bit indulgent, more about the director than about story and character”. The direction and camera work were “too ponderous and lacked visual impact”, the film overall “beautiful, but a bit laboured”, “intriguing but distinctly ungripping in its impact”. Nonetheless, a strong response to, and appreciation of “the beauty and subtlety” of the film, a great tribute to Miyazaki, if this is indeed his farewell to film.