A feel good Oscar-winning film about backing singers who wanted to be stars, but didn’t quite make it. A movie bursting with life and music from the rock era, including Ray Charles, David Bowie, Sting and The Rolling Stones. 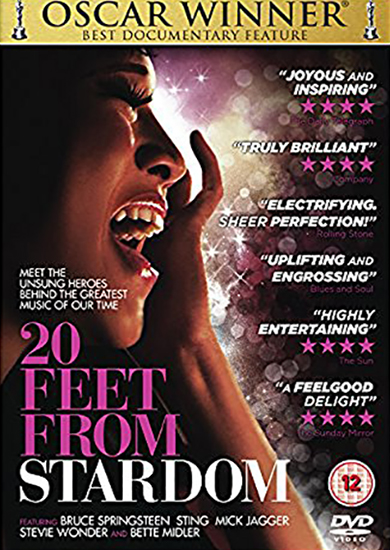 Such a great idea for a documentary and such a surprise to realise that it has never been done before. Morgan Neville’s Oscar-winning film is about backing singers who have lent their musical talents to many a star name’s pop record. Sometimes they have been acknowledged and appreciated, sometimes not. But once you accept the backing singer’s role it is very difficult to break out. Neville talks to the big players like Bruce Springsteen and Stevie Wonder and he savours their connoisseurship of the great backing singers and he speaks to the figures themselves, like Darlene Love, Tata Vega, Judith Hill and Lisa Fischer. It’s a movie bursting with life, with energy, with music and it also notes the personal and professional sadness of those backing singers who wanted to be stars but couldn’t make it. A thoroughly enjoyable movie, which ends on the feel-good possibility that a backing singer can sometimes find a place centre stage.
The Guardian March 2014
’20 Feet from Stardom’ – this year’s Oscar winner for best documentary – is rousing, upbeat fare, steeped in a sense of yearning and regret. It’s a celebration of back-up singers whose voices are heard on countless well-known songs, but who remain unknown to any but music-world insiders. It is as if they are held back by invisible strings. Few of them make the journey from the back of the stage to its centre. “That walk to the front is complicated” muses Bruce Springsteen, considering the anonymity that these singers both resent and half seem to relish. Many aspire to solo careers but can’t escape their place in the margins. The film is assembled in a random and impressionistic way, with no particular sense of chronology or structure. Most of his interviewees are female, African-American and come from a gospel background. They grew up singing in church choirs and associated religious music – one reason, it is suggested, why they are not pre-occupied with worldly success. We hear them, loud and clear, we see them sharing the stage, but we take no more notice of them than we do the shadows on the mixing desk or the guards on the stadium gates.
Geoffrey McNab. The Independent March 2014

What you thought about 20 Feet from Stardom

What you thought about ’20 Feet from Stardom’ Number of responses: 77 Excellent Good Average Poor Very Poor 28 (36%) 31 (40%) 13 (17%) 2 (3%) 3 (4%) Morgan Neville’s Oscar-winning documentary was received very well, as the figures show. You enjoyed “its upbeat exuberance”, “its joy in singing and performance” and the “personal and professional stories” its key figures – Darlene Love, Merry Clayton, Tata Vega and Judith Hill – had to tell. It was, many of you concluded, “a wonderful film”, ”fascinating in its insights”, “a film of great insight and different perspectives”, “full of pleasure all the way through”, “a great documentary, shedding so much light on so much talent”. The quality of “the superb research and presentation” was highly praised, along with “a deliberately non-narrative structure which took you into the heart of the world of professional musicians”. There was a positive response to “the warm and energetic personalities” of the central figures and the “rich social and personal histories” which their musical careers revealed. This “background richness” of Afro-American culture struck many of you as a central feature of the film’s appeal, proving “inspirational and moving” in its portrayal of the lives of women singers – “a moving homage to unsung heroines”, as one response aptly expressed it. It was, above all, a “very joyful film”, “exploding with life” and “full of amazing voices”. But, while finding the film enjoyable and the documentary structure interesting, there was a common strand of criticism that the film was “too long”, “too repetitive” and “at times lacking a central focus”. A number of responses were critical of both the structure of the film and its editing – or lack of it. The “central thesis of the film was well made but incessantly repeated”, “relying too much on some superb singing but not enough on structure”. For another member of the audience it was “too noisy, not enough variety” with “too many repetitive reflections” and “too bitty, with rather sad, frustrated stories” and on this negative spectrum “very laboured, repetitive and stupendously boring”. However, over 75% of the audience found the film “joyful”, “thoroughly enjoyable”, “mesmerising” with “amazing music”. There were, incidentally, seven separate references to the Spanish short, three positive and four negative.