A black and white, silent movie melodramatic twist on the Snow White fairy tale set in 1920s Seville and centred on a female bullfighter. A sumptuous and visually ravishing evocation of a bygone era. 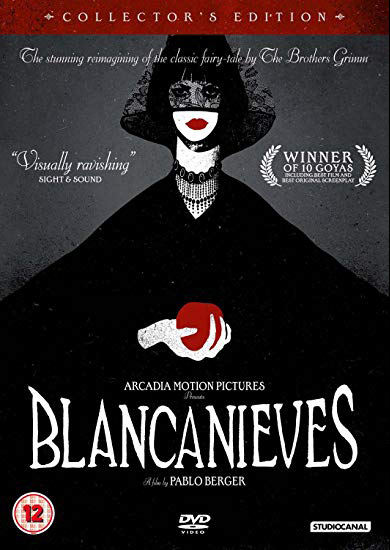 ‘Blancanieves’ will delight and amuse anyone who enjoys the Snow White story but who always felt it needed more bullfighting! This Iberian spin on the Snow White legend is a curio and a wonder; a silent fairy tale woven from the softest velvet. It is shot in black and white in the style of the great European directors who came early to Hollywood, but Berger is ploughing a gorgeous furrow of his own here with grotesquerie and a dash of S & M to froth things up. We are in Seville of the 1920s, the heroine, Carmencita, is the daughter of a famous bullfighter and a flamenco dancer. Her mother dies and her father’s new wife sends Carmen to live in a coal cellar, while she sinks her claws into the family estate. As Carmen grows older, the film aligns itself more closely with the Snow White story as we know it, but with some inspired deviations. This is a classic story retold in a way that is at once old and new: the very essence of timelessness.
Robbie Colin - Daily Telegraph 2013
This silent Spanish fairy-tale fantasia is a gloriously entertaining exploration of families, film history and Spanish folklore. Flamenco, torero, fiesta – from the 1950s onwards these were massively extolled by dictator General Franco, to sell the illusion of Spain as a happy, party-loving nation – and becoming clichés in the country’s cinematic imagination. Berger, the director, re-configures these stereotypes into a fantastically entertaining celebration / deprecation of all things Spanish. His aim is clear: to reflect in a nostalgia-free way on the country, its history and its traditions, through the prism of film. Carmencita is the newborn daughter of a celebrated matador; her mother, a singer and flamenco-dancer, dies in childbirth. Carmencita’s new power-crazed stepmother sends her to live with her grandmother. Later she is reunited with her father, who trains her in the craft of bullfighting – eventually the way she’ll honour his name.
BFI Film Review August 2013

What you thought about Blancanieves

Pablo Berger’s film, with its “highly original, dramatic and entertaining” use of black and white film conventions made, for the great majority of the audience, “a highly absorbing evening”. There was praise for the treatment of the original fairy story and its Spanish dimensions: “beautiful storytelling, compelling action”, “very dark and dramatic but highly involving”, “courageous, direct, with an ending true to the spirit of the piece”. There was a recognition and enjoyment of the key elements of fairy-tale, “the wicked stepmother, the courage of outsiders against the odds, wickedness getting its just deserts and the radiant innocence of Blancanieves herself”. You felt the film was “both clever and charming” and “full of tension and excitement”, giving a familiar tale “a strong dimension of the unexpected” while being “artfully put together and arresting in its impact”. Several responses warmed to the “potent juxtaposition of sadness and great fun” and the “thoroughly engaging twists on the original story, with the traditions of Spain”. Some found, too, “a mix of melancholy, with fiesta and flamenco” created “hugely enjoyable cinema”. There was great appreciation for the “excellent music” in many responses, and the way it complemented a variety of moods: “poignant, funny, malevolent, cruel, all the constituents of fairy tale”. Several responses praised the cinematography, and its “subtleties of lighting and camera angles and points of view” and some remarkable, larger-than-life performances, particularly from Maribel Verdu as the wicked stepmother. There was barely a note of dissent from the enjoyment of “this cleverly crafted fantasy”, except that, for some, the film was “too long and rather slow”.