Travelling through Italy, a Russian poet haunted by visions of his homeland meets a hermit who claims he knows the secret of human salvation. Tarkowsky, the late great Russian film-maker, won Best Director at Cannes for this visual masterpiece. 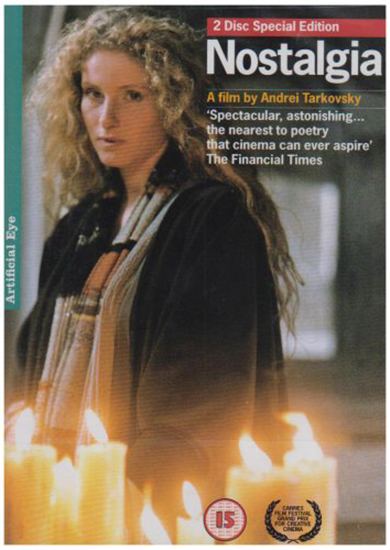 This meditative film takes the viewers into a mysterious, mystical world and envelops them. Gorchakov is a Soviet architect, professor and poet who travels into the Tuscan hills to research the life of an exiled 18thC Russian composer. Away from his homeland, he is haunted by an unfulfilled desire to return to a home that is just out of reach. He becomes involved with his strong-minded, attractive interpreter, but the relationship gradually deteriorates, particularly with Gorchakov’s growing friendship with Domenico, a bizarre Italian professor who years ago locked himself and his family away, to await Armageddon. Domenico, who lives in an ancient crumbling structure, has a crazy belief that, to save mankind, he must wade across a bath in this crumbling 16thC spa holding a candle which he must not allow to be extinguished. Gorchakov finds himself deeply involved with what appears to be this deranged quest. The final sequence of ‘Nostalgia’ is one of the most captivating ever put on film. The viewer is swept away by Tarkovsky’s atmospheric and memorable creation of unsettling mists and eternally damp walls, where elements of fire and water reign supreme. After seeing ‘Nostalgia’ the feeling is of utter relaxation that makes one long for the world created in the cinema.
TV Movie Guide - 2003
Tarkovsky wanted ‘Nostalgia’, his first film after leaving Russia to escape censorship, to explore the nostalgia which assails the exile far from his homeland. He has created a deeply inward-facing film which attempts to “see into the universe within the man”. Gorchakov’s feelings – his nostalgia, his aversion to the modern world, his search for meaning – are subtly and sensitively conveyed through landscape, sepia tones and slowed down memory sequences. The slow pace of Tarkovsky’s films has challenged audiences, but the key is to tune into Tarkovsky’s expansive, if transcendental, wavelength to explore the slow zooms that, combined with lighting effects, reveal a new kind of atmospheric filming. ‘Nostalgia’ is probably Tarkovsky’s most personal film – about leaving Russia and leaving his family – but one which is full of allegorical and metaphorical opportunities, which leave it wide open for interpretation.
Slant Magazine - 2013
Andrei Tarkovsky (or Tarkowsky) (1932-1986), was a Soviet and Russian film-maker, writer and film editor. He directed the first five of his feature films in the Soviet Union, his last two films ‘Nostalgia’ and ‘The Sacrifice’ in Italy and Sweden. His work is characterised by spirituality and metaphysical themes, a lack of a conventional dramatic structure and a distinctive personal cinematography. Ingmar Bergman said of him “He has invented a new language, which captures life as a reflection, like a dream.”

What you thought about Nostalgia

For the first time this season, critical and disappointed responses far outweighed praise and many of you found little to respond to or enjoy in Andrei Tarkovsky’s “puzzling, mysterious but ultimately inconclusive” film. The main critical feeling was that while “offering occasionally startlingly beautiful and evocative images”, the film was “rambling, impenetrable and incoherent” with “no strong unifying elements” of “character or story”. For many of you “the significance of events and actions was not directed or organised” so “there was no controlling purpose” to some “undeniably beautiful sequences”. Also, many of you found the pace of the film was “far too slow, with brooding silences that took the audience no further”, leaving only “confusion, lack of clarity and a sense of frustration” in the mind of the viewer. There was a strong feeling too that the “overt and heavy symbolism of fire and water” was “hackneyed, pseudo-portentous but finally without any meaning, too private to the director”, and not communicated to the audience. It was, for some in the audience, difficult to sit through – “it went on and on and on” – and even then the perseverance was not justified, leaving the feeling, for one viewer, of “pretentious and self-indulgent film-making”. It was, for another in the audience “soporific, strangely mesmeric, but ultimately mad”, and another found a bewildering mixture of “life, death, ecclesiastical symbolism but finally any meaning eluded me”. The “turgid solemnity” and “ponderous symbolism” alienated one member; others found the accompanying music (Verdi and Beethoven) and a well-trained dog the only features of merit. This catalogue of criticism was not the whole picture, however. There was appreciation of “stunning locations and excellent cinematography, with every frame like a carefully composed painting” and of the “mesmerising and powerful flow of beautiful images”. Several responded positively to the “challenging style” and “compelling atmosphere of a series of set-pieces” and to a “distinctive style and sense of pain and loss in the exiled poet”. One member felt that the film began with “a strong expectation of narrative, but then lapsed into incomprehension”. A final comment about “lyrical and disturbing images” with “such distressing disconnection”, led one member to wonder, perhaps along with many others, whether the whole enterprise “had been worth the candle!”