Lift to the Gallows 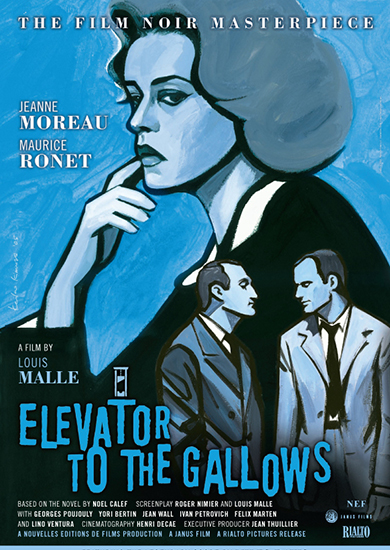 Two years before ‘Breathless’, before Godard was talking about needing a girl and a gun, 26 year old Louis Malle unveiled this brash début: a brilliant, preposterous slice of noir-suspense realism and Highsmithian mistaken identity. It is imbued with the poetry of romantic despair, mostly voiced directly into the camera by Jeanne Moreau – a captivating kind of choric-fatale with dark sensuous shadows under the eyes. She is a wealthy married woman, Mme Florence Cabala, who, in this era when capital punishment (the scaffold) was very much on France’s statute book, hatches the imperfect crime with her lover, ex-paratrooper Julien. Chaotically, their paths cross with gamine florist’s assistant, Véronique, and her teen boyfriend. They are the younger generation contemptuous of their elders’ behaviour during the occupation but apparently just as cynical and greedy. It all ends in violence with a cop on their trail, but what a supremely stylish and watchable picture it is.

She loves him “Je t’aime, je t’aime”, she repeats into the telephone, in the desperate close-up that opens the movie. He needs to know this as he is going to commit murder for them. The woman is Jeanne Moreau, playing Florence, the wife of a millionaire arms dealer. Her lover, Julien, is a paratrooper who served in Indochina and Algeria in wars that made the arms dealer rich. He works for Cabala (the husband) and, with access and motive, must make this the perfect crime. Malle devotes loving care to the details of the murder – an elegant Locked Room Mystery. Stupidly, Julien leaves evidence behind, hurries back to the office, gets into a lift; but the power is shut off for the night and he is trapped between floors. Florence, meanwhile, waits where they had planned their rendezvous. And, in a series of shots that became famous, walks the streets, visiting all their usual haunts, looking for the lover she thinks has deserted her. Moreau plays these scenes with a kind of masochistic despair; it rains and she wanders drenched in the night. The improvised jazz score by Miles Davis seems to belong to the night as much as she does. This is one of the great French crime films of the 1950s, using the same style as Truffaut in ‘Jules and Jim’ and Godard in ‘Breathless’. ‘Lift to the Gallows’ could be called the first New Wave title.

Louis Malle 1932-1995 French film director, screenwriter and producer Malle was nominated multiple times for Academy Awards later in his career, but won the Palme d’Or for best documentary ‘Le Monde du Silence’ 1958. Other famous films are: ‘Les Amants’ 1958, ‘Zazie dans le Metro’ 1960, ‘Le Feu Follet’ 1963. Malle is associated with the nouvel vague, sharing many characteristics with Godard, Truffaut, Rohmer and others. He later moved to the USA and directed many films there, including ‘Au Revoir les Enfants’ 1987.

What you thought about Lift to the Gallows

‘Lift to the Gallows’ was generally well-received and the central question with “classics of the genre” – do they stand the test of time? – was mostly answered in a positive and appreciative way. Members responded to the “growing dramatic tension”, “the very evocative sense of Paris” and the “black sense of despair in the dark and the rain”. For some the film maintained “a gripping and involving sense of drama” throughout, although some, conversely, felt “a good idea was spoilt by being too long-drawn-out”.

Responses were divided as to whether events were “full of surprising twists” or “too predictable”. The “evocative atmosphere” and the “sense of the 1950s” were sources of enjoyment”, as were the “stylish camerawork”, “use of close-ups and lighting” and the “powerful and haunting performance of Jeanne Moreau”. Despite differences of opinion about the film’s overall quality, there was no doubt about the power and impact of the Miles Davis score. The film was perceived as a “worthwhile inclusion” in the film society’s programme.