Gloria is an entertaining study of a feisty, freespirited 58 year old divorcee searching for passion, companionship and a partner who shares her zeal for dance. Chile’s foreign language Oscar entry. 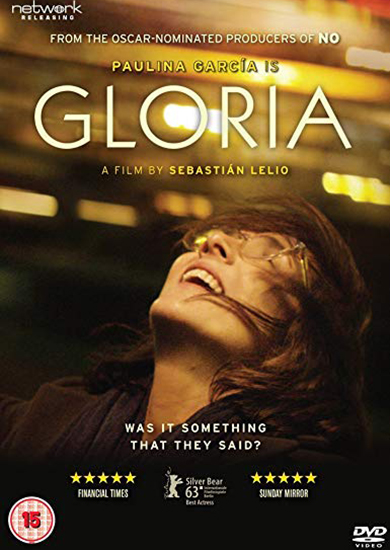 ‘Gloria’ a fresh and exciting new film from Chile, a full-frontal insight into post-divorce relationships, won Paulina García the Best Actress Award at the Berlin Film Festival in 2103. It is gloriously strange and slippery, difficult to pin down, at once funny, uplifting, moving and deeply disquieting. What it’s not, is parochial: Lelio, the director, explores the ties that strangle in all relationships. Gloria’s new lover is smothered by pathetic daughters; our heroine is hobbled by an over-functional family and, perhaps, a thirst for irrationality that is stronger than her hankering after companionship. Both director and star create an enigmatic mysteriousness, which creates a fascinating, strange, complicated but energetic and uplifting film.

This film is a perceptive and entertaining study of a free-spirited 58 year old divorcee, putting aside the pain of past relationships in her search for passion, companionship and a partner who shares her zeal for dance. Gloria, divorced for over a decade, is single and lonely, but refuses to give up. The plethora of songs and music that underscore the film’s action position Gloria’s adventures within a litany of tales of emotional survival in the aftermath of romantic heartbreak. The film’s pulse comes in many ways from Paulina García’s brave and beautiful central performance. She dominates the movie from the very beginning. She is present in every frame and Lelio shapes the film to ensure that the viewer is given the sense of entering her world. Her large round glasses that frame slanting, expressive eyes have something of a 1970s feel. Her positive outlook and willingness to try anything – including bungee-jumping and marijuana – generate Rodolfo’s pick-up line, “Are you always this happy?” ‘Gloria’ is also a film about ageing and about managing the changes it brings. Rodolfo has a sagging waistline; Gloria must take action about glaucoma. The film’s strength is that it operates both as a compelling character study and as a wider contemplation of the state of the nation – scenes of protest on the TV, crowds of protesters in the Santiago streets – as Chile moves from a dying dictatorship into a more pliable democratic model. Overall, the film operates with an admirable visual economy, at the centre of which is Gloria herself, dancing to her own rhythm – passionate, fearless and, like Lelio’s film, eloquently uplifting.

What you thought about Gloria

Sebastián Lelio’s Chilean film ‘Gloria’ had a broadly favourable yet divided response from the audience. It was “refreshing and daring to have the life and loves of an older woman portrayed” commented one viewer, “albeit with some painful moments”. Many responses warmed to the “energy and positive qualities of the central character, Gloria”, and to the film’s “honesty and emotional worth”. There was admiration for Gloria’s “generosity, simplicity and kindness” and respect for her “independence and spirited lifestyle”. The film was “brilliantly crafted” in the way it showed Gloria “seeking a life of feeling and involvement” beyond her work and her grown-up family. For several in the audience, the “painfully true” situations in Gloria’s life carried “conviction and feeling” which was “life-affirming and courageous”, and the result of a “powerful and compelling performance by Paulina Garciá, as Gloria, whose face was “superbly expressive throughout, an emotional tour de force”. Some responses found the “brilliant acting” not so much uplifting as a “powerful evocation of desperation, observed and portrayed with great skill”. There was an appreciation too, of the “ambivalence of family ties” and how children can be “selfish and limiting” in what they regard as “proper and suitable parental behaviour”. Some in the audience confessed to being “a little uncomfortable with some of the graphic sex scenes” but felt that the film was “brave and honest in its portrayal”. It was, concluded one viewer, “a superb portrayal of the hard knocks, experienced by a warm if naïve woman” and “the perseverance and optimism of Gloria are a fantastic example to all” and she was “a true heroine”. Some responses were more critical, while recognising some very good acting. There was the sense that the film was “slow in pace” “lost focus for long periods” and “took too long to make some simple points”. The portrayal of a “desperate woman” lacked focus and was unresolved, leaving the film “rather predictable and rather dull”. The basic storyline for one viewer was “too weak to be interesting”; another found it “impossible to sympathise with the central character” but “enjoyed the portrayal of the tensions of family life”. The main complaint from those who did not enjoy the film was that it was “dull”, “depressing”, “boring” and “failed to amuse or entertain”.