The Extraordinary Adventures of Adèle Blanc-Sec

Intrepid authoress Adèle Blanc-Sec braves ancient Egyptian tombs to locate a doctor and get him back to Paris to cure her sister. Add in a very active pterodactyl, would-be suitors, cops, and other distractions, this is a narratively unusual and outlandishly entertaining romp. 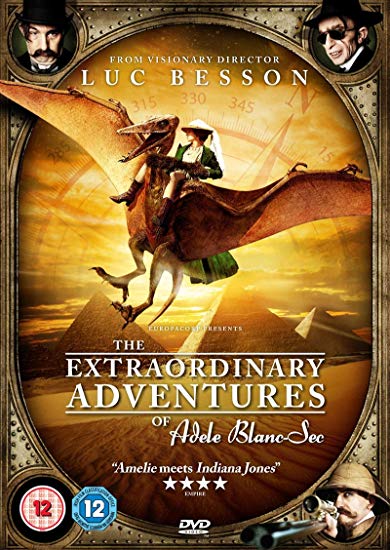 Here is Luc Besson with a slick multiplex adventure fantasy featuring a gusty Indiana Jones-style heroine from turn-of-the-last-century Paris – proving that anything Hollywood can do, he can do, with buckets more visual flair. Adapted from a popular French comic book series, Louise Bourgoin gives a star-making performance as swashbuckling novelist Adèle. The movie is a gorgeous spectacle, less saccharine than anything Hollywood is turning out and hyperactively plotted. Played with a breezy charm, Adèle is a feisty, unflappable and brilliantly caustic heroine. The plot finds her in Egypt, turned tomb-raider to find the mummy of a famed ancient doctor. If Adèle’s scientific friend can bring him back to life, then this mummy may be able to cure her sister – languishing in a coma after a freak accident. Back in fin-de-siècle Paris, Adèle’s scientist tests his technique on a dinosaur egg, wreaking mayhem on the city. There’s a lot to enjoy in this frantic farce, all played with a note of droll flippancy – all style and panache.
Cath Clarke Time Out 2011
Luc Besson’s ripping adventure yarn coasts by on a waft of burlesque acting and droll good humour, with each episode metaphorically framed by quotation marks. All this is fun, full of thrills and spills, although we do wonder where Besson is leading us! In the meantime, it’s Paris 1912. There’s a tandoori coloured pterodactyl sweeping over the Jardin du Luxembourg and a gaggle of mummies outside the Louvre. Enter, intrepid tomb-raider Adèle Blanc-Sec, in an array of resplendent bonnets that she only discards in a series of disguises. Adèle wants to cure her invalid sister; she wants to ride the tandoori pterodactyl – bobbing throughout the film from one ravishing set piece to the next.
Xan Brooks The Guardian 2011

What you thought about The Extraordinary Adventures of Adèle Blanc-Sec

There was a substantial degree of pleasure in the responses to Luc Besson’s “energetic and amusing antidote to November gloom”. The qualities of “exuberance” and “entertainment” ranked highly, along with “a terrific mix of humour, anarchy, history and imagination”. Some responses felt the film captured “the drama and pace of the comic-book original” with lots of “sardonic humour, both of character and situation”. Albeit “a bizarre world”, it was presented with “wit, flair, style and imagination” and with “a dashing pace, which carried you through the absurdities of the action”. You felt that the film “cleverly avoided the slapstick”, offering a “brilliant blend of action, humour and a dig at establishment attitudes”. “Exciting storytelling” was combined with “such sharp humour” making for a “delightful romp, with panache and parody of some stale adventure clichés”. There was admiration for “excellent acting from Louise Bourgoin as Adèle” and the “heroic spirit of the feminist lead” combined with “convincing period detail, used for good comic effect”. Again, “excellent dialogue and some great caustic one-liners” made the “escapist farce amusing and believable”. All in all, for those who enjoyed it, “a firework display of crazy, extraordinary filming”. But, there were dissenting views. It was considered “macabre, with too few jokes, but Adèle saved the day” and “far-fetched and ridiculous, although amusing”, “very strange and very silly”, “too over the top” and “not very subtle”. It was “funny in parts, but failed to hold the attention”. In a more critical perspective, it was “dreadful” and “not nearly as funny as it thought it was”. Nevertheless, for the majority who responded, it was a great celebration of fun and joie de vivre.