A little girl, Mui, is sent as a servant to a house, where the mother still mourns the death of her daughter. 10 years later Mui (now a young woman) is sent to work for a young pianist and his wife. An exquisitely beautiful and lyrical film, nominated for an Oscar in 1994. 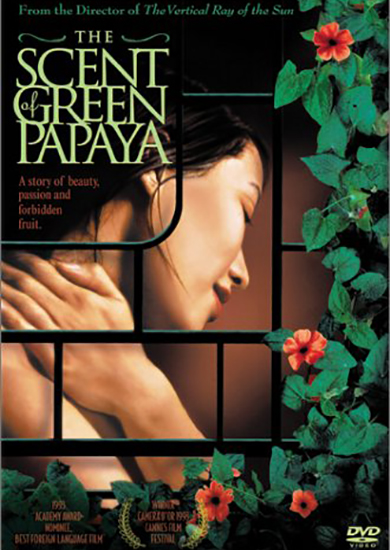 ‘The Scent of Green Papaya’ is a tranquilly beautiful film about a lost Vietnam, a peaceful orderly place not yet touched by wartime. Into a family, with its own troubles and histories, in Saigon, in 1951, comes Mùi, a lovely ten year old servant girl. The camera watches Mùi contemplatively as she learns her new duties and does her hard-working best. Despite Mùi’s status as a servant, she manages to enjoy a life of more constancy and quiet joy than do those around her. The film chronicles the series of small changes that re-arrange the life of the family, while sustaining the rhythm of womanly work which shapes Mùi’s existence. ‘The Scent of Green Papaya’ with its haunting visual loveliness, takes its title from a vivid childhood memory of the director, but it provides a strong metaphor as it blossoms into a fruit. Mùi herself follows a similar evolution. During the latter part of the film Mùi, a quiet, graceful 20 year old, becomes a devoted servant to the handsome musician she has gazed at admiringly since her childhood. This musician, seen at his Steinway playing Gershwin, is a part of a world Mùi has barely seen before. The film is a luxuriant, visually seductive debut for Tran Anh Hung, so wordlessly evocative that it barely needs dialogue. Reaching into the past for its precisely drawn memories, it casts a rich delicate spell.
New York Times October 1994
This film is so placid and filled with sweetness it is like listening to soothing music. It takes place in Vietnam between the late 1940s and early 1960s and is seen through the eyes of a young girl, taken as a servant into the household of a merchant family. We understand the workings of the household only through her eyes. We see the father drinks, that the mother runs the business and the family. We see unhappiness and we see that the mother comes to think of Mùi with a special love – she is like a daughter. As Mùi grows and the family’s fortunes fade, the routines in the household continue unchanged. Then Mùi is sent to work as the servant of a young man who is a friend of the family, whom she has known for a long time, but now a sleek sophisticated man, a classical pianist. She serves him as she served her first family, quietly and perfectly. And we see, through small signs, that she loves him. This is a placid, interior, contemplative film not plot-driven but centred on the growth of a young woman. It is like a piece of music, made of subtleties that grow deeper as the film progresses. This is a film to cherish.
Roger Ebert. Movie Review 1994

A considerable number of responses showed great pleasure in the visual qualities of the film. Descriptions such as “beautiful”, “evocative”,” delightful”, “visually remarkable”, “mesmerising”, “excellent use of close-ups” were there in abundance. Alongside the visual impact was a sense of atmosphere and tranquillity, which was seen as part of the “subtle texture of everyday life”. The film was “gentle”, “emotional”, “deeply felt”, “soothing with its visual poetry”, “timeless” and “charming in its certainties and continuities”. While for several members of the audience “the images spoke for themselves”, there was also praise for the quality of the sound track which “enhanced and clarified the emotional tone of the events portrayed”. Several of you were moved by the portrayal of the “silent inwardness of Mùi” which gave the film “a solid emotional basis”. But while pleasing many in the audience, and without denying its visual beauties and impact, the film raised some uneasy questions for some. Was the director endorsing a quiescent subordination for young illiterate girls? Was it enough to provide a fairytale happy ending to the young musician? Why were all the male characters inadequate and deeply unpleasant? There was a view, too, that a film needed more action and character and that clever camera work was not enough to carry the film. For some in the audience this made it “too slow to the point of boredom” and “self-indulgent and soporific”. There was no doubt that the majority of responses found much to praise in the film, but as is so often the case, the film raised questions and issues for some and its beautiful and sensitive filming was not to everyone’s taste.