This charming film is set in bustling, teeming Mumbai. A mistaken delivery of a lunch box is the start of a relationship between two strangers, a grouchy widower and an isolated housewife. A delicately portrayed and delicious love story. 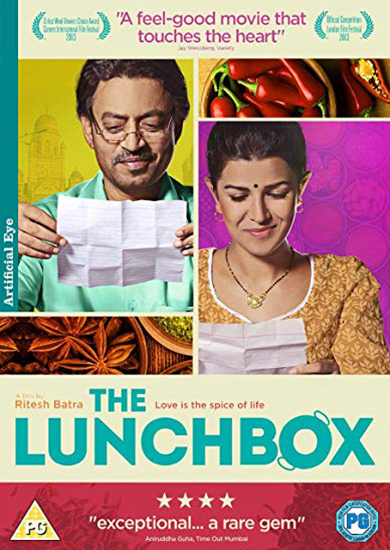 This gentle romantic drama packs twenty minutes of action into its hour and three quarters’ running time. The story involves Ila, a neglected young housewife and mother in Mumbai, who begins an epistolary affair with Saajan, a widowed elderly accountant, when a messenger mistakenly delivers to him the lunches she has lovingly prepared for her husband. Saajan, on the verge of retirement, is saddled with the training of his eager successor, Shaikh, who, in turn, tries to coax the grieving, life-worn introvert out of his shell. Batra’s poised observational direction gets much mileage from his actors’ gazes, shading the sentimental mist with unspoken misery. Yet his loving attention to local customs, and the very lunch-delivery network on which the story runs, involving Saajan’s white-collar workplace and extending into transport systems which bind the city together, give a subtle and ornamental backdrop for a gently developed tale.
Richard Brody The New Yorker 2014
Already a huge success in its native India, this Mumbai-set romance arranges a tender marriage of ‘Brief Encounter’ with ‘The Shop around the Corner’. Saajan, an ageing office drone, finds the wrong lunchbox delivered to his desk and stumbles into a chaste relationship with Nimrat Kaur’s unhappy housewife, Ila. Before long, this pair will learn the values of ‘crossed wires’ and missed connections and how “the wrong train can get you to the right station”. ‘The Lunchbox’ is perfectly handled and beautifully acted; a quiet storm of banked emotions. I loved the bittersweet scenes of Saajan clinging to the handrails of the crowded commuter car or smoking on the terrace of his home at night, like the loneliest figure this side of an Edward Hopper painting.
Time Out 2014

What you thought about The Lunchbox

Ritesh Batra’s film ‘The Lunchbox’ with its “gentle, bittersweet romance” gave a great deal of pleasure to the audience. Many of you found that the film was “sensitively and subtly directed with exceptionally fine acting”, “very moving in its poignant portrayal of loneliness in the modern city”. You admired “the director’s courage to allow events to proceed at their own pace” and the “imaginative and perceptive development of character during the film”. There was also the sense of “a window into a different modern society” and one member remarked from recent experience of life in India that it was “typical, accurate and captured Indian life”. Some in the audience were “spellbound by the skill in portraying the flowering of love without a meeting” and the way in which the experience was “shaped and surrounded by food and the lunchbox itself” and the “comfort and delight in making the food”. Part of the pleasure in the film was “its unexpected directions and the mix of melancholy and happiness” with a sense too of “lovely peacefulness despite the sadness”. The film was felt by many of you to be “extremely thought-provoking and emotionally involving, very sad, very happy, it had everything”. It was “gentle, beautiful and wistful, with an ending to discuss and debate”. The ending divided opinion somewhat. The majority felt that the “sadness and poignancy” of the ending was “exactly right” particularly as the film “insisted on the realities of growing old”. Another view was that the ending was “too inconclusive for our expectations” and left the audience too much in the air, despite all the “atmosphere and observation”. Indeed, the disappointment for some in the audience with the “lack of a resolved conclusion” was the only criticism made of the “beautiful, enchanting and profoundly observed film”. There were a number of appreciative comments, too, for the short “From Trike to Bike” from the Yorkshire Film Archive. It was “a brief glimpse into the pleasures and innocence of childhood”, “a very pleasurable reminder of the world we have lost” and “a rich and cleverly compiled montage of cycling, landscape and memory”.