Elliot Gould stars as wise-cracking detective Philip Marlowe, who tries to help a friend who is accused of murdering his wife. A hidden gem of 70's crime cinema by the late Robert Altman. 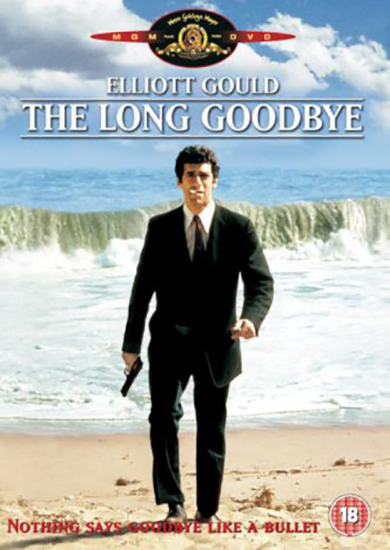 Like Raymond Chandler, on whose 1953 novel of the same title this movie is based, Robert Altman was a brilliant, difficult, maverick director who achieved success late in his life. The movie centres upon the knight-errant private eye, Philip Marlowe, going down the mean streets of Los Angeles to defend the reputation of his friend accused of murdering his wife. As played by Elliott Gould, Marlowe is a quizzical, self-mocking figure, constantly commenting on the world, trying to make sense of its amorality, decadence and lack of values, where everyone seems trapped in a vacuum of nostalgia and illusions about the past. Superbly photographed, in a desaturated colour that echoes a bygone age, ‘The Long Goodbye’ is an elegant, chilly, deliberately heartless movie. A masterpiece, it digs below the surface of the supposedly liberated spirit of the times, to expose the ethos that took America into the Vietnam War and produced Watergate. In pushing the cynical idealist Marlowe over the edge, it ends up true to the spirit of probably Raymond Chandler’s best novel.

‘The Long Goodbye’ takes characters out of Chandler’s novel and, in a very interesting way, stews them together to make a specific genre – the private eye movie. Altman understands that the private-eye fiction device was essentially a way to open doors as a hook for a cynical morality. Altman knows we don’t need plot, but identify with the way characters spar with each other. There is the added twist of making Philip Marlowe not just a cool professional but a 1950s anachronism. The story involves a murder, a missing person, an alcoholic writer, a bewitching blond and some gangsters. In the middle of this is Elliott Gould, as the chain-smoking, mumbling, disorganised Marlowe. It’s a virtuoso performance – Gould has enough of the paranoid in his acting style to give a real presence to Altman’s revised view of the private eye. Each scene is directed by Altman, to tell a taut story. The movie has a hard boiled desperation to it which feels as though it really belongs to a private eye’s life.

Roger Altman (1925-2006), film director, was five times nominee for the Academy Award for Best Director and an enduring figure from the New Hollywood era. Considered a maverick, with his highly naturalistic films, his style was unique. His subjects covered most genres, but with a subversive twist, relying on satire and humour to express his personal vision. He was a non-conformist in themes and directing styles and actors especially enjoyed working under his direction. Through his camera work and innovations in recording dialogue, he produced a more natural, more dynamic and more complex experience for the viewers. His most famous films are ‘Mash’ (1970), ‘McCabe and Mrs Miller’ (1971) and ‘Nashville’ (1975).

What you thought about The Long Goodbye

The audience found plenty to enjoy and engage with in Robert Altman’s “dark and devious” film version of Raymond Chandler’s ‘The Long Goodbye’. It had “great acting, great atmosphere, a compelling tale of deceit and brutality”. The figure of Marlowe was a “powerful dweller in the mean and corrupt streets”, in a world which “captured the blowsy and brutal essence of Chandler’s world”. The sense that Marlowe was the “only virtuous and decent man” gave the film “a moral centre” “amidst dangerous, violent but, at times, blackly comic events”. The narrative itself was “grippingly dramatic, with the power to shock” with “excellent and adventurous camera work to reflect the confusions and deceptions of the plot”. The quality of Elliott Gould’s acting was highly praised in many responses for its “sense of originality, creating a distinct, idiosyncratic personality in a dark and unpleasant world”, a “bravura performance”, “charismatic and compelling after 40 years”. Several in the audience commented on the appeal of the “traditional American crime film” – “fast action, fast plot, fast cars, bad money, betrayed friendship” and there was considerable appreciation of the film as a “classic of the genre”. There remained an additional pleasure for many of you – the remarkable cat in the opening sequences. There were, however, some critical perspectives on the film, not least the difficult sound quality in some of the dialogue. Alongside the poor sound, several commented that they found the action “disjointed and confusing” with “too many bizarre characters”, “the plot too thin” and the “ending unsatisfying”. “Quirky humour” was not enough for one member “to compensate for shallow characterisation”. In another response there was praise for the “mordant social criticism” but “the film overall was too dark and anarchic to carry its message properly”. Despite “striking scenes and twists”, the film “lacked a central strength, so it was difficult to relate to”. As often, and as we would expect, a mixed but broadly positive set of responses to a memorable film, distinguished by some fine acting, a scene-stealing cat and a chain-smoking hero with an original match trick!