Clint Eastwood directs and stars as a toughminded, unhappy old man who can't get along with anyone. He is a war veteran whose prize possession is a mint condition 1972 Gran Torino. When Thao, a young Hmong teenager involved in a gang, tries to steal the car, Kowalski sets out to reform the youth. A bittersweet and superbly made story of humanity and friendship. 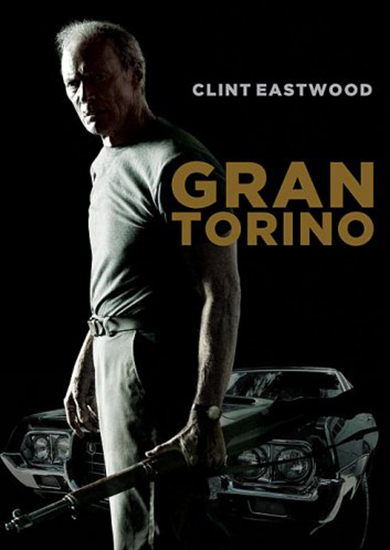 The Gran Torino model here is vintage 1972 and its owner’s glory days – widower, car-worker, military veteran and American patriot, played with grandstanding gusto and star quality by Clint Eastwood, who also directs and produces – date from the same era. We join the story as the ageing Walt has just lost his wife and has to endure the insolence and lack of respect displayed by his smug grown-up sons, both foreign car owners. Walt is a racist; he is a resenter of gooks, spooks, mooks, all mentally lumped together with all the local criminals around town who are undermining decent values. The political becomes personal when Thao, a shy bookish teenage boy who lives next door, is bullied by his thuggish cousin to join a gang. The initiation test is to bust into Walt’s garage and steal his treasured Gran Torino. The meeting of Walt and Thao is to change both their lives. Eastwood’s performance as Walt is a treat. No-one could have animated the role like this and no-one else would have got away with the reactionary arias and bigoted broadsides. He carries off the essentially comic combinations of elderly mannerisms and cowboy menace. Like its hero, this movie is a sentimental softie under its tough guy persona. Walt puts away his harsh attitudes to minorities and becomes a better person. This is an enjoyably big brash macho melodrama, distinguished by Eastwood’s cracking performance. As it is almost certainly Clint Eastwood’s final acting appearance, ‘Gran Torino’ is a must-see on that account, if nothing else.
Peter Bradshaw - The Guardian February 2009
There is speculation that ‘Gran Torino’ is Clint Eastwood’s final role as an actor. If so, he’s struck 24 carat gold in this film, as disgruntled Walt Kowalski, decorated Korean War veteran and retired car worker at the Ford plant where he helped assemble the now-classic car he keeps in pristine condition in his garage. He considers the run down Detroit neighbourhood blighted by an influx of immigrants – in reality, as betrayed by the promise of the American dream as he has been. The mild-mannered teenager next door is coerced into stealing Walt’s car by an Asian gang of thugs. That is when they find that Walt has a loaded rifle and is as mean and tough as a man can be. Walt has an extensive vocabulary of racial slurs and epithets and is not afraid to hurl them indiscriminately but Eastwood keeps himself tightly in check, never allowing Walt to slip into anything close to nice. He is so awful and outrageous, he’s the most fascinating misanthrope on screen for many a year. In lesser hands this could have dwindled into comedy or sentimentality. But Eastwood the actor grabs you with his first growl and has you between his clenched teeth for the duration. Eastwood the director shapes the picture with meticulous and acutely observed execution.
Empire Movie Review 2009

What you thought about Gran Torino

There was overwhelming praise for and pleasure in our first film of the new season, Clint Eastwood’s ‘Gran Torino’. Many of you were “held and absorbed” by “the slow burning development of profound emotional feelings”. It was “a superlative and subtle” film, which “held the audience silent even after the final credits”. There was no doubt in the audience that Eastwood’s own performance was “brilliant”, “outstanding”, “finely balanced and developed”, “emotionally austere and hence deeply moving”. But, in addition to his own performance, Clint Eastwood was praised for his “skill, economy and originality” as a director. The “meticulous attention to detail” the “avoidance of the strident or melodramatic” was felt by many of you to be a real directing achievement, particularly when accompanied by “sharp and mocking satirical humour”. The tension in the film as situations developed was perceived as “taut, subtle and true to life”, enabling the audience “to be absorbed in action and its consequences”. The “clashing cultures” at the heart of the film were “carefully, sensitively and humorously explored” as was the notion of the “tough guy American” with its long film tradition. Several responses commented on the “frightening portrayal of gang culture” in its “ruthless nihilism” and “vicious bullying”. Many responses also used the phrase “thought-provoking”, which paid tribute to the film’s portrayal of the complex social patterns in contemporary American life. The film was for many “touching and truthful”, “an old-fashioned movie of the best kind”. Some minor criticisms were made: that Walt’s sons and their spoilt, selfish children were somewhat of a caricature and lacked credibility. In addition there were some issues with the quality and audibility of the sound in the film. But there was no doubting the pleasure in the film as a whole. As one member put it “You can’t beat Clint, being Clint, directed by Clint – what a combination!” and your responses clearly endorse that conclusion.