The true and extraordinary story of an 84 year-old Kenyan villager and ex-Mau Mau freedom fighter who defends his right to go to school for the first time to get the education he could never afford. You're never too old to learn! 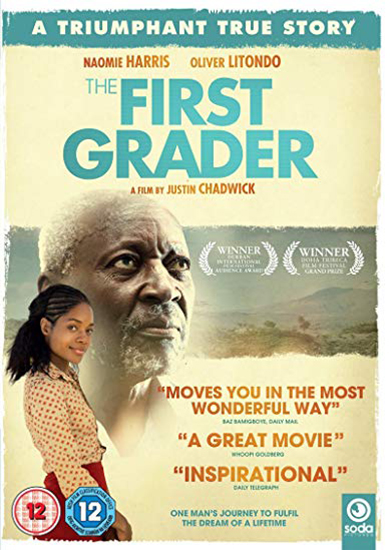 ‘The First Grader’ is based on a true story. In 2003, an illiterate 84 year old Kenyan, named Kimani Ng’ang’a Maruge, hearing a promise of free education for all, decided to enrol at a nearby school, where the average age of his classmates was just six. What followed was comic, heroic and potentially tragic, as the oldest pupil in the nation was mocked by local villagers, attacked for eating up precious resources but also invited to address UN delegates on the importance of primary education for all. The director makes this tale darker and richer by placing Maruge’s more recent battles in relation to his past as a Mau Mau fighter in the 1950s. Such scenes of insurrection and colonial kick-back are traumatically formative – they’re depicted in flashback, but tend to shift the film’s centre of gravity away from its real focus – the school itself. The young headmistress of the school struggles to keep Maruge on her premises in the face of opposition from local beerboys and pompous bureaucrats. It is her story as much as his; a tale of feminist defiance, which takes on male arrogance as well as the still potent forces of tribalism. It is a film that appeals and involves and its message about education for all could not be more timely.
Daily Telegraph 2010
This true story from Kenya has become an interesting and historically focussed feel-good movie. Kimani Maruge, an 84 year old, responded to the announcement of free education for all by calmly presenting himself at a primary school – in adult-sized uniform and baggy shorts. Justin Chadwick’s film shows some old wounds being re-opened as Maruge is a former Mau Mau fighter, tortured by the British in the 1950s. Government administrators and politicians are nervous of these memories being awakened and suspicious of Maruge’s star status with the international press. Maruge, for his part, is suspicious that these complacent politicians have tribal links with collaborators with the British in the bad old days. It’s a complex scenario but winds up telling a straightforward and heart-warming tale.
The Guardian 2010

What you thought about The First Grader

There were very high approval ratings for Justin Chadwick’s “moving and uplifting” film ‘The First Grader’. It was the “best kind of history lesson”, giving “a powerful view of the colonial past and the role of the Kikuyu and food for thought for the future”. Many responses picked out the word “powerful” and felt that, although the film was, at times, “hard to watch”, it was an “important insight into often hidden facts” and “showing the darker side of our history”. Nonetheless, the film was made with “compassion and understanding” and had “a heart-warming positive quality alongside the sadness and the shame”. There was universal praise for the “excellent performances” from Naomi Harris as Teacher Jane and Oliver Litondo as Maruge, in particular, and also for the “delightful energy of the children”. The role of Teacher Jane in the film caused several of you to applaud “the determination of independence of the young teacher” and to recognise, as the film did, “the vital role of education for all”. Several of you, while recognising the “poignancy of the situation” welcomed the fact that the film was critical of current politicians and bureaucrats in Kenya and that Maruge still needed to be “a campaigner for human rights and human dignity”. There were some minor reservations and criticisms. One or two responses felt that the “flashback sequences were clunky”, that the film was “too long” and the treatment both of past and present “over-sentimental and not as historically accurate as it seemed”. There was the feeling, too, that some of “the torture and killing scenes were too graphically demonstrated” and that the film “glossed over the atrocities of the Mau Mau”. For one member, the film “though captivating” lacked focus and gave “too many colours in the kaleidoscope” while, for another, it was simply “archetypal political correctness”. Overall, however, the film was a great success, “bursting with life”, “full of things to think about”, “a potent mixture of joy and pain” and demonstrating “great compassion and dignity”.