Of Horses and Men [Hross i oss]

Iceland’s Oscar submission, a darkly funny, inventive and very distinctive film set in a remote horse-riding community. It's a series of vignettes of horses and their owners, depicting struggles and romances, imbued with bone-dry humour and a memorably beautiful landscape. 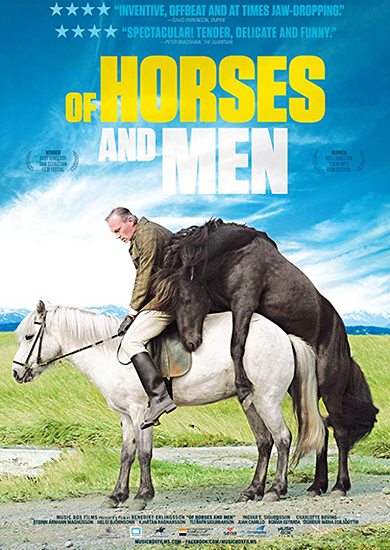 In a remote Icelandic community, the relationship between humans and horses is as close-knit as the relationships between people. Here is a society where man still relies on the horse for transport, livelihood and company. ‘Of Horses and Men’ flips between individual stories and events, in turn wry, tragic or fantastical. In one, a man rides his horse into the ocean towards a parting ship which he believes may have vodka on board. In another, a well-to-do farmer rides his newly-tamed mare to visit Solveig, a beautiful young lady. While neither tries to hide their affection for each other, nor does Solveig’s stallion hide his desire for the farmer’s mare. Part fable, part celebration, ‘Of Horses and Men’ marks the arrival of an accomplished and talented, if eccentric, new director.

"You can say the Icelandic Sagai are like episodes that intertwine. In essence, it comes down to an oral culture and telling stories. When you tell a story, it is told again and again, and you hear it and it changes a bit and becomes exaggerated. Stories formed in an oral tradition have that kind of character and I think, in a sense, the stories in the film are like that."

It is refreshing to see Iceland play itself for a change and one of the appealing characteristics of Benedikt Erlingsson’s début feature film is its portrayal of the country’s natural splendours. This is Iceland through domestic eyes, rendered as a homely place where people live, work and ride horses. The film is, in essence, a mosaic of loosely related vignettes with one thing in common: each revolves round the short-legged Icelandic ponies and the travails of the locals who tame and ride them. It has, therefore, a strong equine theme and a broad comic bent. Erlingsson’s idiosyncratic sense of humour is succinctly illustrated in several of the scenes, often by juxtaposing the absurd with the macabre. The tone of the film oscillates radically over different events, pain, poignancy and laughter in almost equal measure.

What you thought about Of Horses and Men [Hross i oss]

‘Of Horses and Men’ was given credit as an “unusual and non-mainstream film that a film society ought to show”. For some, it was “raw, but beautifully made” capturing the “harshness and bleakness of life” but within a context of “a clearly portrayed community”, with its own customs and expectations. Some in the audience were held by particular stories – the fencing and blinding incident, the swimming out to the Russian trawler – and the way in which the horses were “detached observers of human folly”. But it was also seen as “bizarre, bleak and brutal” with too much detail, albeit with dramatic power and the shock of the unexpected. Some felt “strange and uncertain” in their responses, but there was no doubt overall about the quality of the cinematography and the impact of the desolate Icelandic landscape. Several of the responses felt that alongside the “sheer beauty of the horses” the film gave a “convincing and authentic view of an Icelandic rural community”, with a “surprisingly entertaining” mix of the tragic, the everyday and the down-to-earth.