Tom Hardy plays Locke, a successful family man who receives a phone call that sets in motion a series of events that threaten his carefully cultivated existence. Engrossing character drama that takes place during a single car journey. 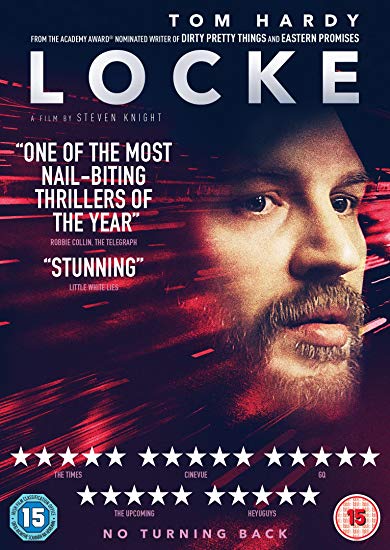 This is a bold and compelling film, a portrait of a man, Locke (Tom Hardy), in transit and in crisis. The film starts with Locke, a Welsh construction professional, leaving a Birmingham building site in his BMW – where he stays for the rest of the film, driving and making phone calls. His wife and two sons are expecting him home to watch a football match – but Locke tells them he won’t be back in time – nor will he be at work the next day. So why is this perennially reliable man going AWOL? Locke believes in doing the right thing – to an extent that can seem cold, pathological, even deluded. The film presents us with a man who quietly reveals far more about his psyche than he suspects. We only ever see a man in a car and hear voices over the phone, yet we picture so much of the off-screen world – the smooth-running but fragile equilibrium Locke has built at home, the professional network that holds his competence in profound respect. With some brilliance, Knight makes Locke’s car a compressed theatrical stage, catching the flow of traffic outside, the light show flickering on the windscreen. Overall, ‘Locke’ is a bold, evocative film, which builds up a detached picture of a world and a man’s life, with elegance, economy, an orange motorway glare and the occasional passing Eddie Stobart truck.

The Birmingham construction manager and title character of ‘Locke’, is leaving work on an otherwise ordinary night when, instead of turning left to go home, he turns right. After placing a call to an unknown person, Locke commences a 90 minute drive to London and the movie unfolds, a masterfully constructed, taut, engrossing one-man show. With every conversation, Locke’s own temperament comes into view – punctilious, conscientious, powered by belief in his own rectitude. He is a soft-spoken, even modestly elegant man, with the film turning out to have an unseen ghost in the back seat, as Locke tries to outrun, or heal, his own past. Despite Locke’s studiously even-tempered attempts to hold himself accountable for his decisions, the tension keeps inexorably building, thanks to the director’s canny command of pacing, structure and tone. Indeed it’s only in the final moment of his fateful journey that we realise how much we invested when he chose to make that right-hand turn instead of left.