Based on a stage hit, this musical is about two Scottish soldiers returning from Afghanistan, home to Leith (Edinburgh) to the warm embrace of their families. Exuberant and infectious, with music by The Proclaimers. 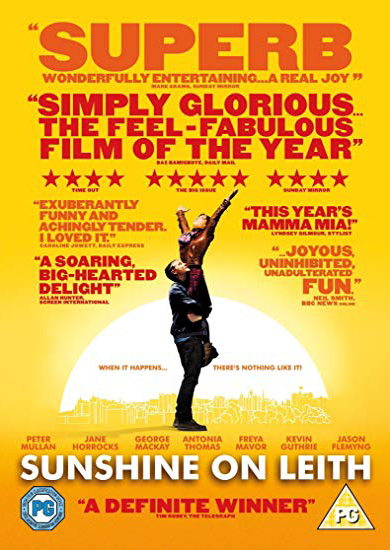 Starring: Peter Mullan, Jane Horrocks, George MacKay, Kevin Guthrie ‘Sunshine on Leith’ is a good-natured, likeable movie-musical, featuring the music of The Proclaimers and base on Dundee Repertory Theatre’s hit stage show. Dave and Ally, a couple of soldiers back from a tour in Afghanistan, are set on returning to civilian life for good and thrilled to be back in their glorious home town. The real emotional crisis comes with the silver wedding party for Davy’s troubled parents – a very warm and engaging performance from Jane Horrocks and punctuated with rousing, emotional Proclaimers’ songs. There are many very good moments – a notable scene at the beginning when Dave and Ally are in a convoy expecting imminent ambush or attack. They sing ‘Sky Takes the Soul’ and it’s powerful stuff, full of the theme of parting and loneliness, touching, poetic and other-worldly. Fletcher’s picturesque outdoor locations are very different from the Edinburgh of Ian Rankin or Irvine Welsh, but what makes it work are the performers, particularly Peter Mullan and Jane Horrocks, who give it their considerable all.
Peter Bradshaw - The Guardian
There is plenty to savour in ‘Sunshine on Leith’ a new musical film, directed by Dexter Fletcher, which leaves you with cask-strength capillary-reddening tingles of happiness that run to the very tip of your nose. Dave and Ally, two young squaddies newly returned to Edinburgh from service in Afghanistan, each find love waiting for them n the city’s port, Leith. Built around thirteen Proclaimers’ songs, the film features a brief cameo from Craig and Charlie Reid, but the face you are really waiting for is Peter Mullan’s. Mullan plays Rab, Davy’s dad, who serenades his wife (Jane Horrocks) at their 25th wedding anniversary ceilidh. Here is a face that is as much a craggy gift to a film-maker as Edinburgh’s smoke-grey skyline. This film is straightforwardly in love with the Scottish capital. The film’s romances and heartbreaks play out on cobbled streets and echoey tenement stair wells. The slotting together of songs and plot is often done with a spark of inspiration, recognising the country’s on-going struggle to keep its sons and daughters close. Fletcher proves he is adept at finding an authentically feel-good airiness in habitats. I lost track of how many times Fletcher’s film had made me break into a grin that could span the Firth of Forth.
Robbie Collins - Daily Telegraph October 2013

What you thought about Sunshine on Leith

The warm applause as the credits rolled showed how much the audience had enjoyed this “warm and ultimately feel-good movie”. You felt “engaged and involved” from the opening “terrifying version of war in Afghanistan” to the “celebration and affectionate portrayal of a real Scots community” – making the experience “exhilarating and highly emotional”. There was a direct response, too, to the “pain and difficulty of romantic relationships” and several responses commented on the “strength and reality of personal feelings” communicated by the film. Words such as “brilliant”, “fantastic”, “joyful”, “exuberant” and “energetic” abounded in many responses. Several members commented on the “strong sense of Scottishness” and the “feel of real people on the screen”, the “strong vein of humour and enjoyment” and the “amazing foot-tapping quality throughout”. There was great praise for the music – “simply the best” – and its unifying quality in the film overall. The term “uplifting” occurred more than once in responses, as did “raised the spirits”, “high spirits and fun”. The large set pieces – the 25th wedding party, the pub scene, the concluding sequences – were greatly enjoyed for their “vivacity, energy and sense of community celebration” giving a sense of “real happiness, rare indeed in today’s films” as one member commented. There was praise for Dexter Fletcher’s “skilled and subtle direction” and its powerful use of “the Leith port landscapes and the Edinburgh streets, alleys and the Art Gallery” to place the film in a “real and rooted context”. Alongside many comments expressing great pleasure in meeting George Mackay as an introduction to the film and how it gave an added dimension to what followed, there were many tributes to his strong performance. There was praise for Jane Horrocks as Davy’s mum and Peter Mullan as Davy’s dad, whose “portrayal of middle-aged marriage” was “a tender accompaniment to the boisterous energy of youth” and the “infectious music”. The film, for many of you, was “effervescent, heart-warming and tremendous fun” with “first class singing and choreography” and music “fully integrated into the developing story in a very thoughtful way”. One member wrote “the smile never left my face”, another “I’ll be humming the music for days”. There was no doubt, for many members, that the screening was a special occasion, thanks to George, and the film a great pleasure. One member summed it up thus: “Great mix of Scottish pleasure and pathos, seen through the bottom of a glass. Superb”.