Typical French comedy/drama about a high school teacher who gets drawn into a precocious student's story about his relationship with a friend's family. Stars Kristin Scott Thomas. 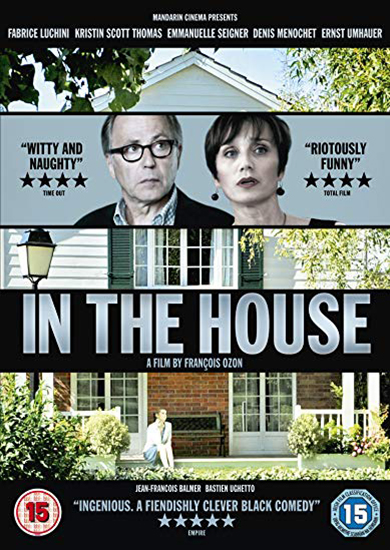 François Ozon’s clever psychological comedy is his best work to date, building on the reputation he already has in France for stylish, sophisticated movies. His new teasing comedy ‘In the House’ touches on a number of his recurrent concerns, among them the nature of creativity and stories within stories. It’s set in a secondary school in an unidentified French town, where the intense, humourless Germain teaches literature. Married, without children, in his mid 50s, Germain despises most of his fellow teachers for their conventional thinking and his pupils for their uniformity and lack of imagination. His wife Jeanne (Kristin Scott Thomas) runs a fashionable avant-garde art gallery. Suddenly Germain discovers a gifted pupil, 16 year old Claude, and is grabbed by the mixture of affection and satire in the student’s writing, as he writes of a fellow pupil’s seemingly perfect middle class life. He encourages Claude to chronicle their lives and becomes obsessed with the story of the family. Pupil and teacher enter into a form of conspiracy; the results are extremely funny, but Germain heads for disaster as a teacher and husband. The movie’s title refers not only to the house of Rapha and his family but also to Henry James’ famous ‘House of Fiction’ and what is created or indeed made up within it. The director and the audience are drawn together, imposing our narratives on what we see on the screen.
Philip French - The Observer 2013
This is a sophisticated comic thriller about the pleasures and perils of storytelling. When Germain, a middle-aged teacher of literature at a suburban secondary school, discovers a potential literary genius in his new class, in the form of Claude, a sly-eyed 16 year old, he is breathless with joy. The boy has written about the home life of a classmate, Rapha, whose home he has infiltrated and whose bourgeois lifestyle he envies. As Germain reads the bulletin from inside the house, he wants more but is in a quandary. He must encourage the boy’s talents, without endorsing his duplicity. Yet he is a sucker for a juicy yarn and is desperate to push forward this particular narrative. Ozon has explored the collapsible boundaries between art and life in other films, but this has an elegantly controlled, multi-layered structure and soon the boy is weaving the teacher and his wife into the story with a buzz of modern playfulness without ever losing its thriller credentials or its psychological credibility. The movie’s point is crisply made. Art can be hazardous: handle with care.
Ryan Gilbey - New Statesman 2013

What you thought about In the House

Members were “intrigued” “absorbed” and “caught up” in François Ozon’s “clever and chilling” film in almost equal measure. Several responses commented on its “stylish dramatic effectiveness” and its “subtle mixture of surprise and inevitability”. You were often “impressed but alarmed” by the “slick and sinister malevolence” of Claude, the 16 year old central figure, and the “frightening ease” by which he manipulated most of the mature adults with whom he came into contact. The structure of the film was “wonderful, a delight, engrossing right to the end”, making “sharp and justified satirical digs” both at the “delusion of teachers” and at “the absurdities of modern art”. There was “great fun” in the “edgy but dark” humour, throughout, and its “reflection on current fads and enthusiasms and their “cultural pretensions”. The “clever and subtle ways” the film speculated about “art and reality, fact and fiction” made the film “a very refreshing and absorbing challenge” to the viewer. The performances of the actors in the central roles were universally admired: “brilliant, wonderful, exactly judged, skilfully observed” as was the “understated but fantastically erotic atmosphere” created by the “hugely skilled ensemble playing by the cast”. It was, for one member, “a new version of ‘Tales of the Unexpected’, nouvelle vague brought up to date, in an engrossing way”. The film was also thought “to explore so many clichés and show them for what they are, in a clever and teasing way” which gave it a “distinctive intelligence” and made it “highly watchable”. The music in the film was also praised: “well-chosen, haunting, created mood and feeling very well”. There was some dissent from this overall praise and enjoyment. For some viewers, it was “too long, too complicated” and “too slow moving in its development”. Another response found it “too convoluted, not very convincing and, ultimately, rather silly”.