Set in Brazil, three kids make a discovery in a garbage dump and soon find themselves running from the cops and trying to right a terrible wrong. A film about poverty, hope, friendship and trying to do the right thing, no matter what. 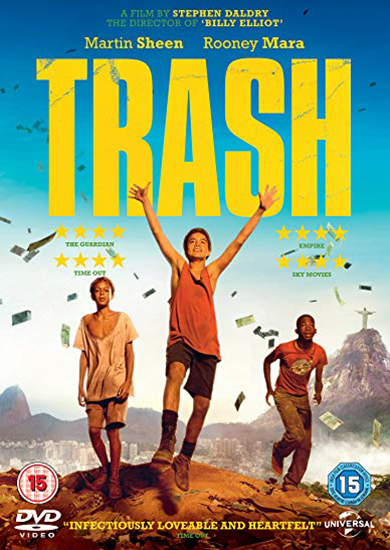 ‘Trash’ is an honourable addition to the list of films about Brazilian street kids stretching back to Hector Babenco’s ‘Pixote’ and Walter Salles’s ‘Central Station’. It is directed with tremendous energy by Stephen Daldry, who takes his tempo from Antonio Pinto’s hard-driving jazzy score. Three teenage litter pickers, Raphael, Gardo and Rato, are in possession of a wallet which draws them into a mystery involving corrupt politicians and an immense amount of stolen money. The kids are warriors, rebellious and with a hint of Huck Finn about them. Martin Sheen is an American priest working in the favelas alongside his assistant Olivia (Rooney Mara). Daldry makes very inventive use of locations which range from the vast municipal rubbish heap to rooftops and maze-like streets. The screenplay, written by Richard Curtis and adapted from Andy Mulligan’s novel, is ingeniously structured, if perhaps a little tidy and contrived. The power and rawness of the early scenes give way to a greater fantasy, wish-fulfilment elements as the story progresses to its final resolution.
Geoffrey Macnab The Independent 2015
The poster for Stephen Daldry’s latest film seems a dead giveaway – a trio of gleeful youngsters, banknotes raining down on them as the sun shines in the background. The plot – three street kids find a wallet in a garbage dump and adventures swiftly follow – confirms the impression of a cheery, family friendly film, featuring lovable urchins and an exotic location. In fact, ‘Trash’ is a full-throttle urban thriller, which delves deep into Rio’s dark sides of crushing poverty, political corruption and police brutality. It is this last element that it confronts most bluntly – when one of the ‘dumpster boys’ is violently abducted by the police, it’s accepted with glum resignation that he’ll never be seen again. This is not a cute story of wily scamps running rings round Plod; these are the kind of cops who view street kids as vermin and value their lives accordingly. ‘Trash’ indulges in very few clichés and pulls very few punches. It’s beautifully shot and bursting with energy, which emanates from the dynamite performances of Rickson Tevez, Gabriel Weinstein and Eduardo Luis, none of whom had any acting experience before they were cast. The other star is Rio itself – as alive as ever but not playing the glamour puss this time. In conclusion, another winner from Stephen Daldry, with a cracking script from Richard Curtis, brilliantly served by the three leads.
Simon Braund Empire Review 2015

What you thought about Trash

There was a warm and enthusiastic response to Stephen Daldry’s 'Trash' – a “fast-moving tension-packed thriller with a strong moral purpose” as one member put it. Many responses began with a very positive reaction to and pleasure in the quality of the three lead actors – all new to film acting: “superb performances”, “brilliant and thoroughly convincing”, “perfectly communicating a range of feelings from anger and outrage to cheeky humour”. You admired their “courage and resilience”, “persistent and creative opportunism”, the “inventiveness and determination” as communicated by these “stellar performances”. Many responses were impressed by the simple precept “Do what is right”, and the way this message was woven into the action and events of the film. The quality of the direction was also admired – “overhead shots of the gigantic waste heaps”, “the use of dark stairways, levels and corridors of the favelas” to provide a visual context for the corruption of politics and the “pitiless violence” of the police. The camera work was never “soft and sentimental” or “attractive for its own sake”, but “always served the purposes and pace of the film’s compelling narrative” and its “well-crafted story-telling”. Several members commented on the dramatic effectiveness of the video made by the boys, giving an insight into their motives and feelings, and thus “enlarging the moral perspectives of the film”. There was also a general pleasure in the way the film ended, but one or two wondered if the “terrible inequalities and injustices could, in reality, ever be overcome”. The “energy and imagination in the film” also gave great pleasure; for some this was in small details like the drawing of Gabriel, sad then happy, and the coded message which led to the money. It was the combined skill of director and cast which enabled the film to “have a fine but real message and never become sentimental” and yet to “convey the brutality, poverty and corruption of political life”. The overall judgement of members, then, as reflected in the responses, was of “excellent acting”, “imaginative filming”, a “heart-warming story despite the levels of corruption and brutality”. For many of you it was “right that good intentions carried the day” but there was also the view expressed that the film “deviated into fairy land at the end”.