A ten-year-old prodigy wins a prize for his discovery of a perpetual motion machine and sets out on a freight train across America to receive an award at the Smithsonian Institute. 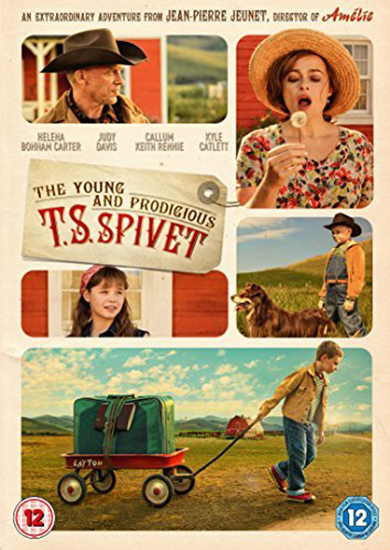 This adaptation of Reif Larsen’s book ‘The Selected Works of T.S. Spivet’ takes gleeful visual pleasure in the tale of a young genius from Montana, who runs away to the Smithsonian Institute in Washington, after apparently inventing a perpetual motion machine. Like Martin Scorsese’s ‘Hugo’ which also featured a young boy at large in an automated world, this poignantly playful film finds its way into a lost world of machines (and situations), the complex workings of which are always on view. With its deliberately over-bright palette and imposing vistas, ‘T.S. Spivet’ has plenty to dazzle the eye, with diagrams and illustrations floating from the screen as our young boy’s imagination dissects the world around him. In the title role, Kyle Catlett blends adult imagination and childish innocence with ease.
Mark Kermode - The Observer 2014
As he did in ‘Amelie’, French film-maker Jean-Pierre Jeunet tells a simple fable with witty visuals, colourful characters and a warm heart. It’s a winning story of tenacity that will resonate with anyone who has ever felt like an outsider in their own family. So, even though the film has a light spirit, it has a strong, emotional kick. On a sprawling Montana farm, 10 year old T.S. couldn’t be much more different from this twin brother Layton, his teen sister Grace and his insect-obsessed mother (Helena Bonham Carter). So no-one notices when he enters his perpetual-motion machine into a competition and wins a top accolade from the Smithsonian Institute in Washington. He has to run away from home and hitch-hike cross-country to accept his award. Told through T.S.’s perspective, this is a story about discovery. T.S. may think he can do anything a grown-up can do, but there are some very hard truths waiting on the road and back home. Kyle Catlett is terrific on screen, holding the film together with a bright-eyed, fiercely articulate performance. And he gets superb support from all the rest of the cast. With superb visual perspectives and great imaginative insight, the film has a core emotional truth and is powerfully moving.
Rich Cline Contact Review 2014

What you thought about The Young and Prodigious T. S. Spivet

There was an enthusiastic and positive response to Jean-Pierre Jeunet’s “warm, charming and enjoyable film” which “both touched the heart and pleased the eye” as one member put it. The film had, for many in the audience, “a delightful and original story, a powerful onward narrative and stunning visual qualities”. Many of you admired “an old -fashioned quality, full of heart and original characters” and found “pleasure and re-assurance” in the way the film “explored family, grief, guilt and the silences about them”. The film, with Jeunet’s “clever and sensitive direction” had “a magical quality” which moved “like a fairy-tale towards reconciliation”. “Creative, moving and funny” were frequently used by members in their praise of the film. The “spirit of adventure” and “determination to discover a different world” struck a semi-nostalgic note for some in the audience, evoking films enjoyed in childhood. The triumph of “intelligent innocence” over “cynical media exploitation” gave the film “a positive sense of direction in the midst of fantasy elements”. There was considerable pleasure in the “rich colour palette” of the film “encapsulating a child’s perspective and growing understanding”. Almost every response recognised an exceptional performance from Kyle Catlett as T S Spivet, creating “innocence, integrity, honesty and determination” in a remarkable way on screen. There was praise for Helena Bonham-Carter and for a “range of superb performances from characters encountered on T S Spivet’s journey”. It was, said one member, “the perfect antidote to Leviathan”; another summed up the positive reactions of many in the audience: “A real, off-the-wall, feel-good factor movie”. The commonest criticism voiced was the difficulty of hearing the dialogue clearly. Many of the responses mentioned this, with regret, as it diminished the pleasure and impact of the film. Some in the audience had other reservations – that the film was “too whimsical”, “rather cutesy”, “lacked substance, too frothy and unbelievable”. It had “only one idea, admittedly extremely well portrayed, but went on far too long” and was “a bit of a curate’s egg”. For one member in the audience “the scenery was the only worthwhile part”, while another found it “a weak and sentimental fantasy with no obvious point”.