A lonely writer (Joaquin Phoenix) develops an unlikely relationship with his newly purchased operating system (Scarlett Johansson) designed to meet his every need. Cyber romance and the intricate workings of human emotion. 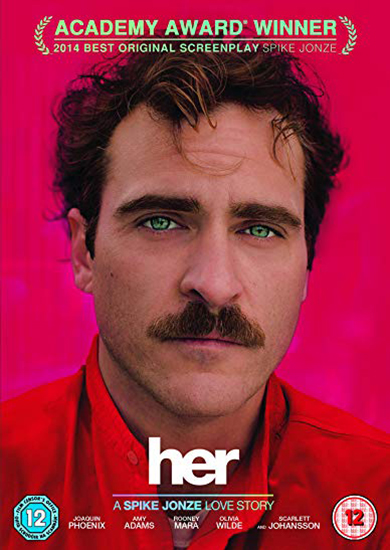 As far as sci-fi cinema is concerned, there’s nothing unusual about falling in love with a computer or conjuring your perfect partner from a keyboard. Within this evolving electronic ecosystem, the premise of Spike Jonze’s modern romance seems like business as usual, as Joaquin Phoenix’s soon-to-be divorcee finds unexpected happiness with an operating system (OS) tailor-made to put him at his ease. Phoenix plays Theodore Twombly, a twitchy, tortured soul whose job is writing personalised e-letters for those unable to put their feelings into words. He falls for the seductive skills of an electronic office organiser that reads him like a book and offers him unquestioning allegiance in the light of his failed marriage. Soon Theodore is having the kind of cybersex that has proved the preferred method of interaction for isolated online lovers the world over. But, as Theodore grows in confidence, so does Samantha, the infinite portals of the virtual world enabling her to become so much more than the sum of his parts. As he falls for Samantha, so Theodore withdraws from the world, suggesting that the last thing on earth Theodore wants is human touch. Visually, ‘Her’ is stunning, a mesmerising portrait of the near future, with people locked into their own virtual worlds. However, the battle between heart and head, and consequent emotional isolation, leaves the viewer smiling wryly at the film’s thought-provoking quality.
Mark Kermode The Guardian February 2014
Everyone in the film is frighteningly well groomed and dressed, smart-casual in pastel tones and not least in that vogue is the initially sad protagonist, Theodore Twombly (Joaquin Phoenix), suffering the throes of the break-up of his marriage. Finding it hard to hide his melancholy, Theodore thinks about computer dating but, when he hears about a new operating system that offers an intuitive virtual companion, he buys one and dons the earpiece and dot camera that will change his life. His OS is called Samantha; she does not come on as an artificial intelligence but as a fascinating and fascinated fantasy partner-in-life. Theodore is soon enraptured by her and she seems to want to gorge on real human experience. ‘Her’ is an unapologetic love-story, except that one half of the couple remains invisible. The film takes its romance as seriously as it does its insights into the way we use electronic media and what it’s doing to us. Jonze and his actors go all out to make the relationship seem real. The film is really sharp about how lonely so many people are and how modern communications only paper over such problems – an apt diagnosis of contemporary ills.
Nick Jones Sight and Sound January 2014

What you thought about Her

There was plenty to think about in Spike Jonze’s film and a consequent range of views and opinions on the world the film created – “a ‘Brave New World’ that turned out not to be so brave after all”, as one member put it. Absorbed in the picture of “a frighteningly close future”, many of you described the film as “fascinating”, “highly original”, “intriguing”, “captivating” and “mesmerising” – a “brilliant metaphor for modern society’s relationship with technology”. It had, for several in the audience, “many nuances and a multi-layered quality” offering a “dystopic and perhaps prophetic image of the future of human relationships”. Many in the audience admired “the intelligence and intriguing quality of the film”, “very inventive” in its view of technology, and as several responses also commented “with startling flashes of humour”. “The essential and melancholic loneliness” of the central character, Theodore Twombly (Joaquin Phoenix), gave the film a dramatic focus, and there was much praise in many responses for this “intelligent and bravura” performance. For some in the audience, the concluding sequence restored “some faith and hope in real human relationships rather than the seductive ease of the electronic personalities”. It was, for those who enjoyed it, “full of warnings for human society” and “a reminder of the extent to which “many people feel permanently alone”. However, an original film speculating about the future is bound to divide opinion. A number of responses found it “weird, sad and troubling”, “intriguing but inconclusive” “over-elaborate to the point of tedium”, “challenging idea but boring in its execution”. The characters in the film “were too superficial to be interesting” but the overall impact of the film “depressingly true”. There were many who felt that, despite the originality of the film, it was “far too long and repetitive to create real involvement with the world it portrayed”. Some responses were more scathing: “boring and self-indulgent”, “bizarre and depressing”, “incoherent”, “lacking power and direction and far too long”. It was “an interesting concept ruined by mumbled dialogue”, and for one in the audience its only redeeming feature was the music!